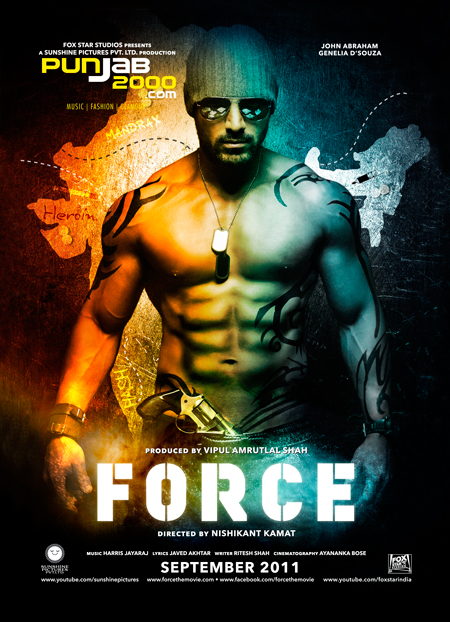 Two of India’s hottest stars John Abraham and Genelia D’Souza are paired together in National Award winning director Nishikant Kamat’s forthcoming film ‘'FORCE', one of the most awaited action romance films of the year. Releasing in cinemas across UK and worldwide on 30th September 2011 through Twentieth Century Fox, 'FORCE' is a contemporary action romance and a Hindi reinterpretation of the Tamil blockbuster, 'Kaakha Kaakha', which achieved widespread popularity among audiences and critics alike.

At the heart of the action-love story is a renegade cop, played by John Abraham, in relentless pursuit of a ruthless, underworld gangster. He believes that the only way to eradicate crime is to give criminals the bullet – not hand cuffs. Sharing screen space with John is one of the most vivacious and exuberant talents to join the ranks of Indian screen beauties, as Genelia D'Souza plays John's love interest. 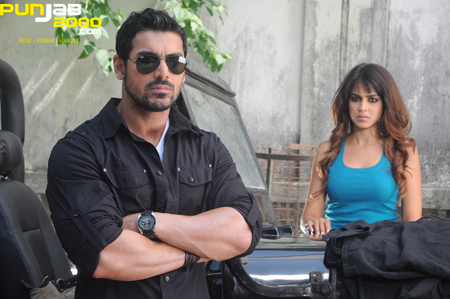 The songs from ‘FORCE’ are already populating the airwaves. The seat-grabbing suspense is perfectly balanced with a passionate and melodious music soundtrack, masterfully composed by one of the leading Indian music directors, Harris Jayaraj. Some of the top tracks include ‘Khawbon Khawbon’ which is a fast-paced romantic song sung by the renowned singer Kay Kay. Another song that has topped the charts is ‘Chahoon Bhi’ which is a quintessential Hindi romantic track. Another romantic song that stands out is ‘Main Chali’, a mix of melody and beats which is beautifully sung by Shreya Goshal and Naresh Iyer. Adding one more hit song to the soundtrack is the fresh and innovative track ‘Dil Ki Hai Tammana’.

Lalit Pandit, who composed the 2010 hit song “Munni Badnam Hui” guest composes the song ‘Dum Hai to Aaja’ for “FORCE”, which is teamed with great lyrics and vocals.

To celebrate the release of ‘FORCE’ in cinemas, we are giving away two CDs for the music soundtrack for FORCE. For your chance to win, simply answer the following question and send your replies to [email protected]

Q.    Who composed the music of FORCE soundtrack?

11 years ago in Latest
Bling PRBlu RayBollywoodBollywoodmusic.co.ukCDCinemaDhoomDostanaDVDFilmHarris JayarajHindiJohn Abraham and Genelia D’SouzaJOHN ABRAHAM UNVEILS HIS 8-PACK PHYSIQUE FOR HIS UPCOMING FILM 'FORCE'FEEL THE ‘FORCE’ WHEN THE ACTION UNFOLDS ON SCREENSLatest NewsMovieMp3Mp4Musicnutters.comNew YorkNewsOSTPunjab2000.comSoundtrackWIN! CD SOUNDTRACKS FOR FORCE How to get the “FORCE” John Abraham Eight-Pack! John Abraham and Genelia D’Souza’s sizzling chemistry in ‘Force’Hollywood impressed by ‘Force’