Bollywood superstar Akshay Kumar is all set to thrill audiences with his portrayal of a Haryanvi gangster with a heart-warming edge, in his new action-entertainer ‘Boss’, directed by Tony D’Souza.

‘Boss’ is produced by Viacom18 Motion Pictures in association with Cape of Good Films and Ashwin Varde Productions, and releases internationally on 16th October 2013 through Krian Media and in the UK through Tip Top Entertainment.

Akshay Kumar dons the role of ‘Boss’ and veteran actor Mithun Chakraborty will enact the role of his weary father. Debutant star Shiv Pandit portrays Boss’s younger brother and the scintillating Aditi Rao Hydari plays Shiv’s love interest. The film also sees yesteryear actor Danny Denzongpa perform the role of Boss’s mentor while Ronit Roy plays a ruthless police officer who is pitted against ‘Boss’. Comedic hero Johnny Lever adds to the entertainment quotient in the film along with actor Parikshit Sahni. What’s more, ‘Boss’ pairs up with Dance supremo Prabhu Deva where he makes a special appearance in the track ‘Hum Na Tode Phode’ with zeal as well as starlett Sonakshi Sinha for the chart-buster ‘Party All Night’.

‘Boss’ has become the talk of the town and industry insiders have already started calling the film a sure shot blockbuster, given the winning combination of action, comedy, and adrenaline-pumping music. To exemplify the entertainment variety that ‘Boss’ boasts, the tracks have been composed various leading musicians including Meet Bros Anjjan for the title track and Yo Yo Honey Singh for the party anthem. The melodic ‘Har Kisi Ko’ is composed by Chirantan Bhatt which takes audiences back to the eighties groove.

‘Boss’ is an entertaining blockbuster with an exemplary cast, which promises to wow the audience with enticing action, comical nuances and riveting performances from the best of Bollywood.

To celebrate the release of ‘BOSS’ in cinemas, we are giving away a special ring and a T-shirt from the film. For your chance to win, simply answer the following question and send your replies to [email protected] by the 5th Oct 2013, with your full name, postal address & mobile number. Entry’s received with out will not be counted.

Q.   What is the name of the actor who plays the role of ‘BOSS’ in the film? 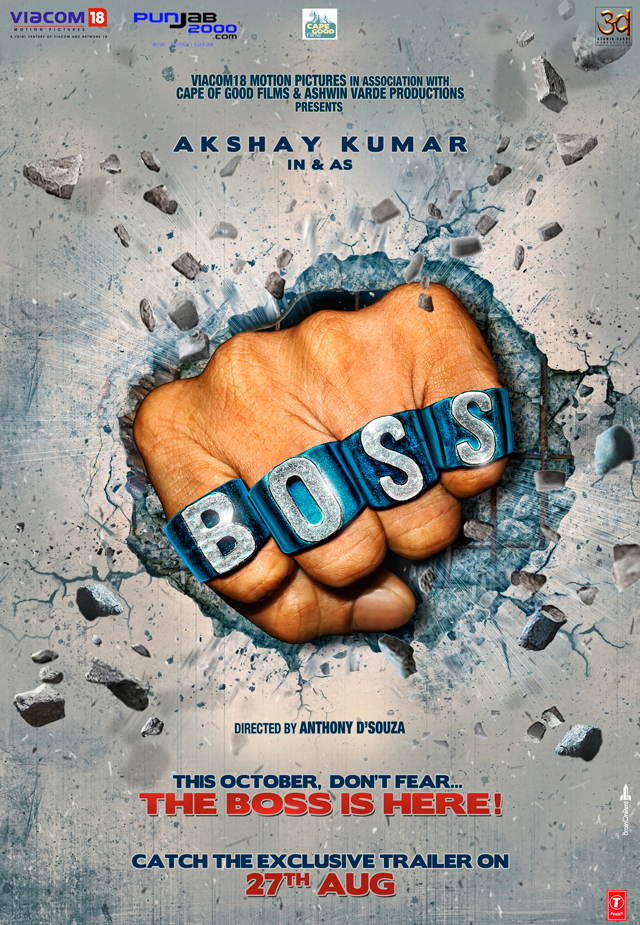