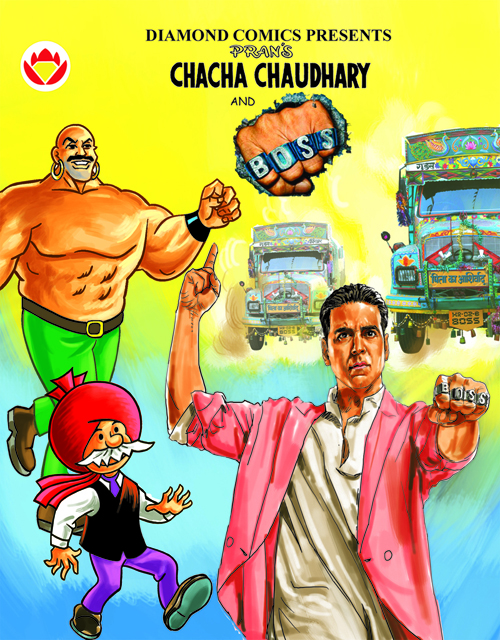 The Special Edition of the comic book to be launched by Akshay Kumar in Delhi!!

We all have grown up reading one of the most popular comic books of India ‘Chacha Chaudhary’  which has become a cult brand & has sold over 10 million copies over the years!

‘Chacha Chaudhary’ is our country’s most favorite comic and there have been generations who have been reading this classic, and for the first time in the history of Indian Comic Books Chacha Chaudhary will have a tie-up with Bollywood, in Akshay Kumar’s forthcoming film ‘BOSS’

Well! There is certain kind of similarity between BOSS & ‘Chacha Chaudhary’, who is a middle class Indian, frail but very intelligent old man and helps people in distress by solving their problem, on the other hand our BOSS -Akshay Kumar also helps people who are in trouble but in his own fun way!

This special edition of comic which will be printed in English & Hindi will be launched officially by Akshay Kumar in Delhi himself who has been a huge fan of this comic since his childhood days.

When quizzed Akshay about it, he excitedly said, “I have been a fan of Chacha Chaudhary and Sabu since my childhood. I feel honored that my character of BOSS will now be featured alongside them in a special comic book.”

The story is going to be new for this particular edition and will revolve around the theme of the comic where the BOSS Akshay Kumar will join Chacha Chaudhary & help him fight out the enemies!

Speaking about the tie-up of BOSS with Chacha Chaudhary Head of Marketing of Viacom 18 Motion Pictures Rudrarup Dutta said, “Chacha Chaudhary is a legendary Indian character, an entire generation has grown up reading Diamond Comics’ Chacha Chaudhary. This special edition will have the BOSS ‘Akshay Kumar’ join the team to vanquish their enemies. Apart from a unique medium which connects with the target audience, especially children to promote the film it also is a matter of pride to be part of this ‘collector’s  edition’ of one of the most loved Indian comic books