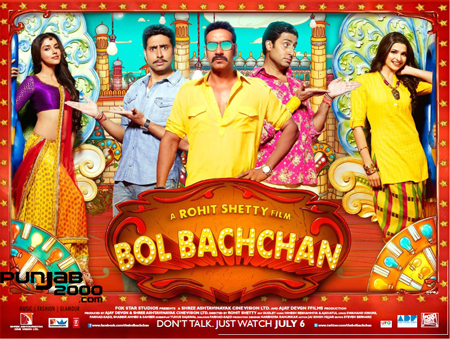 Director Rohit Shetty is back with yet another entertainer film this year with ‘Bol Bachchan’ The film, which is presented by Fox Star Studios and is produced by Shree Ashtavinayak Cinevision Ltd and Ajay Devgn Ffilms, is released on 6th July 2012 by Twentieth Century Fox.

Bol Bachchan marks the return of the super-hit pairing of Ajay Devgn and Rohit Shetty, who have been ruling the box office with blockbuster films ‘Golmaal 3’ and ‘Singham’. Joining the magnificent duo in this upcoming action-comic extravaganza is none other than the uber-cool Abhishek Bachchan. The lead cast also includes Asin and Prachi Desai opposite Ajay and Abhishek respectively.

The film boasts of hilarious gags and jaw-dropping action sequences which are a trademark of Rohit Shetty’s commercial Bollywood cinema. Coupled with a magnificent cast, these are just a few reasons why Bol Bachchan is touted as one of the biggest and most eagerly awaited films of the year.

Ajay Devgn will be seen playing a tough Pehelwan (wrestler) in this hilarious comedy, and praises for his look and character in the film have already started pouring in. Adding a new flavour to the film will be the comic timing of Abhishek Bachchan, who plays two very different characters.

The soundtrack has catchy numbers by talented singer-composer Himesh Reshammiya and the music powerhouse duo Ajay-Atul. The title song, 'Bol Bachchan' is a peppy track sung by legend Amitabh Bachchan with Abhishek and Ajay also lending their vocals! 'Jabse Dekhi Hai', a melodious song sung by Mohit Chauhan, boasts a 90's feel. One of the most entertaining songs in the film, ‘Chalao Na Naino Se' has glimpses from the 1951 hit song Bholi surat dil ke khote, from Albela,

To celebrate the release of ‘Bol Bachchan’ in cinemas, we are giving away 5 CDs of the film’s music soundtrack / or 2 pairs of tickets (1 pair per person). . For your chance to win, simply answer the following question and send your replies to [email protected]

Q.    What is the name of the title track from ‘Bol Bachchan?   Bol Bachchan revolves around the story of a young Delhi boy, Abbas Ali (Abhishek Bachchan) who comes to Rakanpur to earn a living and to take care of his sister Sania (Asin). Under odd circumstances Abbas lies to the Akhada King aka Ajay Devgn and what ensues is a tale of comical consequences!
A series of lies, confused identities, fun filled action and some hilarious performances makes Bol Bachchan a must see film this Summer   Bol Bachchan is released by Twentieth Century Fox nationwide on 6th July 2012. 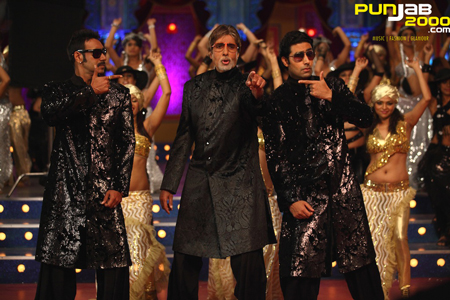