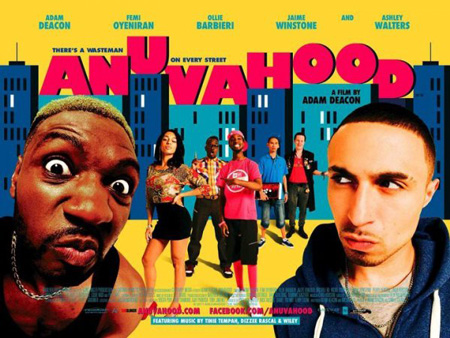 Revolver Entertainment presents the UK’s first-ever Urban Comedy from Writer, Director and Actor Adam Deacon (KIDULTHOOD/SHANK), delivering a hilarious satirical spoof of the ‘hoodie’ movie, and paying tribute references to the likes of cult American classics such as FRIDAY and HOUSE PARTY.

Following the recent conveyor belt of gritty and dramatic urban films, ANUVAHOOD is a comedic coming of age story that adds a refreshing air of levity to the urban genre.
It chronicles the desperate but determined attempts of hapless hero Kenneth (Adam Deacon), to become a respected gangster and urban music artist – or to put it anuva-way, to get rich or cry trying.

Kenneth has just lost his job at Laimsbury’s, the bailiffs are banging on the door, and the local estate sees him as a “wasteman”. When his attempt at drug dealing attracts the attention of resident bully Tyrone (Richie Campbell), the whole gang is in trouble. Kenneth is forced to decide who he wants to be and what he’s prepared to do to make things right – even if it means standing up to Tyrone on his own.

Shot on-location in West London, ANUVAHOOD is a hysterical trip through London’s concrete jungle; featuring a host of colourful, comical characters along the way where their well-intentioned antics inevitably result in hysterical consequences.

“If I can get people going to the cinema and forgetting about all their stress and worries then I’ll be happy…it’s just showing people that it’s not all doom and gloom in London council estates.
I [also] found that with comedy, you can get into people’s minds without realising you’re educating them. I just hope people can relate to this movie and I think that the strongest message of all is be yourself and don’t be a sheep, don’t follow the crowd.” – Adam Deacon