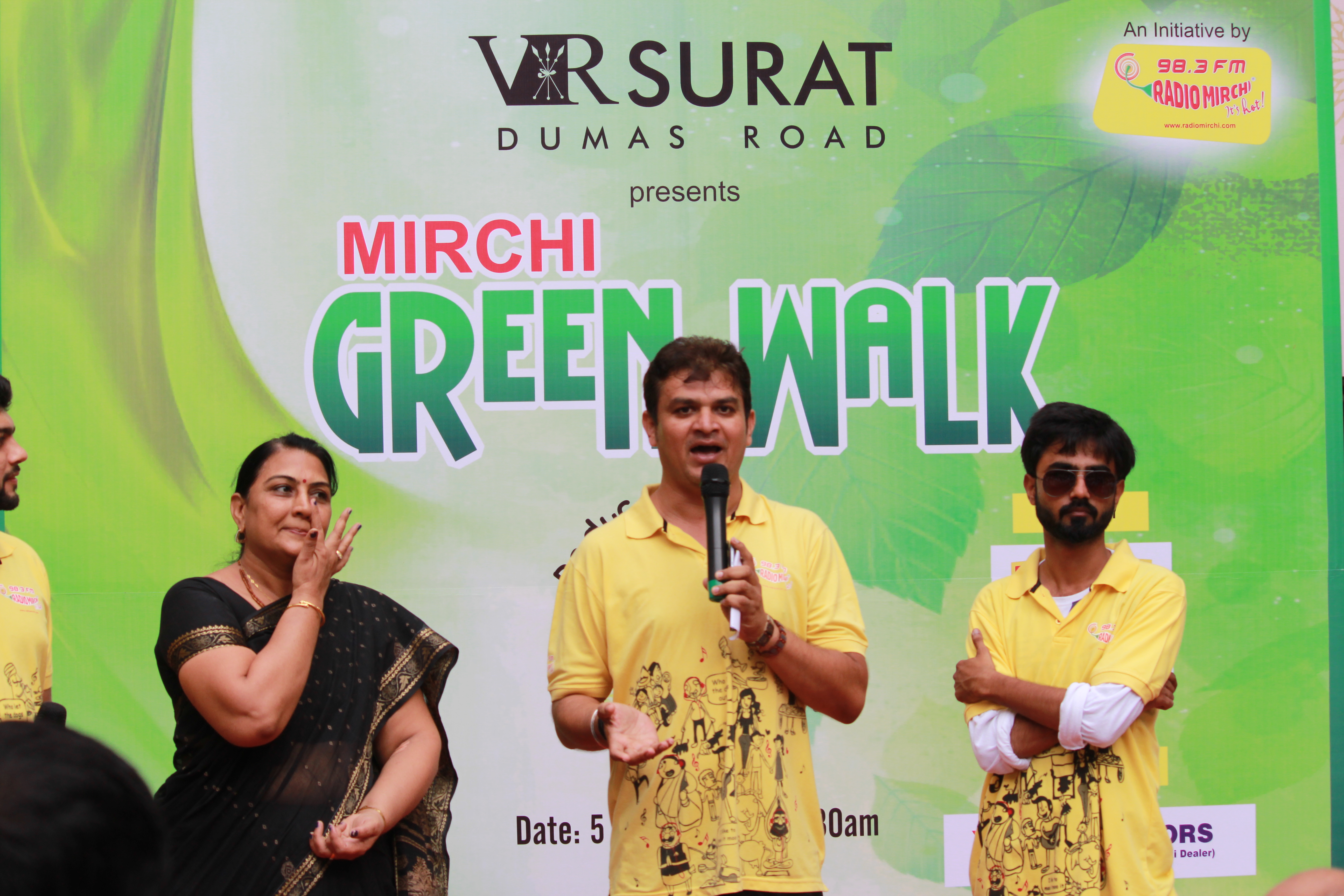 Mirchi Green Walk, One Of The Most Anticipated Days For World Environment Day – Green steps with Radio Mirchi!

How do you generate interest for World Environment day and create awareness for the need to go green, be fit and encourage recycling?

Well for nearly 2 weeks Radio Mirchi RJs Rahil, Harsh and Utsav took to the airwaves and lead a very fun, cool green activity to motivate people to not only think green but do green as well!

Each time a free form was picked up from the Mirchi studios, participants were given a green sapling to take home and plant from the local Surat Municipal Corporation.

A day before the event, people were invited to the studios to come back with the saplings and be a part of the Healthy Sapling contest!

So getting over 3000 registrations for the Mirchi Green Walk wasn’t easy. Just how do you get people to wake up on a Sunday summer morning at 6am?

‘Radio has always proved to be a medium of change, one that helps spread messages of concern and create an impact for the community. With the Mirchi Green Walk… that’s what we wanted to drive people to do! Plant more, think green and stay fit doing it all!’ says Samit Shah, Station Director, Radio Mirchi.

‘We asked people to forget their cars for 90 mins! Bring their families, friends, pets and groups that supported going green… like the Surat Cycling group etc. People were encouraged to bring banners relating to the cause and do the fun walk! RJ Harsh also arranged for the local BRTS bus service to offer special bus routes to encourage the use of public transport.’

But it didn’t just stop there!

To create further madness, the RJs played around with the idea of the backward walk.

As walkers reached the middle point, they were asked to walk for two minutes backward pushing the message- What if all of this didn’t exist anymore? What you see today… do you want it to vanish?

Held annually, the Mirchi Green Walk is one the most anticipated activities for World Environment day in Surat, India. This year the activity was partnered by some of the biggest names within the community which helped spread the word and generate a huge amount of interest with the help of social media within Gujarat.

Presented by VR SURAT and powered by TGB CAKES & Bakery. Shree Gokulam joined in as Associate partner while the fantastic new Lead Card by Dhru Motors -Maruti Suzuki authorized dealer also joined in partnership for this noble cause.

Enthusiasts ranging from various age groups, NGOs, firms and social groups kickstarted the event at 6.30am from Sargam Shopping Centre.

Samit Shah, Radio Mirchi, Station Director added, “We’d love for people to embrace a fitter, healthier and greener life! Each year with the Mirchi Green Walk we aim to bring people one step closer towards a greener Surat!”