Ali Zafar and Aditi Rao Hydari, who were taking a break from filming whilst the crew set up the next scene at London’s busiest airport, decided to put their ‘downtime’ to good use and rehearse their upcoming lines.

The pair, who play lovers who are set apart by distance in the film, were mock ‘arguing’ about the subject of immigration and missing their flight, when one helpful passenger, who was blissfully unaware that a Bollywood film was being shot, stepped up, interrupted the actors, and said: “Don’t worry my dear, you have plenty of time, you won’t miss the flight.”

Commenting on the incident, lead actress Aditi Rao Hydari, who plays the young and studious ‘Lalitha’ in the film, says: “Ali and I were rehearsing our lines about immigrations and missing flights. So, one of the passengers took it seriously and tried to be helpful. And he immediately told us, ‘don’t worry, you won’t miss your flight.” She adds: “And since the camera was placed in a corner of the airport, he (their co-passenger) couldn’t spot it. But we had to tell him it’s a film shoot and not to take it seriously.” ‘London Paris New York’ is the ultimate modern love story for 2012 and tells the quirky tale of two star-crossed, twenty-somethings, who find themselves drawn to each other in the most unlikely of circumstances, amidst the exciting backdrop of three of the world’s most vibrant cities – London, Paris and New York. 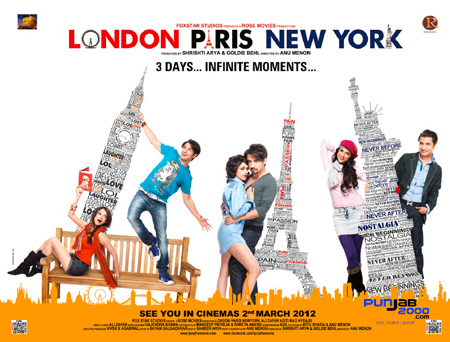 The film is a coming-of-age comedy designed to appeal to the youth, and speaks their language, reflects their aspirations and portrays the angst and joys of falling in love. ‘London Paris New York’ is released through Twentieth Century Fox on 2nd March 2012.