As you may or may not know already, to raise awareness for Comic Relief this year, iv decided to put myself up forward in Challenge Dipps for RND 07! The suggestions from the listeners to the Weekend Punjabi Show were used to finalise the 3 challenges to vote for online and you can get voting now!

DCS have been a band longer than I have been alive, that says it all doesn’t it? For a band to have been consistently at the higher echelons of the Bhangra market for over 24 years goes a long way in proving there undoubted talent.

A group of individuals who are currently the best live band on the scene, and probably one of the best ever. With the vocals of Shin who now takes his place as one of the best British born punjabi vocalists of all time, alongside the actual band who together can play more instruments than I’ve had round rotiya.

There importance to the survival of the live band scene has been unquestioned, and as live bands are making a come back in Bhangra, DCS have made there own comeback. 8 years after the superb ‘Punjabi Dance Nation’ DCS are back to give us this; "Desi Culture Shock".

The album contains a massive 14 tracks with special appearances from the likes of Juggy D and Jaspinder Narula. A double CD album, and you even get a poster of DCS…. I bet girls up and down the country will be sticking that on there walls! Anyway enough of poking fun, will DCS prove that they are like fine wine, getting better with age, or is this just another cliché comeback? Read on to find out! 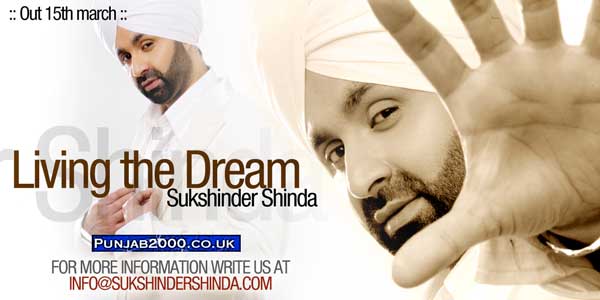 For those who are familiar with the sound of ‘The Music Man’ Sukshinder Shinda and his expanse of music, prepare yourself for the next step to a musical utopia via his fourth solo project ‘Living The Dream’. His evolution is an album well worth the wait to back up the worldwide hit of 2006 ‘Collaborations’.