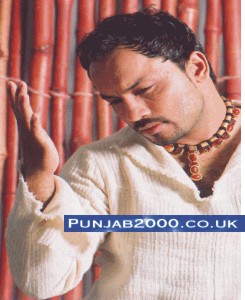 In December of 1993 the band members parted ways and Najam Sheraz began working on his solo career. His first solo single 'In Sae Nain' was released in September 1994. It was an instant hit, selling more than 300,000 copies. 'Sohna Chata Hoon' his second single received critical acclaim with its release in March 1995. It was soon followed by the release of his first solo album 'Khazana' in February 1996 and the video release of 'Larki' which brought him to the forefront of the musical mainstream. 'Khazana' sold a million copies, supported by the videos 'Aajana' 'Yeh Baat Kise Maloom Nahin' and 'Pyar Ki Piyas'. This album took Najam on his first foreign tour to Bahrain where he achieved huge success.

His next project was an experimental album, an eastern classical-rock fusion called 'Rakh Aas' with the band Karavan in November 1997.

His second solo album 'Roop Nagar' was released in 1999 in Pakistan. Its first video release 'Pal Do Pal Ki Chahat' was the first 35mm music video to be produced in Pakistan ever. Najam was instantly signed by Pepsi Cola International in Pakistan and BMG-Cresendo in India. This Album took him on his first US-Canadian Tour to more that 10 cities and to Kuwait where he was the first Pakistani ever to perform. Both tours were well accomplished and the Kuwaiti tour especially received rave reviews.

His first international release in 2000 was named 'Pal Do Pal Ki Chahat'. In the same year 20th Century Fox was about to launch a collaborative project, film 'Split Wide Open' directed by Dev Benegal. His song 'Mera Jee Nahin Laage' was included on the soundtrack along with other artists like Air Supply, Asha Bhosle and Garbage.

His interviews were aired on MTV, Music Asia and B4U. With this achievement Najam Sheraz became the second Pakistani artist after Nusrat Fateh Ali Khan to be included on the soundtrack for an international film.

In the Ramadan of 2002 the nation was captured by the power of the Hamd 'Yeh Moamla Koi Aur Hai'. Its intensity and spirit left spellbound audiences in tears of atonement and hope. It has become such a phenomenon that it precedes every concert performance and audiences of every age and creed join voices in its recitation.

14 August 2003 saw the launch of 2 diverse National songs, 'Hamari Pehchan' and 'Gillay Shikway Sub Bhula Do'. 'Hamari Pehchan' was directed towards raising the national spirit whereas 'Gillay Shikway Sub Bhula Do' focused on reuniting towards peace and brotherhood. Two cities witnessed the enthralling Independence Day performances of Najam Sheraz on his tour of Norway.

'Shahpar' an Air Force song was released on 6th September 2003.