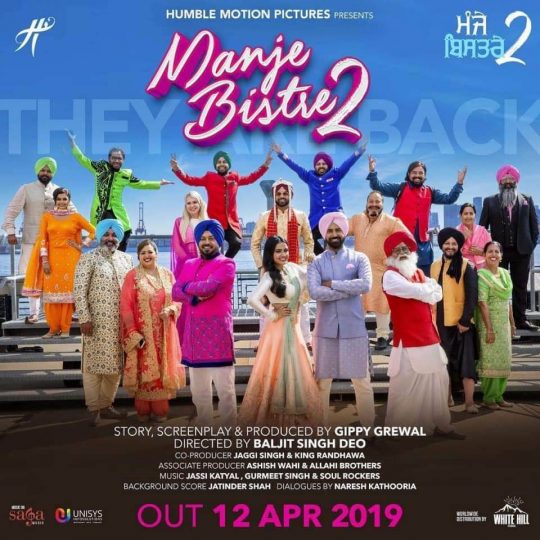 Manje Bistre 2 Trailer Released: A bit of romance and a slice of old Punjabi culture served with oodles of comic punches; is truly what Manje Bistre 2 trailer is about!
The trailer of the much talked about film Manje Bistre 2’s has just dropped in today, and it’s a laugh riot! The plethora of Punjabi artists on one screen, once again, a feast to the eyes. The makers have released the trailer on the official YouTube channel of Saga Music, and within no time it has become the talk of the town. The audiences are going gaga over this, and are showering the artists, and the entire team with positive comments. The film has already gained a lot of popularity, amongst netizens, with the release of the film’s title track, and second track ‘Current’. The social media is flooded with short dance videos, and dialogues of the film.

Talking about the film’s trailer; it seems a beautiful blend of budding love between the film’s lead pair- Gippy Grewal, and Simi Chahal, giving a sense of nostalgia right at the beginning when we see Sadhu halwai miss holding the wedding in Punjab, and the comic punches which make your burst with laughter. A tractor moving on the streets of Canada to collect ‘Manje Bistre’, meaning beds and beddings, for the wedding is truly a sight.
Manje Bistre 2 is the second franchise of the blockbuster film Manje Bistre which was released in April 2017. Expectations are mounting, and are positive that this sequel is going to make people laugh harder. It is produced by Gippy Grewal, under his home production Humble Motion Pictures. The music of the film will be released by Saga Music. Directed by Baljit Singh Deo, Manje Bistre 2 is going to hit the silver screens on the 12th of April, 2019.