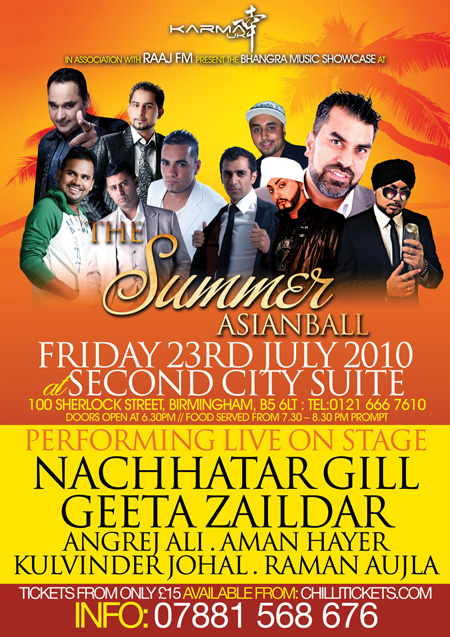 KARMAUK present the first ever Bhangra Music Showcase, Undoubtedly the biggest event of the summer is here, held at Birmingham's most established and prestigious Venue. School is OUT, Exams are OVER and the summer is here so be part of this Unforgettable Event…

ANGREJ ALI – Arguably one of the best performers with full live band in the UK returns for the first time this year to Birminghams finest Dinner Dance venue to perform super hit tracks including "Tharthi Hilde", "Je Naal Nachunga" "Phattey Chak" "Nachdi De" aswell as tracks from his forthcoming album.

AMAN HAYER – The Music director for the night. Aswell as the special guest Dj – Spinning tracks from the forthcoming album "Entourage" featuring the likes of K S MAKHAN, MANGI MAHAL, GIPPY GREWAL and Many more..

BENNY DHALIWAL – The official launch of Benny Dhaliwal – The next BIG thing to hail from the AMAN HAYER camp performing his debut single "Dil De De" featuring G-MONEY for the first time ever – REMEMBER WHERE YOU SAW HIM FIRST-HE GOING TO BE HUGE !

KULVINDER JOHAL – The Official Album Launch Party and the FIRST ever public performance of "The Johal Boliyan" ( Number 1in the Download Chart for ovr 5 weeks). Alongside RAMAN AUJLA – Also performing his smash hit tracks produced by Specialist an Tru-Skool

FOJI – The voice behide the smash hit duet with Miss Pooja performs for the first ever time with a Full Live Band.

INDY SAGU – Internationally acclaimed DJ (Part of the orginal RDB Camp) and from Surinder Shinda's "Bari Kholkay". Fame flies in from Canada for an exclusive set.

Also Available from all usual outlets

THE OFFICIAL SUMMER ASIANBALL AFTERPARTY @ CHI BAR FEATURING LIVE DJ SETS FROM AMAN HAYER & INDY SAGU!
ALL THE ARTISTS FROM THE SUMMER BALL WILL BE INVITED!
ON TILL 6AM