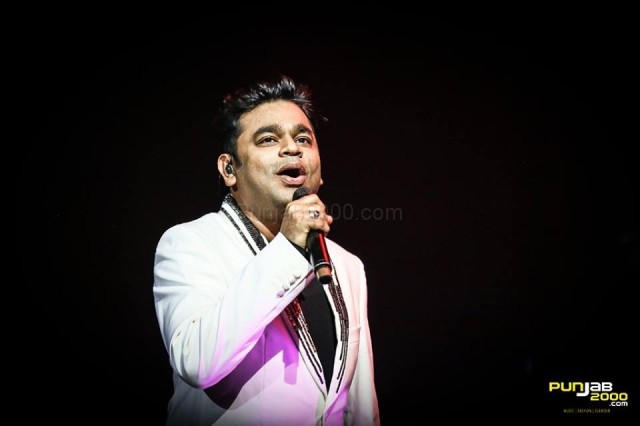 The Must See Live Show of the Year

And for The First Time Ever – Leeds and Manchester

A.R. Rahman is a man that needs no introduction. The multi-talented, internationally renowned composer, musician, singer and record producer is set to bring his spectacular live show to the UK this September. The A.R. Rahman UK Intimate Tour will be a feast for the senses, showcasing his inimitable style and mix of eastern classical music with modern electro, world music and traditional orchestral arrangements.

The A.R. Rahman UK Intimate Tour kicks off at London’s SSE Arena Wembley on 22 September, then heads to Birmingham Barclaycard Arena on the 24th and for the first time ever, A.R. will be performing in Leeds on the 29th and Manchester on the 30th of September.

A.R. commented “After the successful 18-date ‘Intimate’ tour in the US last year, we really wanted to bring it over to the U.K.  The show has all kinds of songs, some are Hindi, some Punjabi – there’s a lot of music to hear!  ‘The Intimate Tour’ is all about music, it’s all about intimacy and seeing you face to face, and I look forward to seeing you all very soon.”

One of the world’s most prolific and respected composers and musicians, Rahman has enjoyed an extraordinary career since the 90s and was already a massive and highly sought after talent in his native India. The enormous success of his first Hindi venture was followed by the chart-topping soundtrack albums of films such as Bombay (1995), Dil Se (1998), Taal (1999), Zubeidaa (2001) and the Oscar nominated film Lagaan – Once Upon A Time In India (2001).

His rise to international prominence came when he captured the world’s spotlight with his work on the film score for Danny Boyle’s Slumdog Millionaire. The rapturous score and accompanying title track earned him a Golden Globe, two Academy Awards and two GRAMMY’s. Other notable film soundtracks include; Pele – Birth of a Legend, Million Dollar Arm, 127 Hours and The Hundred Foot Journey. 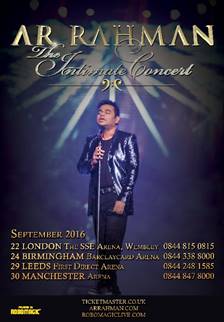 As a touring musician, composer and performer, Rahman has long been filling arenas with his elaborate and stunning live performances.  He has collaborated with everyone from Mick Jagger and Will.I.Am to Andrew Lloyd Webber, Shekhar Kapur and Baz Luhrmann, as well as many of the world’s most respected orchestras. Rahman remains one of the few mainstream artistes, whose works have been classically interpreted by the likes of the London Philharmonic Orchestra, Los Angeles Philharmonic Orchestra, Babelsberg Film Orchestra and the Birmingham Symphony Orchestra.

In Summer 2012, Rahman composed a Punjabi song for the London Olympics opening ceremony as part of a medley showcasing Indian influence in the UK.

Rahman has sold-out international arenas around the globe including the prestigious Hollywood Bowl and has played for crowds as large as 120,000 in his home country of India. This summer, UK audiences will have the rare opportunity to experience an incredible must-see concert by a musician revered as one of the true greats of our time.

Watch a special message from AR to his UK fans:https://www.facebook.com/RobomagicLive

A variety of exclusive packages including Meet & Greets and front row seats are available here: from Ticketmaster.co.uk and Robomagiclive.com