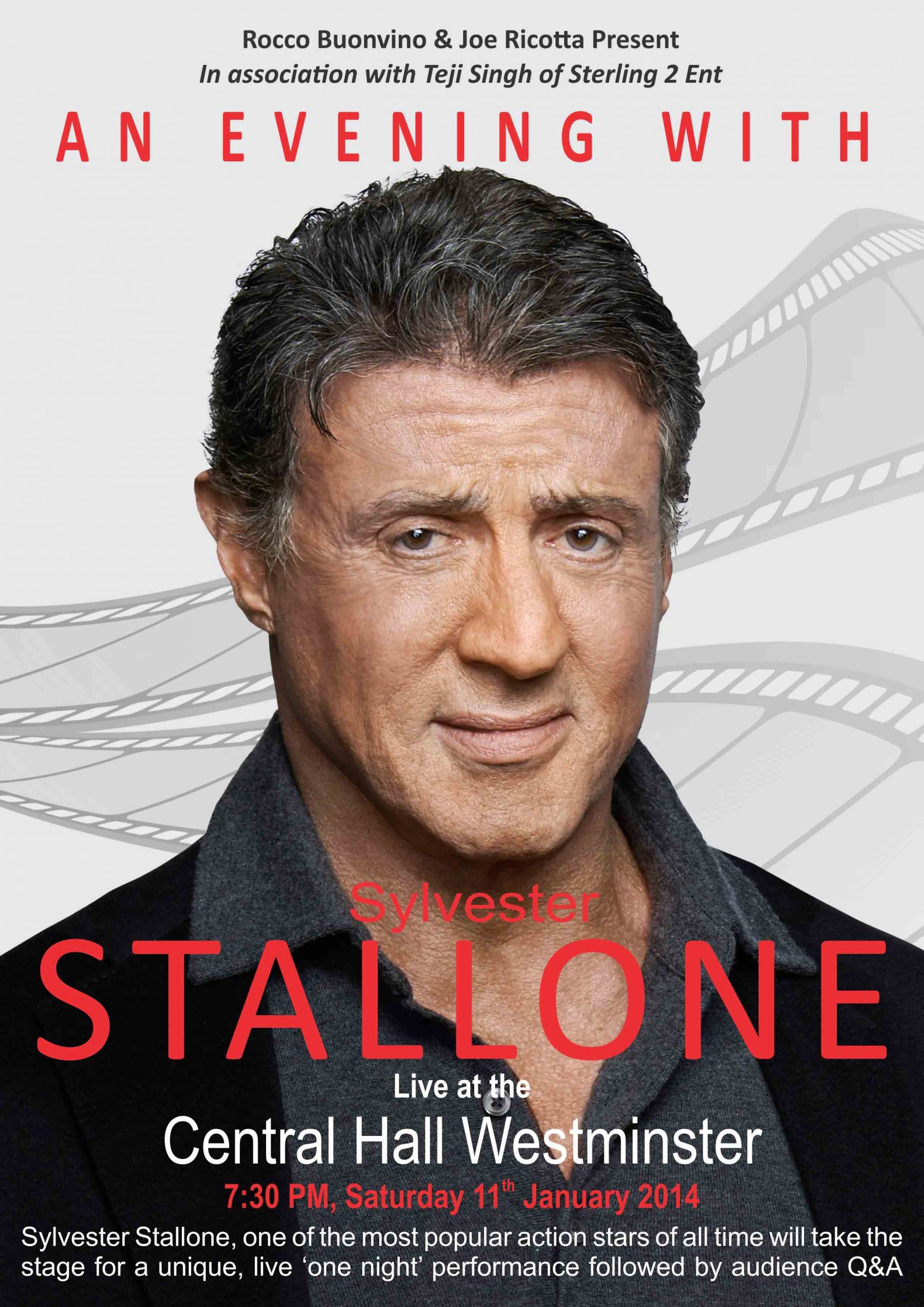 AN EVENING WITH SYLVESTER STALLONE IN LONDON ANNOUNCED 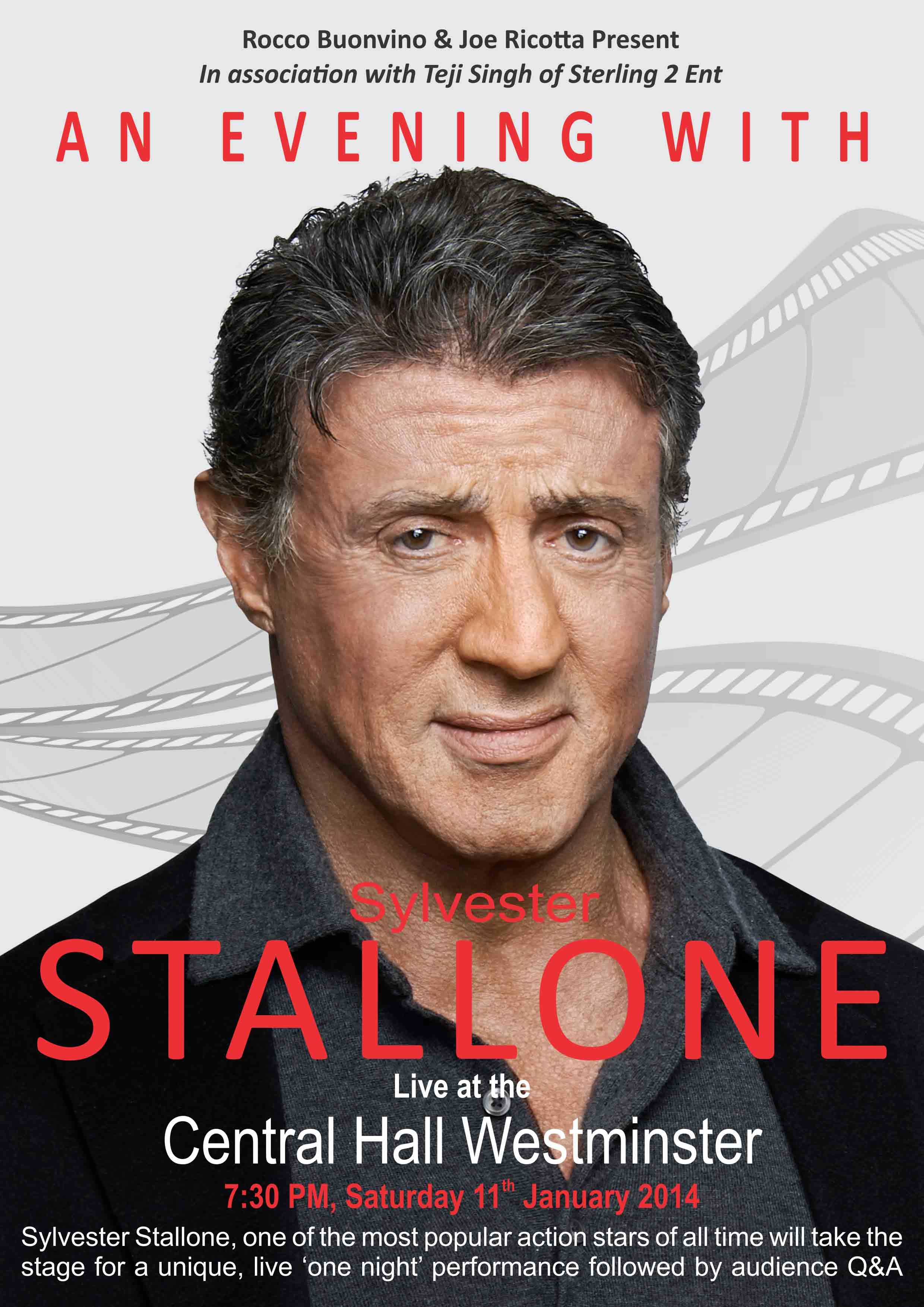 AN EVENING WITH SYLVESTER STALLONE IN LONDON ANNOUNCED

Hollywood’s much-loved action hero Sylvester Stallone is set to enthral, enlighten and entertain the UK at a unique ‘An Evening With’ event at London’s iconic Central Hall, Westminster on Saturday, 11th January 2014. This un-missable event is an once-in-a-lifetime opportunity to see one of the world’s biggest stars in the grandiose setting of Central Hall, Westminster. The event is presented by leading entertainment impresario and event organiser Rocco Buonvino and entrepreneur Joe Ricotta, in association with film producer and founder of entertainment company Sterling 2 Ent Teji Singh.

Sylvester Stallone, who is famed for his roles in such cult classics as Rocky, Rambo, Demolition Man and The Expendables, will treat the audience to an intimate evening of anecdotes about his illustrious career, private insights from his life as one of the world’s most admired screen idols as well as partaking in a special question and answer session with audience members.

Rocco Buonvino in association with Sterling 2 Ent recently presented the sell-out event An Evening with Al Pacino. Rocco Buonvino is an internationally-renowned events and promotions supremo who has been at the forefront of staging some of the biggest world-wide entertainment events. He has worked with global superstars such  Robin Gibb, Cliff Richard, Rod Stewart, Beverley Knight, Susan Black and now Sylvester Stallone. Speaking about bringing Stallone to London, Rocco Buonvino says: “I’ve had the pleasure to work with many major artists around the world, many of whom are dear friends. None come bigger than Sylvester Stallone, a true heavyweight of the silver screen, who is responsible for some of the world’s most iconic, cult film hits of our time.’

Teji Singh, Founder of Sterling 2 Ent says: “We are delighted to be part of this event. Sylvester Stallone is a global icon and seeing him in London is going to be very much a once in a lifetime opportunity.’

Sylvester Stallone rose to worldwide recognition as an actor, writer and director since he played the title role in his own screenplay of Rocky, which won the Academy Award for Best Picture and was nominated for a staggering 10 Oscars. Rocky grew to a franchise of five sequels and in 2006 Stallone concluded the series with Rocky Balboa, a critical and audience success which resolutely confirmed both Stallone and Rocky as iconic cultural symbols. In more recent times, Stallone wrote, directed and starred in Rambo, which continued the saga of Vietnam vet John Rambo 25 years after the debut of Rambo: First Blood.

Stallone then released his most ambitious project, the action thriller The Expendables, which he wrote, directed and starred in, and for which he hired an all star action cast including Jason Statham, Mickey Rourke, Jet Li, Eric Roberts, Dolph Lungren and Steve Austin – as well as Bruce Willis and Arnold Schwarzenegger. It opened to Number One at the Box Office – making Stallone the only actor in Hollywood history to open a Number One film across five decades.

The star’s other prominent accolades include being honoured by the Video Dealers Software Association when he was presented with the “Action Star of the Millennium Award” at the Organisation’s 21st Annual Convention. In 2008 The Zurich Film Festival presented him with the Festival’s Inaugural Golden Icon Award, which recognized his achievements as a great American Actor and Filmmaker and in 2009, The Venice Film Festival honored Stallone with their Glory to the Filmmaker Award.

For the release of The Expendables Stallone was honoured at the Spike TV’s Guy’s Choice Awards with the coveted GuyCon Award, presented by Governor Arnold Schwarzenegger. At the 2010 Comicon Convention, he was the first inductee into the IGN Action Hero Hall of Fame.

Seen as one of Hollywood’s most iconic stars, Sylvester Stallone will be seen at Christmas 2013 starring in Grudge Match with Robert DeNiro. In March, 2014, Rocky the Musical will open at The Winter Garden on Broadway. The musical is based on the original film written by Sylvester Stallone with music by Stephen Flaherty and Lyrics by Lynn Ahrens.

‘An Evening with Stallone’ is undoubtedly an exceptional occasion to catch an icon in the flesh. Tickets start from £45 (plus booking fee) and can be purchased from www.seatlive.com