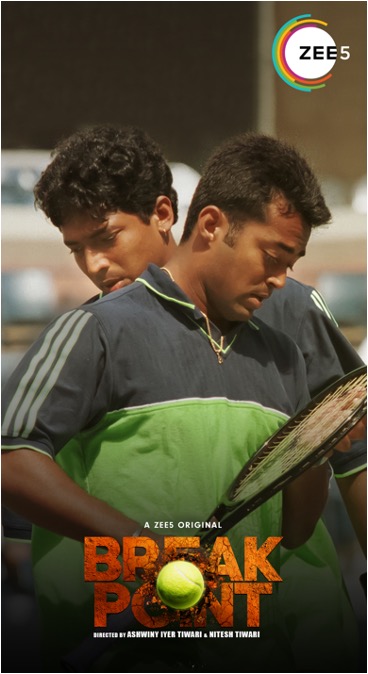 The bromance to break-up story of tennis legends, Leander Paes and

ZEE5 Global, the world’s largest streaming platform for South Asian content brings audiences the intriguing and untold story of Lee-Hesh in BREAK POINT, a 7-part series which will not only construct their epic tennis matches but also deconstruct their relationship, both on and off the court. Apart from their accomplishments on the tennis court, the charismatic duo is known for their off-court lives, and their public split which broke the heart of the nation. All this will now be brought to life by celebrated filmmakers Ashwiny Iyer Tiwari and Nitesh Tiwari of Dangal, Chhichhore, Bareilly Ki Barfi and Panga fame in ZEE5’s Original series BREAK POINT.

While the posters generated massive intrigue and curiosity, the trailer of the highly anticipated series is finally out and is guaranteed to stir up conversation. This is the first time that the tennis icons are getting candid and honest about their split and putting speculations to rest by each narrating their side of the story. The trailer also features tennis icons Sania Mirza, Bob Bryan, Mike Bryan among other family and friends and goes on to show Lee-Hesh’s iconic partnership which put Indian tennis on the world map and also led to them being the most feared doubles pair during the late 1990’s.

Says Nimisha Pandey, Head, Hindi Originals, ZEE5, “We are extremely delighted to unveil the first look of Breakpoint. It is a human story of a partnership, a friendship and a rivalry that impacted the careers and lives of two of India’s most prolific players. Through this 7-part series the viewer will experience the beauty of the game and true sportsmanship but will also see the vulnerability of success. What makes our stories relatable for varied consumer cohorts are their authenticity and relevance. At ZEE5, we not only understand the varied visions of our creators but are also immersed in the kaleidoscope of worlds that make up our viewers’ realities. With the industry’s most prolific storytellers Ashwiny Iyer Tiwari and Nitesh Tiwari telling this complex and immensely engaging story, we hope to win our viewers’ hearts with Break Point”.

Speaking about the offering, Archana Anand, Chief Business Officer, ZEE5 Global said, “We are proud to be narrating this very special untold story of India’s tennis legends to our audiences across the globe. BREAK POINT captures the riveting story of these two inspiring sportsmen and gives audiences a ring-side view into their emotional relationship, their legendary wins on-court and heart breaking split off-court. This 7 part series is one for the ages, and will have audiences experience Lee-Hesh’s journey like never before”.

Say filmmakers Ashwiny Iyer Tiwari and Nitesh Tiwari, who will be co-directing a project for the very first time, “We have always been more intrigued by the humans behind the icons and that’s what we’ve tried to capture in BREAK POINT. Both Leander and Mahesh are massive sports champions but, in this series, they are two friends opening their heart and showing an emotion to the world. We feel honored to get the chance to tell their untold story which will also give the Do’s and Don’ts of great partnerships to the aspiring youth of our country. We are elated to partner with ZEE5 for this one”.

Leander Paes says, “It feels surreal to see myself on screen, laying my life out there for the world to see. But I realize that a lot has been said and speculated and there’s no better way to put it to rest than by addressing it head on. So, I am happy that we are getting a chance to tell our story firsthand and hope that the audience continue to admire our on-court partnership and respect our reasons to break-up”.

Mahesh Bhupathi adds, “All partnerships go through turbulence and highs and lows and so did ours. While the world knows about our on-court partnership, this is the first time that they will get to know about our off-court lives and relationship. However, that should not take away our victories and achievements as despite our differences, Lee-Hesh made history and we are proud of that”.

BREAK POINT marks ZEE5’s first partnership with filmmakers, Ashwiny Iyer Tiwari and Nitesh Tiwari under their banner, Earthsky Production. The 7-part series will premiere on ZEE5 on 1st October and will be available in English, Hindi, Tamil and Telugu.