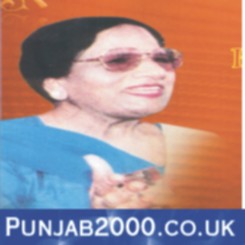 Surinder Kaur The Nightingale of Panjab R I P

Some of her most famous song's which have been covered are:

Since the 1940s, Surinder Kaur has rendered classical and folk tunes that have been admired by generations. The fountainhead of a whole new style of singing, she has earned deep respect from present-day singers and the public alike.

From a humble beginning to high-profile international honours and awards, this nightingale of Panjab has come a long way over the decades. Her depth and intensity, the poise of her stage performances still hold audiences spellbound.

The nightingale of Panjab, Surinder Kaur, who even the great Nusrat Fateh Ali Khan, dubbed the pioneer in popularising Panjabi folk music, has finally decided to settle down at Zirakpur, near Chandigarh.

“Though this is not the Panjab that I can call home, but I have decided to spend the last years of my life here,” she says, as she sits at her rented home in Panchkula, looking over the layout of her house, under construction at Zirakpur in Panjab.

She ruled the Panjabi music scene for almost three decades and every singer worth his voice wanted to cut an album with her. She has been the music company, HMV’s leading star for years and has rendered her voice for duets, Folk songs, Bhajan Shabad Kirtan, and Sufi Kalam.

It is not without reason that when she went for a performance to Pakistan, the then Pakistani premier, Mr Nawaz Sharief, called her at his residence for a performance, and the media in Pakistan made endearing references to her in their headlines like “Surinder Kaur peke aayi.”

Guru Nanak Dev University conferred on her a doctorate in the year 2002 though she has hardly had a formal education, other than in music.

Says Surinder Kaur, “ Most of my life has been spent in Delhi. Born and brought up in Panjab, the part that is now on the other side of the border, I never thought of moving out of Delhi. But now, the pangs of being separated from my ‘mitti’ began pulling me and I decided to build my house in Panjab, and spend the evening of my life here.”

She recalls how over the years, the political bigwigs in Panjab had made several public announcements regarding allotting her land in Panjab so that this doyen of Panjabi folk music could build a house here.

“A former Chief Minister, the late Mr Beant Singh, had announced that the Panjab Government would allocate me land in Panjab for my contribution to Panjabi folk tradition. Later, the then Chief Minister, Mr Parkash Singh Badal, while conferring on me the title of ‘Singer of the Millennium’, too had announced that a house be built for me. But I walked up on the stage and announced that I was averse to such political announcements, and will come here on my own, using my own resources.”

But it is disheartening that this foremost Panjabi folk performer’s work has not featured in any coherent reissue programmes, and she is under-represented. “I still do my ‘riyaaz’ daily, but now I also indulge in the i’baadat’ of the Almighty. But yes, I no longer hold concerts in India.
Now people regard singers as ‘tamaashbeen’.

“There was a time that the singer would sit and perform, and would sway the crowds to get up and dance. Now the singer is expected to perform, while the audience sits back and gawk at them. I come from an era where the voice was important, how can I perform today, when the musical beats and body language are used to captivate the audiences’ attention,” she says.

Talking of her long journey, from a small girl in Lahore to international acclaim, by reviving the Panjabi folk tradition, Surinder Kaur recalls how her melodious voice captured her brothers’ attention while she was 12 years old. “Even though my parents, who were devout Sikhs, were initially reluctant, they sent me to learn music from Master Inayat Hussain, a nephew of Bade Ghulam Ali Sahib.
My elder sister, Prakash Kaur, was married by then, but her husband, too, encouraged her to learn the finer points of music. I still remember the day, August 31, 1943, when my first programme was aired on All India Radio, Lahore, and was widely appreciated. 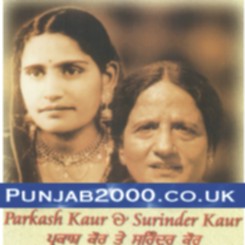 “After partition, we moved to Ghaziabad, and I got married to Prof Joginder Singh Sodhi. And unlike most men, my husband, recognised my talent, and became my support system, when I started a parallel career as a playback singer, or when I went globe-trotting on numerous trips to Russia, Canada, France or anywhere else. He encouraged me to reach the zenith of my career, while he pursued his academic career, and took care of our three daughters. He groomed me completely,” she says.

The lady with the golden voice says that the reason for her enormous success is that she never gave up learning. ”A life well lived is when it has been a continuous learning process. The folk songs that I sang were learnt from my mother or other relatives, especially during weddings. But a lot of tunes and songs I picked up from unknown people, as they sat humming these tunes. I remember the time when I was called for a performance at a wedding in the royal family of Patiala. At the venue, I heard a group of ‘marasins’ singing some songs. Even as my name was announced for my performance, I did not realise as I was so engrossed in listening to these women. It was later that I picked this up and came with my famous number, “ Jeeve Dhola Ni Mera Jeeve Dhola – A Banna.”

She says that she is happy that her daughter, Dolly Guleria, is carrying the family tradition forward, and grand-daughter, Sunaini, too is following their footsteps. The three of them, had, in fact, cut a Panjabi album together in 1995 called “Surinder Kaur- The Three Generations”. 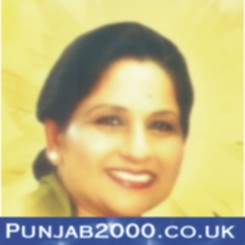