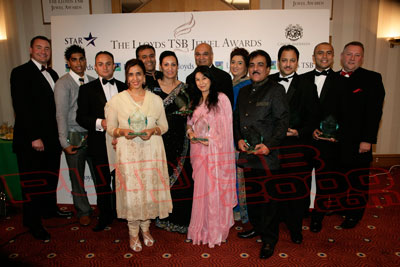 Now in its sixth year, the Lloyds TSB Jewel Awards marks one of the most esteemed entries on the UK Asian business calendar, whereby the most significant Asian achievements and contributions to the UK economy and wider community are commended against a backdrop of refined entertainment and a gala dinner attended by dignitaries, MPs and high profile personalities.

STAR TV is immensely proud to contribute to the prolific event, by being the exclusive media partner for the event and televising it across UK and Europe. The partnership with the Lloyds TSB Jewel Awards reaffirms STAR TV’s fundamental principle of broadcasting the widest possible spectrum of programming across entertainment, community and current affairs, as well as the highest level of news and sports reporting. The commitment to telecast the awards ceremony also reflects the channel’s continued commitment to celebrating the achievements and successes of the Asian community, and also reflects the diverse nature in tastes and expectancy of its audiences.

The events are regionalised to comprise three separate award ceremonies celebrating the continued achievements of British Asians across the public and private sectors in the North, Midlands and South of the UK. The Lloyds TSB Central Jewel Awards took place on 21st June 2008 at the NEC Hilton, Birmingham.

and a new award for the Future Leaders, as well as the prestigious Lifetime Achievement Jewel Award.
The awards ceremony and accompanying evening of first class entertainment and jubilations will be brought exclusively by STAR TV to viewers at home.

In relation to STAR’s synergy with the Lloyds TSB Central Jewel Awards, Patrick Corr, Vice President, STAR, Europe comments, “STAR is delighted to partner with such a prolific event on the Asian business calendar. It is our aim to get involved in events that allow us to put into practice, our ethos of informing, as well as entertaining. We are committed to promoting key activities and events that span a wide spectrum of community affairs and interests”.

Lloyds TSB Central Jewel Awards will be broadcast on STAR Plus on Saturday 12th July 2008 at 7.00pm