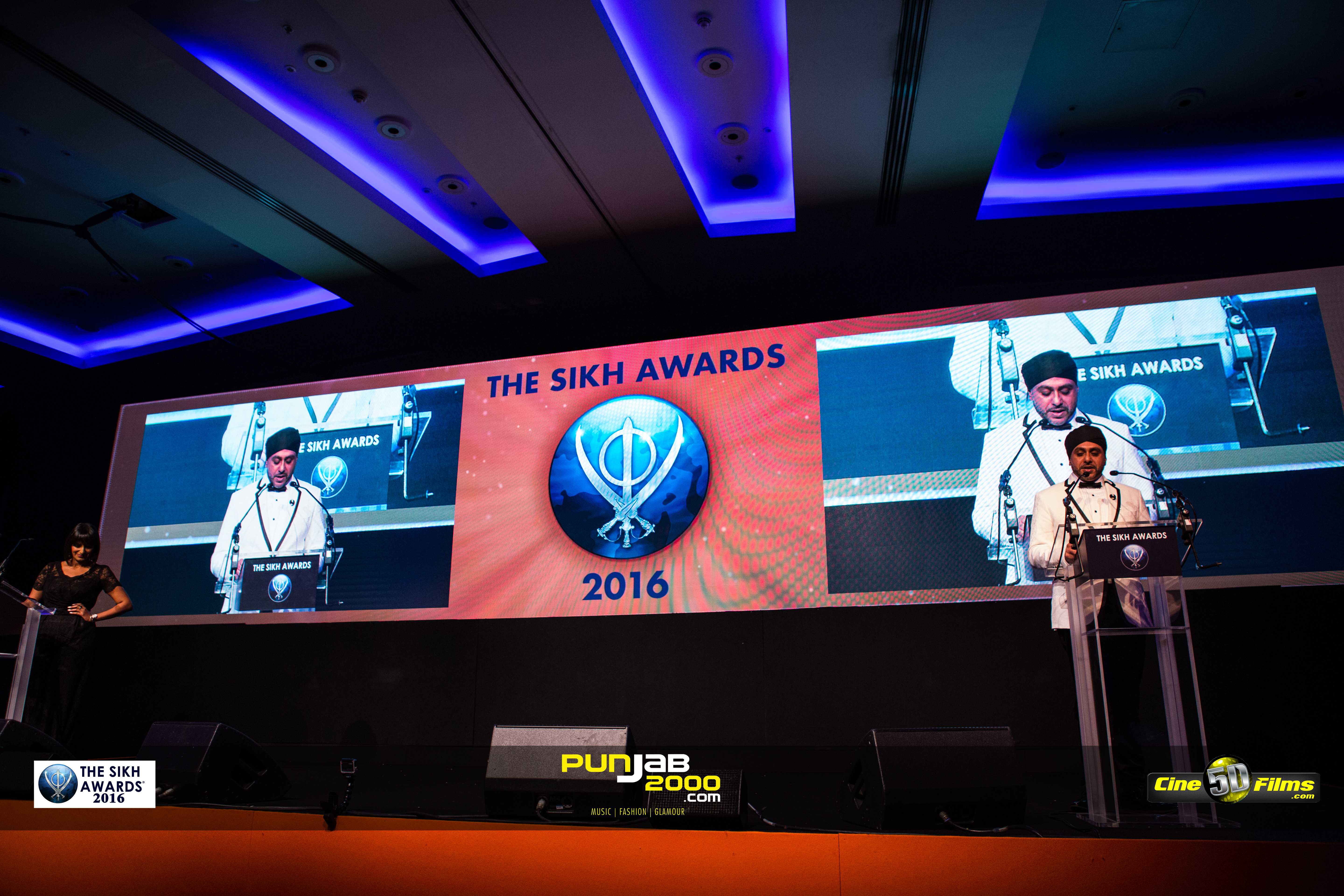 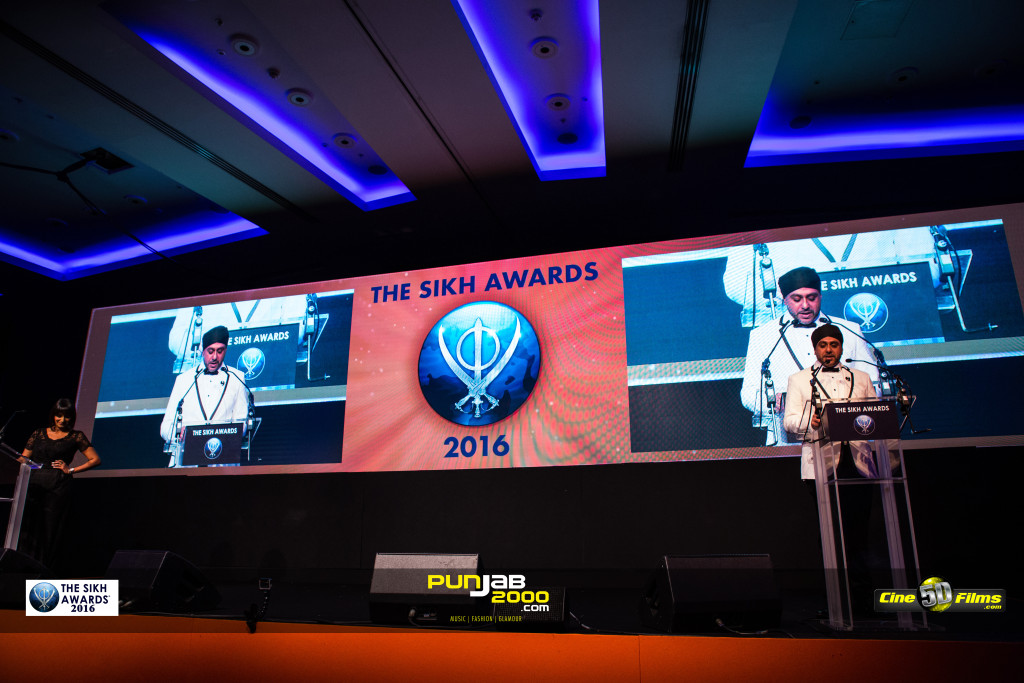 The Punjab2000 team were in full force covering the  7th annual The Sikh Awards 2016 which returned to the UK  at Park  Plaza  Hotel,  Westminster  Bridge,  to honour an  array  of  deserving winners  from the international Sikh community.

Hosted  by Ranvir  Singh,  a  journalist  and  broadcaster,  best  known  for  her  presenting role  on the  ITV  Breakfast  programme  ‘Good  Morning  Britain’,  The  Sikh  Awards  recognises  the  pivotal contributions  made  by  the  Sikh  community  across  a  variety  of  fields,  from  business,  charity, education, entertainment, professional services, seva (selflessservice), and sport, with winners selected  across  the  globe  from  Asia,  USA,  Canada,  Australia,  Europe,  Africa  and  the  Middle East. 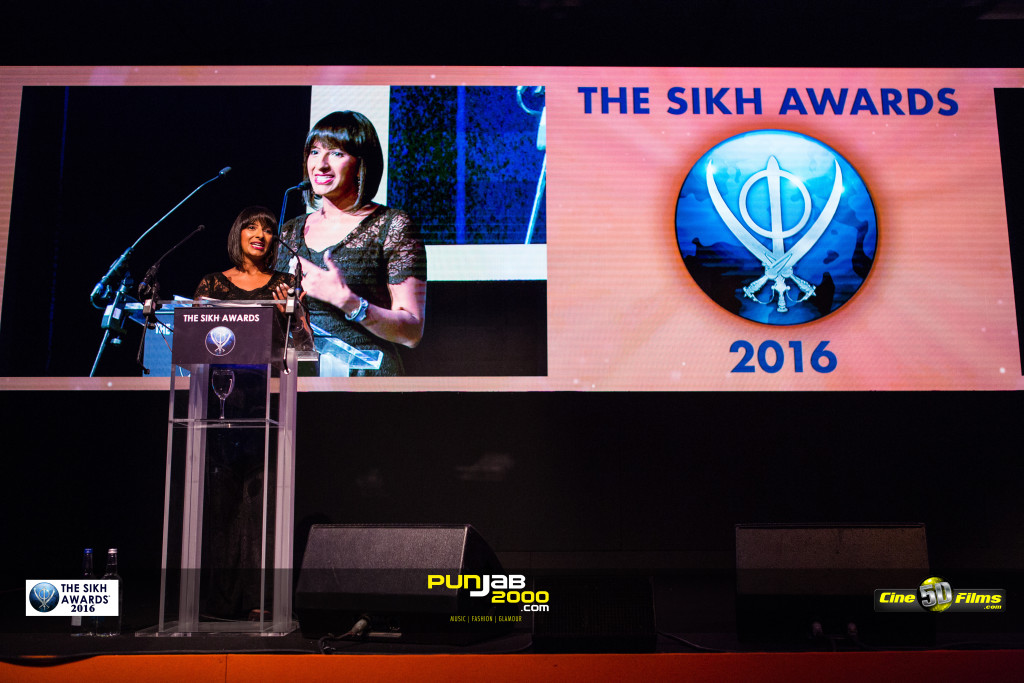 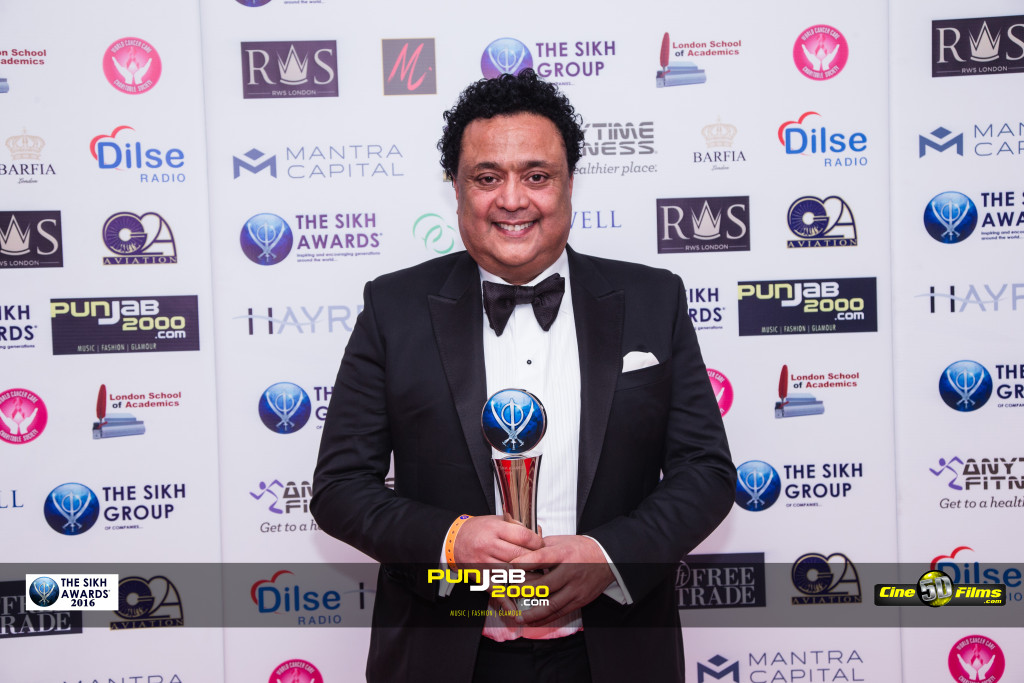 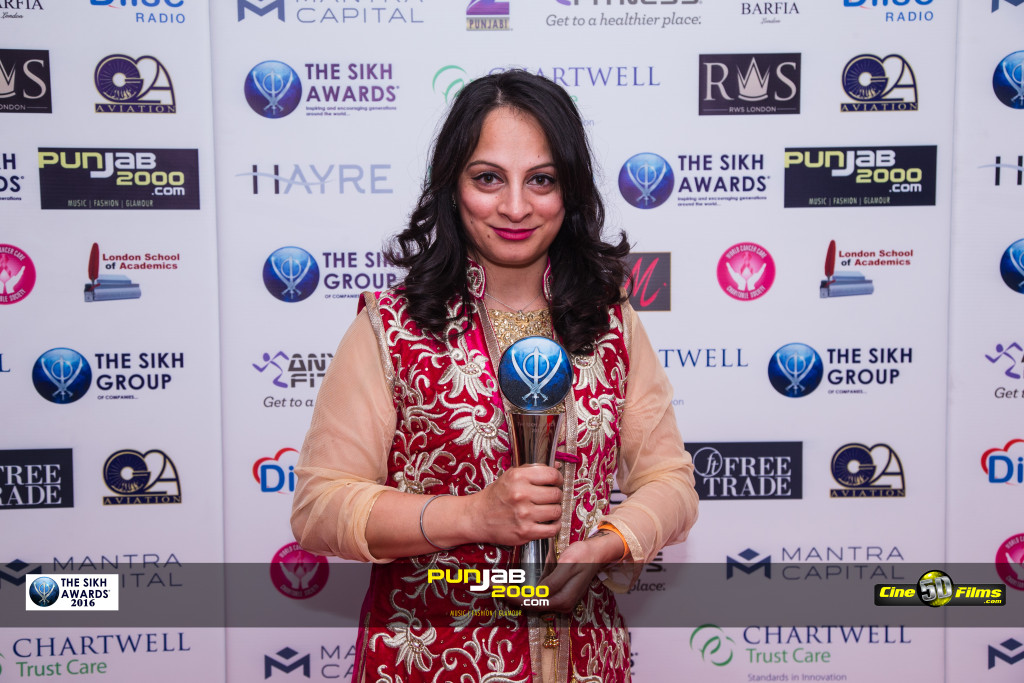 Mrs    Kiran    Singh    (UK) , life    coach    at Design    the    Lifestyle    You    Desire, an author and residential and hospitality interior designer at Studio Kiran Singh, founder and chief editor of Vivacious Mum, My Unique Home and Passion for Food 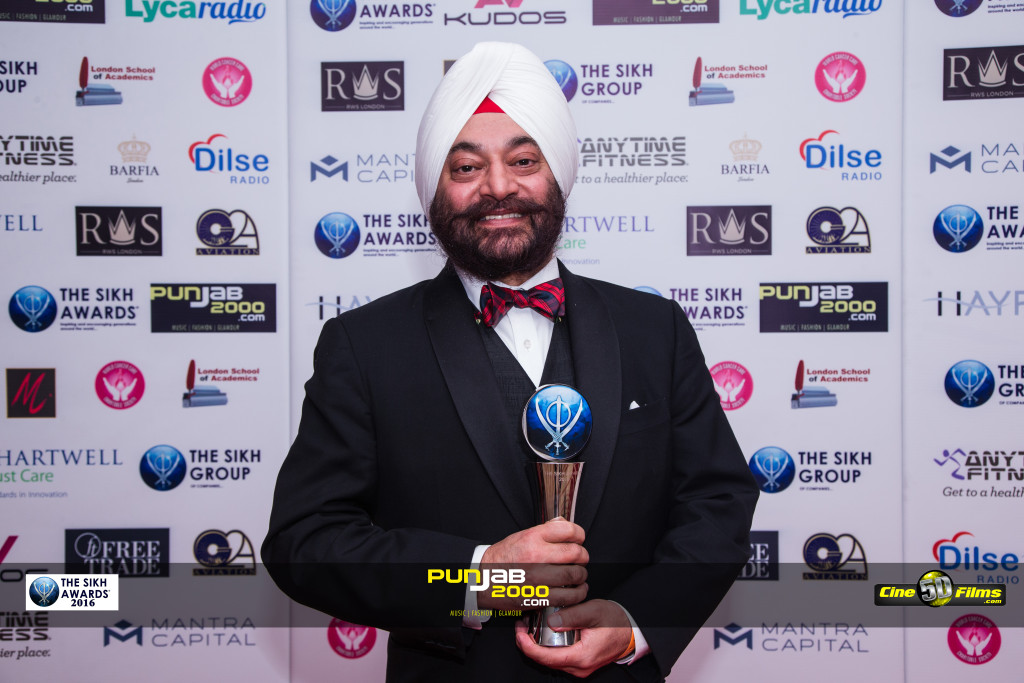 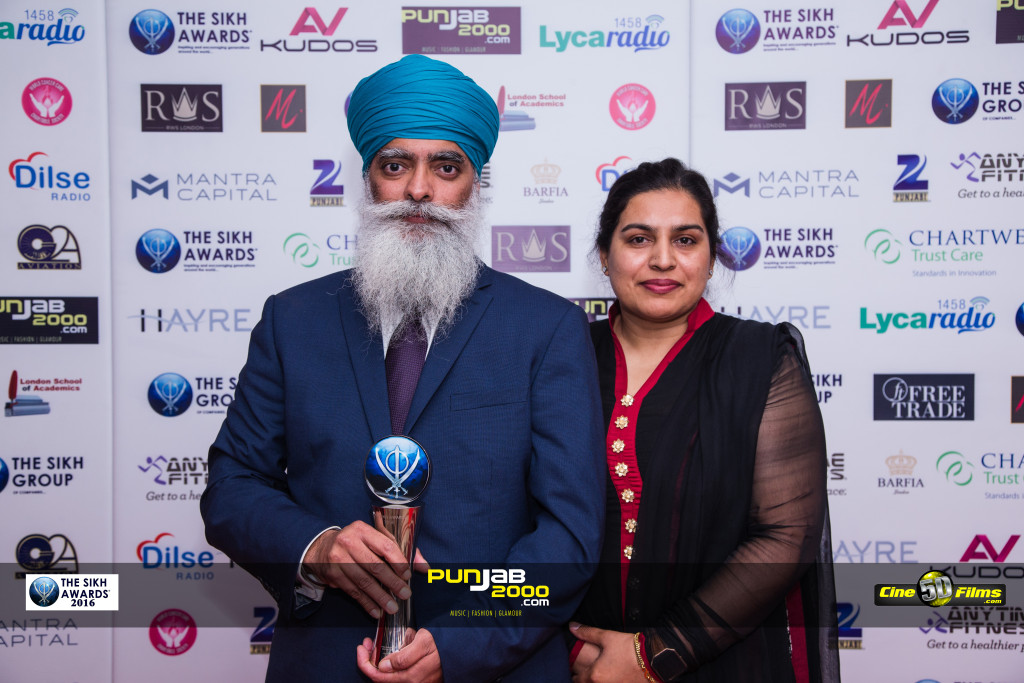 Ravi Singh of Khalsa Aid (UK) , a global charitable organisation with a vision to spread the message of humanity as taught by the Sikh Gurus–Sikh in Charity 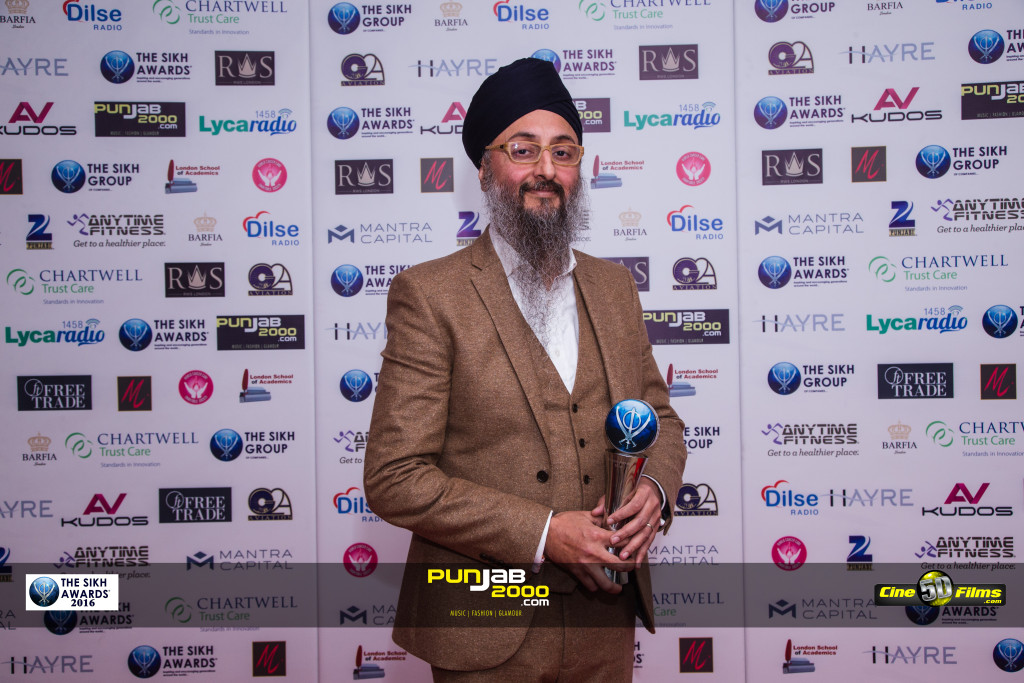 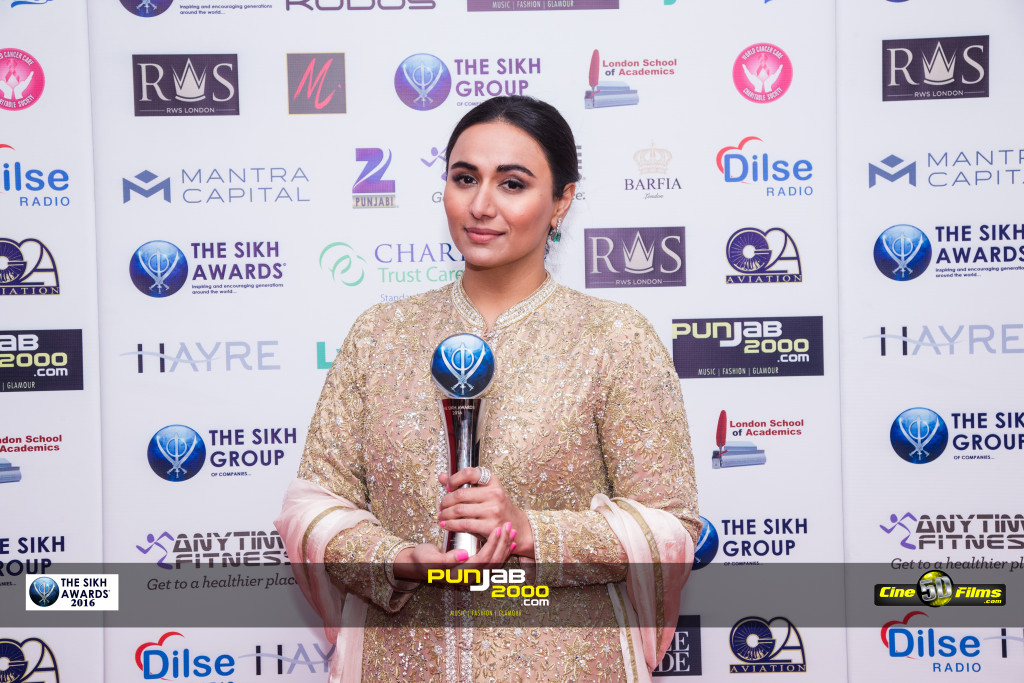 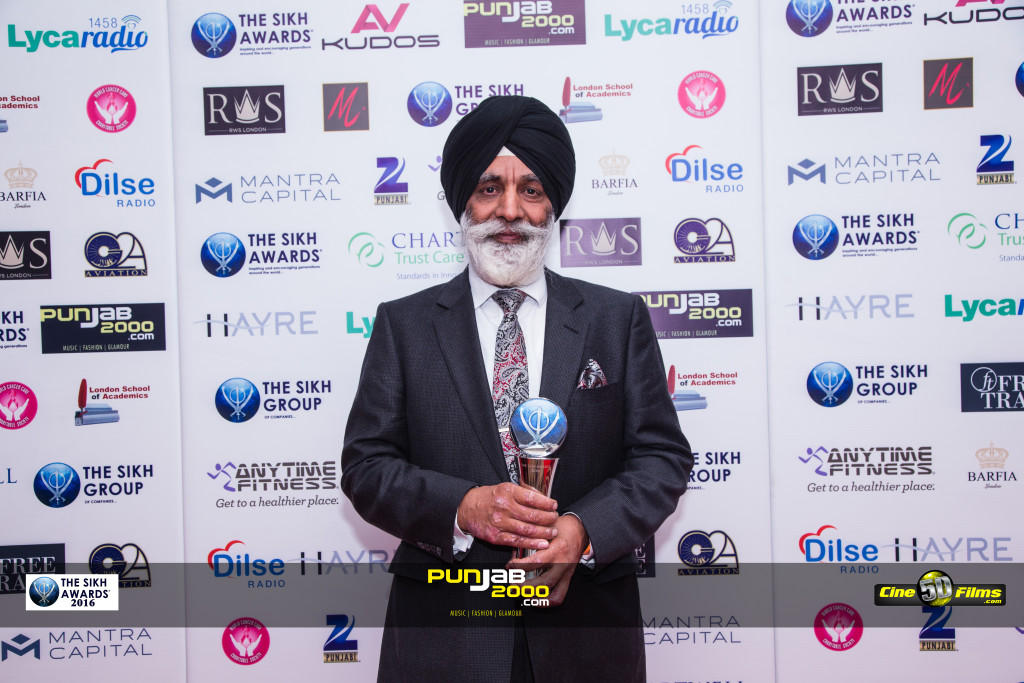 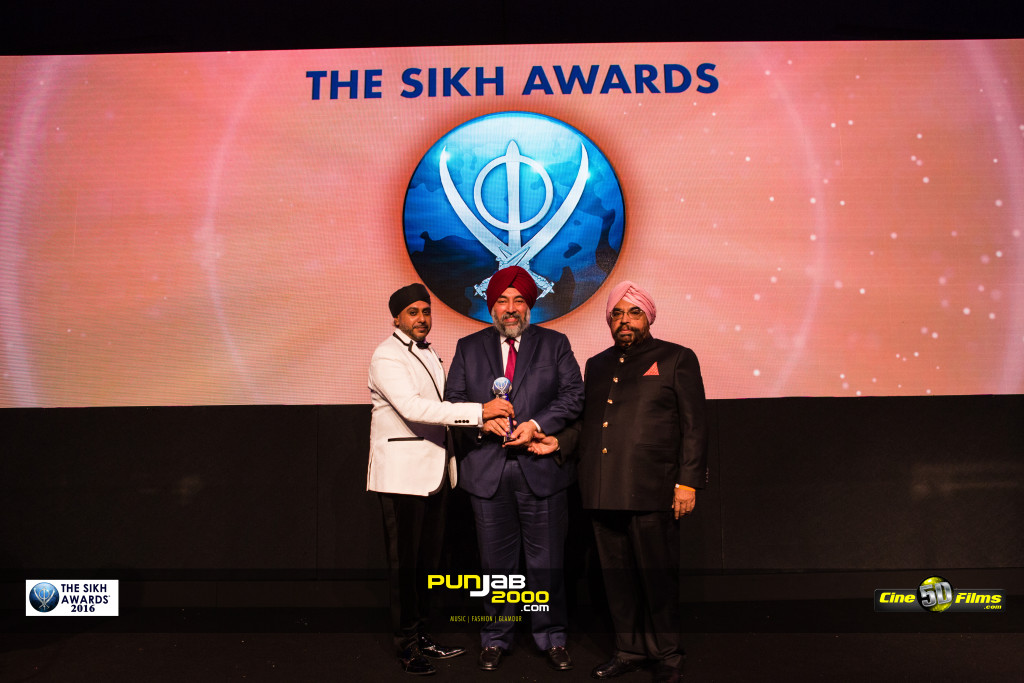 Mr  Jaspal  Singh  Bindra  (India), a  global  financial  services  industry executive  with  a consistent track record of driving profitable growth and increasing brand and shareholder value in a broad range of leadership roles with major banking groups such as Standard Chartered  Bank,  UBS  and  Bank  of  America.  He  has  successfully  led  businesses  with revenues ranging from $1-13 billion 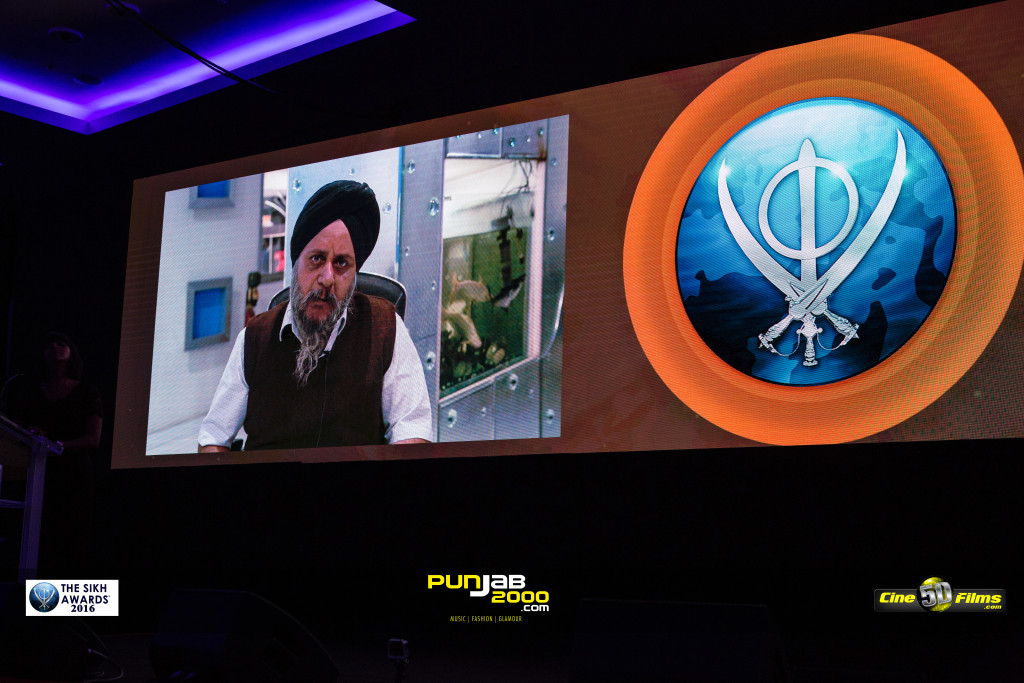 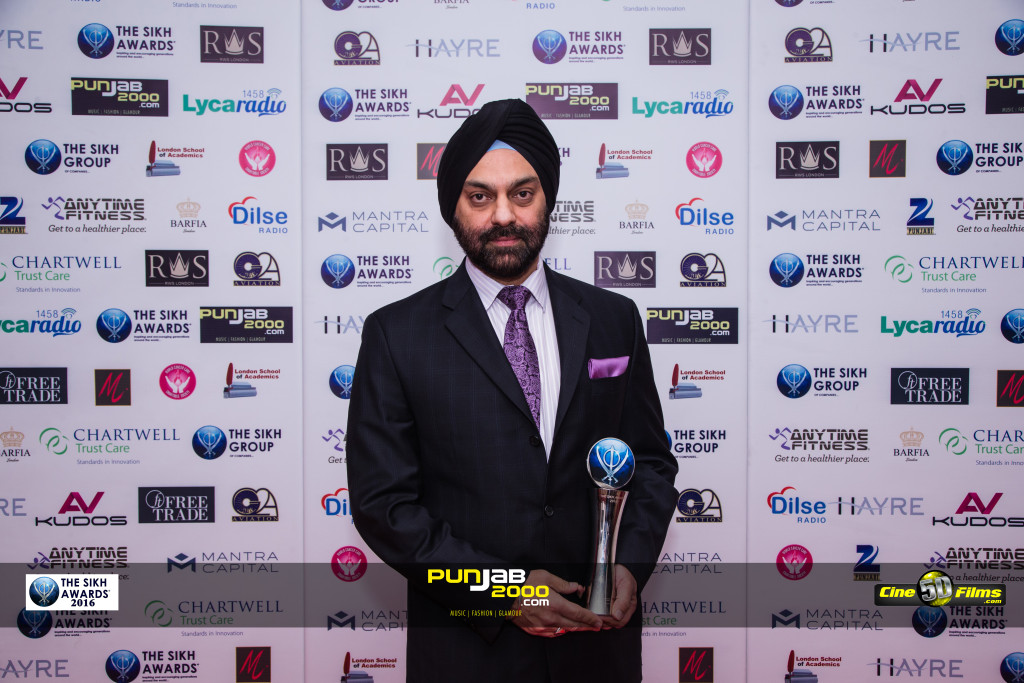 Mr Ram Singh Nayyar (Canada), the first turbaned Sikh to have led a Canadian team to the Olympic games 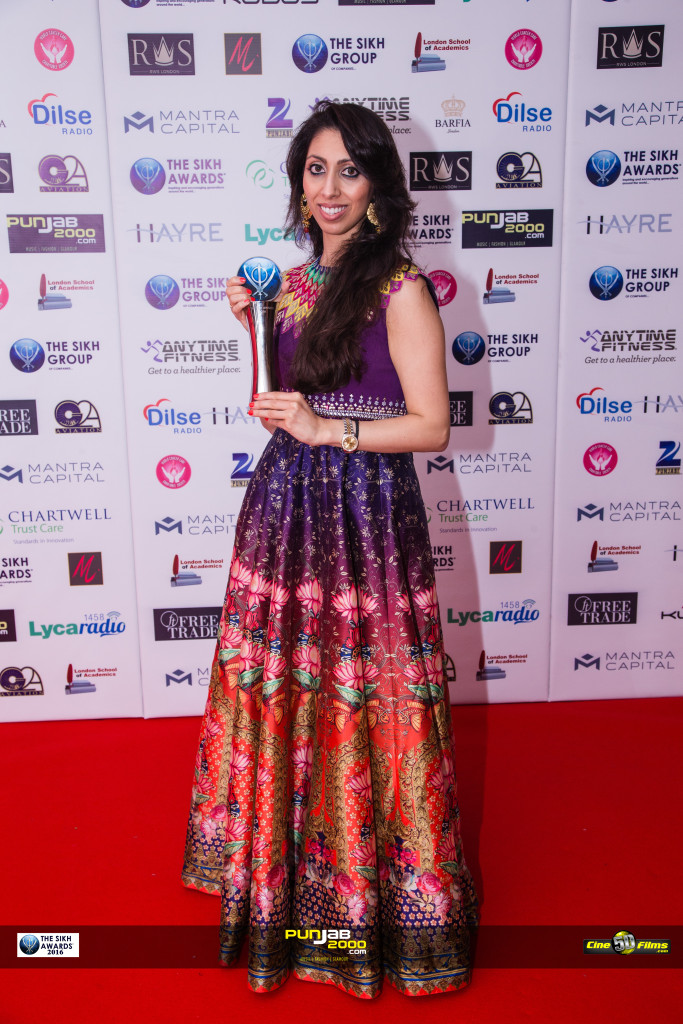 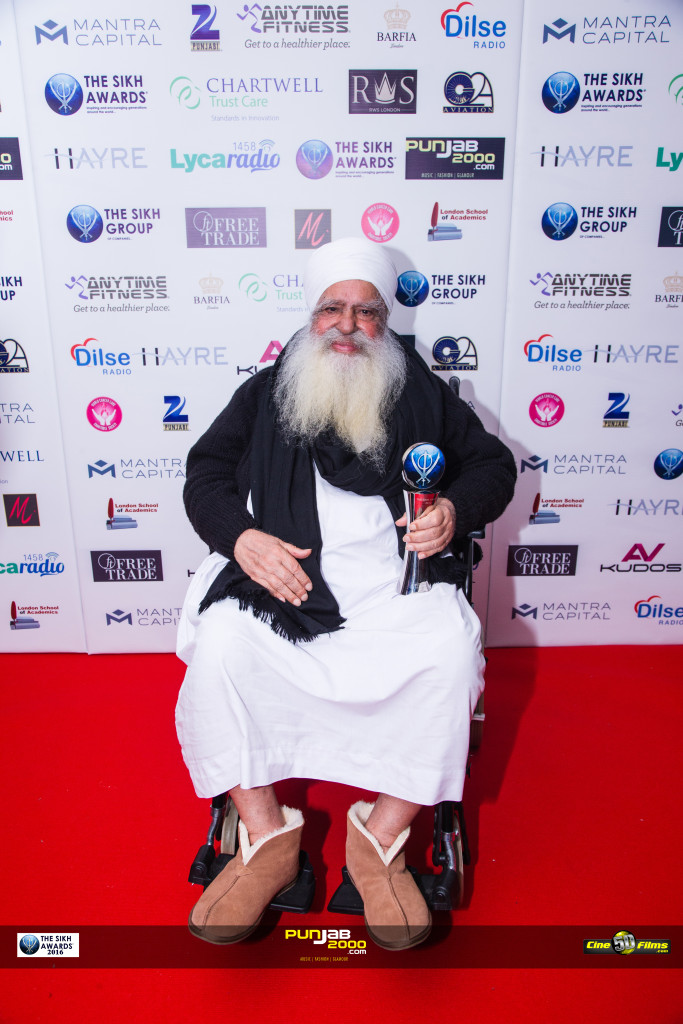 Sant  Baba  Iqbal  Singh  Ji  (India), shifted  to the  Agriculture  Department  in  Himachal Pradesh from Punjab and worked relentlessly to achieve the vision of Sant Attar Singh ji Mastuanewale,  of  providing  value-based  education  to  rural  youth.  Baba  Ji  retired  as Director of Agriculture, HP and started the first school at Baru Sahib with only 5 kids in 1986.  Today  he  leads  a  chain  of  129  schools,  2  universities  benefiting  60,000  rural students  across  6450  villages.  He  is  Chancellor  of  two  universities  and  President  of Kalgidhar Trust and Society.

This highly respected honour is bestowed to a Sikh or non-Sikh that through their passion, dedication and commitment have made a significant contribution for the greater good of society.

The prestigious event saw 750 guests in attendance from elite international dignitaries to public figures,  community  heroes,  sports  stars  and  celebrities such  as  the  iconic  music  group Sister Sledge. Each year, The Sikh Awards takes a theme as the central focus for the evening’s celebrations. The  seventh  annual  event  recognized  and Honoured  two  major  events:  the 547th Birth Anniversary of Guru Nanak Dev Ji, who was born in 1469 in Rai Bhoi Di Talwandi, now called Nankana Sahibin Pakistan. As a child Guru Nanak Dev Ji was extraordinary in many ways; he had  a  contemplative  mind  and  rational  thinking.  He  amazed  his  teachers  with  his  sublime knowledge  and  by  the  age  of  13  he  had  mastered  Hindi,Sanskrit  and  Persian.  Not  until  1522 did Guru Nanak Dev Ji settle down at Kartarpur, which was where he spent the rest of his life. Guru Nanak Dev Ji had laid down the foundations of Sikhism and ascended to heavenly abode on 22nd September 1539.

The event also looked ahead of the 350th birth anniversary of Guru Gobind Singh Ji which takes place on 5th January 2017. The ancient venerated city of Patna, Bihar, is poised to host a  magnificent  celebration  centered  on  Takhat  Sri  Harimandir  Ji,  Patna  Sahib,  one  of  the  five seats  of  spiritual  and  temporal  authority  of  Sikhism.  It  is envisaged that  over  one  million  Sikh and  other  pilgrims  will  visit  Patna  over  a  two-month  period  from 1st  December  2016  to  31st January  2017 for  the  celebrations.  The  paramount  purpose  of  celebrating  Guru  Gobind  Singh Ji’s  350th birth  anniversary is  to  pay  loving  tribute  to  the  Saint-Soldier  Guru,  who  not  only created the Khalsa fraternity, but also blessed Sikhs with the highest exalted spiritual authority –Sri Guru Granth Sahib Ji. Another  highlight  of  the  event,  which  was  hosted  by  the  media  organization The  Sikh Directory, was the launch of the fifth edition of The Sikh 100 Power List, detailing the world’s most prominent Sikhs in the global community.

The  Sikh Awards,  was  founded  by  the  successful  entrepreneur, Navdeep  Singh. Speaking about the event, Navdeep Singh said: “The Sikh Awards is now in its seventh glorious year. Our purpose with the awards is to recognize, Honour and celebrate the enormous achievements of the Sikh community who continue to contribute immensely to the social, cultural, and economic fabric of societies globally, as well as making a difference to people’s lives through philanthropy. I would also like to congratulate all of this year’s winners. May they continue to be a beacon that shines  out  to  future  generations,  who  will  continue  to  strive  for  excellence  in  their  chosen professions.”

Speaking  about  The  Sikh  Awards, The Prime  Minister  of  the  United  Kingdom,  Ms  Theresa May,  sent  the  following  message: “I  am  delighted  to  send  my  very  best  wishes  to  everyone  at this  year’s  Annual  World  Sikh  Awards. Over  half  a  million  British  Sikhs  make  an  immense contribution  to  our  country  in  so  many  ways. Whether  it’s  in  the  fields  of  enterprise  or  skills  or whether it’s the way hard working families who are doing the right thing and getting on in life -Britain’s  Sikhs  are  a  success  story  and  model  community  that  is  doing  great  things  for  our nation. World  Sikh  Awards  do  a  fantastic  job  of  honouring those  with  exceptional  entrepreneurial achievements –people  of  whom  our  country  can  be  truly  proud  of. I  would  like  to  take  this opportunity  to  once  again  to  thank  the  World  Sikh  Awards  for  everything  you  have  done  and continue to do.”

Sadiq Khan, The Mayor of London also sent the organisers of The Sikh Awards the following message  of  support: “I  would  like  to  send  my  best  wishes  and  congratulations  to  all  the nominees  and  winners  of  The  Sikh  Awards. Guru  Nanak  was  born  almost  five  and  a  half centuries ago. His ideas were revolutionary and universal. He upheld the rights of the poor and underprivileged  in  society,  and  travelled  across  Asia  and  the  Arab  world  to  preach  equality  for all people, regardless of caste, religion or gender. The Sikh community continues to follow in Guru Nanak’s footsteps, be it by feeding the homeless, fighting for equal rights for all, and by working hard in all industries and professions. They are an inspiration to all Londoners. London is an amazingly diverse city, and its communities are what make it unique. Much like Guru Nanak’s vision of the world, London is open to everyone, regardless of who they are, where they come from or what they believe in. Thank you to the organisers of the Sikh awards for highlighting the fantastic work from the community.”

Sikhism  is  a  religion  founded  by  Guru  Nanak  Dev  Ji  and  has  over  26  million  followers worldwide. It is ranked as the world’s fifth largest religion.