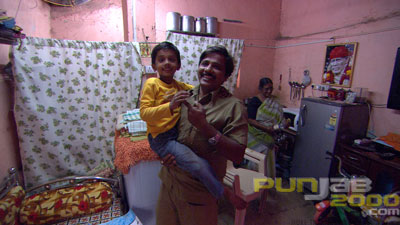 The rags to riches story of young Jamal, a “slumdog” from inner city Mumbai who makes it big on the gameshow “Who Wants to Be a Millionaire” has wowed audiences around the world by its gritty depiction of the poverty that besieges much of the city of Mumbai alongside the innocent love story of Jamal and Latika and the challenges that they must face before realising their destinies.

No doubt that the film has done well to open up discussion about the setting in which this story takes place, and it has certainly ignited a curiosity in those who have probably never been to India to experience the culture first hand. What are the stories of the people in the slums? Can they ever get out? What would they do if they did win a gameshow?

“The Real Slumdog Millionaires” tackles this very question. Set in the winding alleyways of Dharavi, an infamous slum in the heart of the Bandra district in Mumbai, the documentary explores the lives of some of its many inhabitants.

Zara, the 8 year-old who sells flowers to pay for her schooling. Bhumika, the 21 year old who hopes to become a famous Bollywood dancer despite being discriminated against because of burns all over her body.

The most striking story featured is that of Vishal, a rickshaw driver who lives in the heart of Dharavi in a one room house with his wife, son and mother. Beginning his working life at the age of nine after the death of his father, Vishal’s charisma and integrity is undeniable, and only becomes more apparent when he tells you his own rags to riches story; appearing on “Power of 10”, another play-for-money gameshow making it big on Indian television, he won the top prize, a sum of Rs9 lakh (equivalent to £14,000). With his winnings, he pays for a double bed for his mother to sleep on (while he and the rest of the family remain content on the floor), a turtle, an aquarium and a new rickshaw. While it isn’t a huge difference from his former life, he is proud to be able to provide for his family, and they are happy with all that they have.

Would you do the same? Probably not, but it speaks volumes about what he values in life. Ordinary people with extraordinary stories like these make films like Slumdog Millionaire all the more fascinating.

Watch “The Real Slumdog Millionaires” on Sky1 and Sky1 HD on Tuesday 24th Feb at 10pm.