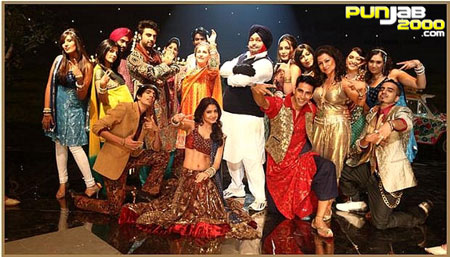 Prepare to be bowled over by one of the most heartfelt and poignant film releases of 2011, ‘Patiala House’, a film that perfectly unites emotion with humour in a family drama that speaks of the cross-generational conflicts that arise from migration, releasing worldwide on 10th February.

Set in London, ‘Patiala House’ transcends age, racial barriers and backgrounds, dealing with issues that resonate universally with today’s multicultural society – a story about family ties and duty, a yearning to follow one’s dreams, and trying to make sense of the dichotomies that life presents when one’s family has migrated to another land.

A film about second chances in life and following your ambitions to turn your dreams into reality, Nikhil Advani (Kal Ho Na Ho, Salaam E Ishq) directs the affecting tale of a son trying to navigate his own way through life while still adhering to his father’s projected ideals and aspirations, but finally deciding to walk his own path. ‘Patiala House’ masterfully blends emotion with humour and will have audiences simultaneously shedding tears of pathos and jubilation.

Leading the cast is Indian superstar Akshay Kumar in an on-screen avatar that’s never been presented to audiences before. An accomplished and leading actor, Kumar juggles the contradictory role of a shop keeper from Southall respecting his traditionalist father, played by veteran of Indian cinema Rishi Kapoor, while pursuing his dream to play cricket for England. Kumar delivers the performance of a lifetime and is joined by a stellar cast of co-stars including starlet Anushka Sharma and veteran actress Dimple Kapadia.

The lasting soundtrack combining soul, spirit and sassiness, penned by acclaimed composing trio Shankar-Ehsaan-Loy, will be sure to linger in the hearts of audiences way beyond the film’s end credits.  Set against the colourful and world-famous backdrop of Southall with its rich flavors and atmosphere, ‘Patiala House’ stands amidst the solid foundations of the local, Indian ‘desi’ community who will fight with their hearts to make their dreams a reality, and who aspire to make anything happen.

With 80 per cent of the film set in England, filming took place in locations such as Oval, Lords and Nottingham Trent Bridge cricket grounds, Covent Garden, Harrow and Southall, as well as in Mumbai where Southall’s infamous Broadway was recreated, detail for detail.

‘Patiala House’ is a film that extends far beyond the cricket pitch – the game is just a catalyst, a tool adopted to touch upon the real message of the film, namely to fulfill one’s dreams and seize the second chance that life offers us, if we missed it the first time round.