The Industry Voting for the IDEA IIFA Awards Nominations would be open from March 28th to 30th 2008. During the IIFA voting weekend, industry stalwarts, actors, directors, producers, technicians, composers and behind the scenes communities are expected to cast their votes, which would decide the nominations for the main awards.

This year the star-studded glamorous IIFA weekend is being held from June 6th – 8th in Bangkok, the shopping paradise of Amazing Thailand. 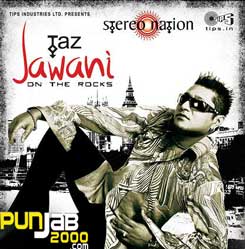 Jawani On The Rocks – Stereo Nation

Stereo Nation is back with a spectacular new offering ‘Jawani – On The Rocks’.
Five years in the making, this is an awesome album that incorporates Taz’s cross cultural vocals and style with urban hard hitting elements as well as some seriously smooth sounds.

Buy The Jawani On The Rocks CD HERE

This exciting deal is an extension of the Bollywood.tv/Essel Group partnership for the (excluding India) world-wide exclusive online rights of the exciting ICL Twenty20 matches that took place from 9th March to 7th April 2008. The www.bollywood.tv live streams of these matches received over one million hits from all over the world.

The ICL World Series is a tri-series tournament which will have three teams – ICL India, ICL Pakistan and ICL World competing for the prestigious title.  It will be held from 9th April 2008 to 15th April 2008 at the Lal Bahadhur Shastri Stadium, Hyderabad.
The tournament will host 7 high-octane matches in total, with each team playing against each other twice, followed by finals – no doubt proving to be another unmissable international event for cricket fans and enthusiasts across the globe.

The development of this partnership between Bollywood.tv and Essel Group displays the significance of a portal such as www.bollywood.tv with its vast reach, global South-Asian targeted audience and the importance of streaming matches live online.

www.bollywood.tv will be the exclusive online portal for viewers across UK/Europe, North America, Middle East, South Africa and Australasia to watch the on-pitch action live as it happens, for only £1.99/USD 3.99/ EU 2.99.

The value of viewing sports online as compared to television is that matches can be viewed live as they occur or downloaded at convenience, providing viewers with the flexibility of time as well as lower costs. In addition, www.bollywood.tv provides its user base with match updates, news and competitions, the opportunity to download matches to view at a later date and free subscription as users only pay a one off cost per match.

With regards to the continued collaboration, which heralds another new phase for www.bollywood.tv, CEO Nigel Glynn-Davies says, “bollywood.tv is delighted to announce our continued relationship and exclusive deal with the Essel Group to streamline the exciting ICL Invitational Cup. The extension of our deal showcases the importance of bollywood.tv and our continued commitment to provide high quality and diverse entertainment for global audiences with more choice, flexibility of time and lower costs.” www.bollywood.tv, launched at the Max Stardust Awards 2008, is the largest online network to host a comprehensive and high quality portfolio of popular South Asian entertainment.

With a 360 degree approach, the www.bollywood.tv catalogue includes movies, film clips, television dramas, stage plays, music and sports. It is also the only online destination that can claim to be genuinely South Asian with content that spans Hindi, Tamil, Kannada, Marathi, Urdu, Punjabi and Bengali entertainment.

With unrivalled potential for the South Asian Diaspora and Bollywood film enthusiasts worldwide, www.bollywood.tv has established synergies with some of the world’s most well known entertainment brands and media outlets. www.bollywood.tv has partnered with major studios such as UTV, Adlabs, Sony Pictures Entertainment and Venus, to stream films, trailers and special clips ranging from the critically acclaimed – Black, Chameli and Raincoat; blockbusters – Rang De Basanti, Swades and Goal; to classics such as Umrao Jaan and Do Anjane.

www.bollywood.tv has developed one of the most technically efficient and user friendly platforms to stream and download South Asian entertainment, following simple instructions that also allow viewers to link their PC’s directly to TV. Virtually all of its unparalleled portfolio of content is held on an exclusive basis and cannot be viewed or downloaded from any other medium.