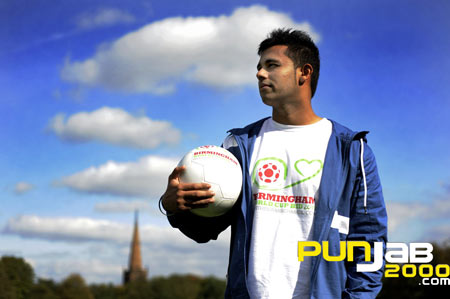 Birmingham raised Asian Music icon and FA coach Jaz Dhami is lending his support to drum up support to back Birmingham’s bid to be a host city for the World Cup 2018 as votes from members of the public will count towards the city’s chances of being selected.

As one of sixteen cities vying to be selected as a host city for the official England World Cup 2018 Bid (www.england2018bid.com) Birmingham has until the 6th November 2009 to submit an official bid to the FA outlining its facilities and plans for the World Cup.

Jaz Dhami who volunteers in coaching with the Birmingham FA’s Aston Football Club said ‘I am fully in support of backing Birmingham’s bid to be a host city for the World Cup 2018 and I encourage everyone to log onto www.backthebirminghambid.com and vote to back our city.’

Birmingham's bid is built on a strong partnership with Aston Villa FC, using Villa Park as the stadium venue and the city's other Football Clubs – Blues and West Bromwich Albion – providing training grounds and camps.

There would also be four team base camps in the region where National teams would stay for the duration of the tournament. The NEC would become the site of a National Fan Park and there would be another Local Fan Park at Cannon Hill Park.

The city’s iconic buildings and venues would also be used for other major elements of the competition such as the official Tournament Draw and there would be a host of ‘live’ sites from to watch matches, whilst the city would be festooned with banners, flags and posters to welcome the national teams and visitors.

Jaz added ‘To see the World Cup heading to the city would be an amazing achievement and will go us the opportunity to showcase to the world  what Birmingham offers in terms of our multi-cultural make up, exceptional infrastructure and tremendous passion for football.  I have a huge passion for sports and to see the greatest sporting event on our doorstep would be amazing which is why I am encouraging everyone to come together and unite as one and back our city’s bid to be a host city for the 2018 World Cup“

Check Out The Rest of The Pictures