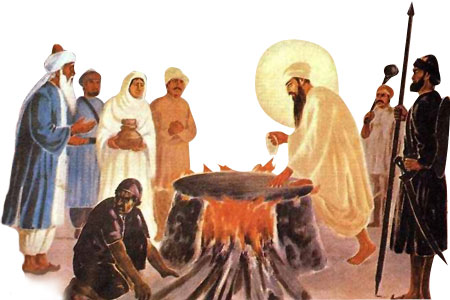 Overview
When: Sunday 5th July 2009
Where: Wymeswold Airfield, Loughbourough, Leicestershire, LE12 5SQ.
What Time: All day event from 5am through till 6.30pm
Parking: Free onsite parking for coaches & cars will be available

The Event
The aim of this event is to pay tribute to the countless Matrys of the Sikh Faith who gave there lives to uphold the values of Sikhi, the values of Truth, Justice, Freedom & Righteousness. They gave up their lives but never gave up their Sikhi.

Throughout the one day event on Sunday 5th July 2009, we will look at into the lives and jeevans of these great Shaheeds and the sacrifices they made for us. From Siri Guru Arjun Dev Ji through to the tragic attacks and genocide 25 years ago in 1984 and the more recent Matyrs against the Choota Sauda sect. It is because of these great sacrifices that we are able to live as Sikhs today.

There will also be SikhiToTheMax translation screens, English Talkers, a number of Youth workshops and childrens activities in order to ensure that everyone who attends learns something of some importance.

Venue
With Satkar of Sri Guru Granth Sahib Ji as the highest priority, many venues were looked at and an ideal venue was found: Wymeswold Airfield, Loughborough, LE12 5SQ. Wymeswold Airfield is an 3 runway ex-RAF Airfield and is now used for farming and track days.

The Airfield is centrally located just off Junction 24 of the M1 and has more than enough space to accomodate the Sangat & Transport as was proven during the 300 Saal Gurgaddi Divas Event last year which saw around 50,000 sangat attending throughout the day with no problems whatsoever. The event will be signposted all the way from M1 Junction 24 on the day.

However, this will not be the last we hear of this day for its legacy will live on, not only in the hearts and minds of the people of all backgrounds who attended but also in the newly formed National Sikh Heritage and Holocaust Museum based in Derby.

Watch the Video from the event

Check out the Photos from the celebration day at  Wymeswold Airfield, Prestwold Hall, Loughborough.