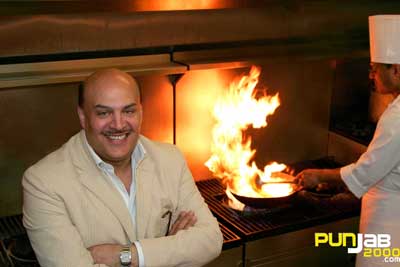 Sanjay started the business as a 17 year-old Punjabi who enlisted his mother as head chef in the 36-seat restaurant. Today, Madhu’s in Middlesex is a two level restaurant that attracts gourmet diners and celebrities from across London.

With forefathers originally from India, in the 1930s Sanjay’s grandparents moved to Nairobi, North Kenya, to set up their family empire. ‘The Brilliant Hotel’ was where Sanjay’s late father made his name with his exceptional and unmatchable cooking talent.

With Kenyan political unrest in the 1970s, the Anand’s moved to the UK and with this move, the empire followed.  Madhu’s In the first four years of the restaurant opening, the clientele was mostly Asian, however after Madhu’s received countless awards and positive reviews, including Timeout and The Good Food Guide, many non-Asians now dine at the fine restaurant.
The Indian Hyatt trained chefs cook some of the Anand signature dishes, Punjabi cuisine with a unique Kenyan Asian twist.  The high profile guests who have enjoyed Madhu’s fine cuisine include former England cricket player Ian Botham and American pop star Tina Turner.Following a disastrous fire in 2002, Sanjay refurbished the restaurant with a chic new style that now includes a calming water feature underneath the glass floor at the entrance, black granite features, modern high chairs and polished floorboards.


Moving from strength to strength, Madhu’s is established in the catering industry as the top UK Asian outside caterer, the only and first Asian caterer accredited by the top West End hotels including London’s Hilton on Park Lane, Café Royal, Carlton Tower and Grosvenor House Hotel. Madhu’s regularly caters for some of the most prestigious events in the UK, including the Asian Business Awards attended by HRH Prince Charles, the Duke of York and HRH Prince Michael of Kent.