Graham Taylor has paid tribute to the army of volunteers at Britain's junior football clubs and insisted:  Every one of them deserves a medal.

The former England manager, a committed advocate of grass roots football, insists a huge debt of gratitude is owed to every volunteer for their commitment, dedication and sacrifice.

Taylor was the star guest in at Knowle FC this week as part of the build up to the brmb Grass Roots Football Show which takes place at the NEC in Birmingham. Former England Manager and Precision Training ambassador, Graham Taylor, said;"It is fantastic to see such a vibrant football club with so many boys and girls enjoying the game at grass roots level. "Grass roots football is the lifeblood of the game in England and it is vital that we continue to do all we can to support the game at this level. "Where did David Beckham or Wayne Rooney start?  It was at grass roots and the future of football in England is dependent on clubs like Knowle FC."

Graham Taylor will be appearing at this year’s brmb Grass Roots Football Show which takes place at the NEC in Birmingham between the 3-5 of June. 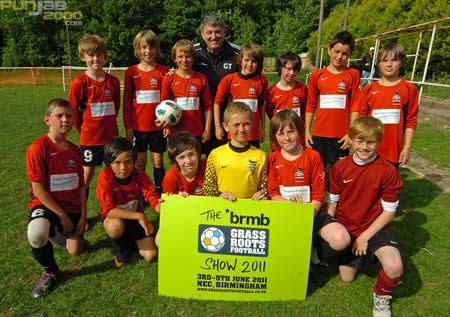 Tickets – priced from £8 for adults and £4 for children under 16 – gives you exclusive access to all three days of the must attend football event this summer and they are now on sale at www.grassrootsfootball.co.uk