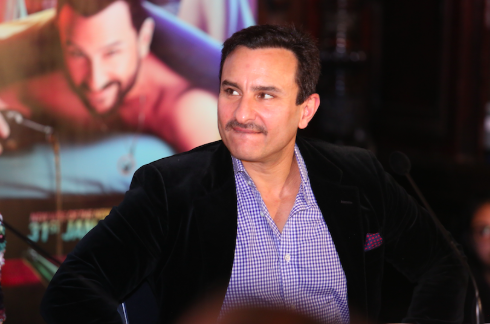 Media and influencers witnessed an entertainment industry first when the much-anticipated trailer for quirky, romantic comedy drama, Jawaani Jaaneman, was unveiled as a World Exclusive in London on Thursday 9th January at Grand Royale London Hyde Park. The event marked the first time a Bollywood trailer has been launched in the UK capital and the second time ever that a trailer has been launched outside India, attended by the film’s lead actor and co-producer, Saif Ali Khan, and producer, Deepshikha Deshmukh.

The trailer received unanimous plaudit from the attending guest list, fuelling the buzz that had been initiated by the initial teaser. Speaking about the film’s premise, actor and co-producer Saif Ali Khan said, “A theme emerged that this film is about acceptance, accepting your age, your responsibilities. I think most people who are like that would react like this.”

About reuniting onscreen with industry colleague Tabu he said, “It feels great as she is an amazing actor. She is immensely talented and compelling to watch onscreen. She’s also extremely funny and such a delight to work with. I’m so grateful that she’s a part of this film.”

Speaking about casting Saif in the lead role, producer Deepshikha Deshmukh, Pooja Entertainment said, “Saif just fits the bill. I think there’s nobody else who could play this character.”

Elaborating on the projects green lit by the production house she said, “Whenever we make a film, both Jackky and I are mindful of the legacy we have to live up to. Wholesome entertainers are our forte and we can proudly say that Jawaani Jaaneman lives up to it. The trailer response has been stupendous, it’s very encouraging to say the least.”

Regarding recreating the classic song Ole Ole for the film, she added, “The song is in the film because the character demanded it. Every single lyric match and is exactly what the character Jazz is.”

Presented by Pooja Entertainment in association with Black Knight Films and Northern Lights Films, Jawaani Jaaneman is scheduled to release on 31st January 2020.