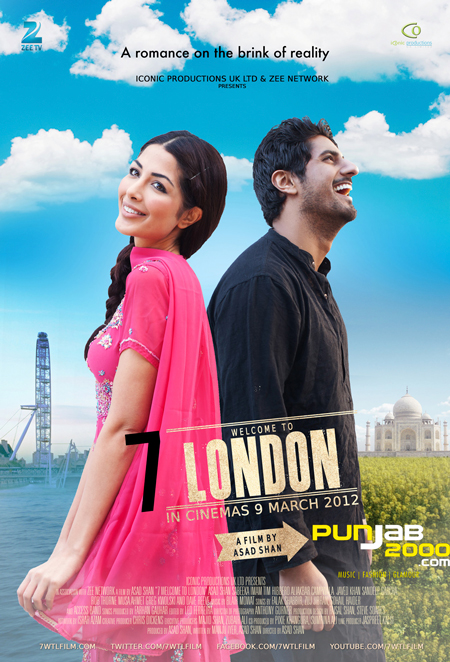 Jai (Asad Shan) is a simpleton middle class young man from Delhi, who has aspirations of migrating to London for a better future.

Focused and determined, Jai gets a tourist visa, finds a job, and falls in love.  Simran (Sabeeka Imam) is a hard working young woman looking for her ShahRukh Khan whom she accidently meets on a train.

Together the pair looks toward a bright future but one-phone call changes their destiny forever.  The next 24 hours will change their lives forever.This Soundtrack album consists of 7 melodious tracks and has 3 super stunning remixes including club version.

Falak released his first single in 2008 titled ROG and became a household name.

ROG was nominated for TMA award followed by his super hit romantic number TERA SATH HO which was nominated for MTV Award and those two tracks alongside his new unreleased single MERA MANN were picked up for the British Hindi Romantic Feature Film 7 Welcome to London.

Falak is one of the most established names in Pakistan's talented music industry.
YAADAN / YAADAN REMIX
Singer: Access Band  Ashley Clements and Asad Ali Khan are the fantastic deadly duo of the Access Band. Ashley’s genre of music is Pop, Ballads, Reggae and Hip Hop. He is a versatile singer who can sing in three languages.  Asad is a trained classical singer, hailing from the renowned classical music family known as Gwalior, headed by the likes of Ustad Mian Banne Khan, Ustand Gamman Khan, Ustand Mubarak Ali Khan and Ustad Ashiq Ali Khan.

BAYRUKHI / HUM ADHORAY
Singer: Zuj Jibran ZUJ (pronounced Zooj) is a solo Rock artist hailing from Lahore & Islamabad. Having started his musical career in 2006 with the song PHOOK LAY, which eventually became the official soundtrack of the movie Zibhakhan. He then released a mellow number, BAYRUKHI along with HUM ADHORAY, which were picked up by Iconic Productions UK for their British Hindi romantic thriller 7 Welcome to London. Zuj best describes his music as the sound of his emotions and as a testament.

PAAS AAKAY / PAAS AAKAY REMIX
Singer: Sohail Haider PAAS AAKAY is all about making and spreading love, as there is nothing but music in this world, which has no barrier and is the easiest way to convey the message of love and peace. Lyricist and composer Sohail Haider has sung this stunning track.