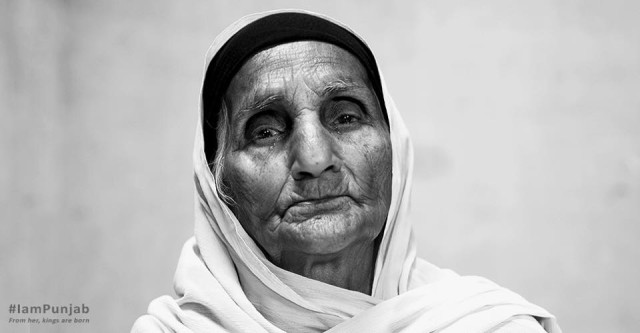 “They (Police) killed my son Manjit Singh in the most inhumane way, his body was mutilated.” Surinder Kaur recounted the killing of her son with tears welling in her eyes and long pauses. After her son’s brutal execution in 1987, the whole family became victims of routine Police harassment and torture. Her 2 sons were imprisoned without charge for over 2 years.

“Our home was forcefully taken from us by the police and given to another family in the village. I had to remain strong for the rest of my family. I was still grieving my son Manjit Singh when I had to make long journeys to the prison to visit my other sons. I have no idea how we remained alive, God protected us.” Surinder Kaur remains strong and in great spirits despite the suffering she had to endure.
“There are many more families in a worse situation than us. I am content that my family are together and have overcome so many hard times.”
Surinder Kaur’s left leg had to be amputated in the 1990s due to medical reasons and lack of funds for the expensive treatment.
What Is #iamPunjab

As the world commemorates International Women’s Day, Khalsa Aid is dedicating the next week to highlight the plight of Punjab’s forgotten mothers and widows. They suffered physical and emotional hardship but these spirited women remained defiant in the face of adversity. Over the coming days we will showcase the story of those courageous women who lost members of their families.
The stories highlight their pain, sorrow and continued hardship but also their iron-like resolve to righteousness and honour. For centuries, the women of Punjab have been the backbone of the region. #iamPunjab is a commemoration of their strength and resolve.
Khalsa Aid continues to remember and support these women in their time of need. Will you?
www.khalsaaid.org
7 years ago in Latest
#IamPunjab1984 Sikh GenocideDharam SevaKhalsa AidPunjabRavi SinghSikh Political PrisonersSikhsSOPWThe Widow Colony