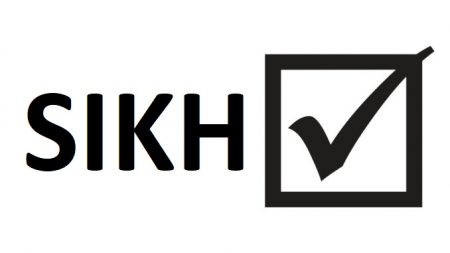 High Court judge grants permission to the Sikh Federation (UK) for judicial review hearing to decide whether the decision not to include a Sikh ethnic tick box option for Census 2021 is unlawful
A High Court judge has considered the written submissions by the Sikh Federation (UK) and the counter arguments of the Cabinet Office and has granted permission for a judicial review hearing.
A High Court hearing lasting one and half days will be scheduled to take place later this year.
Bhai Amrik Singh, the Chair of the Sikh Federation (UK) speaking after the Court Order giving permission to proceed said:
“This decision by Mrs Justice Thornton sends a clear message to the Cabinet Office that our claim has legal merit.”
“Obtaining permission to proceed and a hearing date should focus the mind of those at the Cabinet Office on the need to intervene.”
“The Cabinet Office must now review the evidence available surrounding the decision-making process, including the new evidence we uncovered in the 6-month period between the White Paper and launching the legal challenge.” 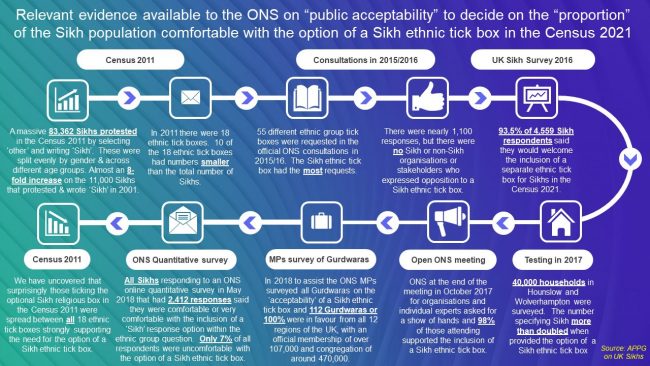 “The Cabinet Office will also want to look at how the Office for National Statistics (ONS) has retrospectively tried to justify its decision by raising certain matters and arguments in the legal exchanges that were non-existent in the 5-year period leading up to the Census White Paper proposals.”
“We are extremely confident our claim will succeed in court and it would be better all round for the Cabinet Office to concede on the need for a Sikh ethnic tick box in the Census 2021.”
This is a huge breakthrough for the Sikh community as the High Court judge the Honourable Mrs Justice Thornton DBE has accepted that we have an arguable claim for judicial review.
We have argued the Census White Paper merely provided a basis for further consultation and discussion. Since the publication of the White Paper we have met and exchanged correspondence with the Cabinet Office Minister, ONS and the National Statistician. However, the National Statistician continually refused, as recently as mid-May, to accept our arguments and the evidence we presented for the option of Sikh ethnic tick box. Accordingly, we started legal proceedings within a matter of days.
What is unusual about our claim on behalf of the Sikh community and with the support of over 150 Gurdwaras and Sikh organisations is that our challenge is brought in advance of the Census Order being presented before Parliament. By granting us permission, the court clearly considers it to be arguable that we can bring the challenge before, rather than after, the draft Census Order is laid. The reason for us doing this was to avoid prejudicing good administration, which would arise if our challenge were delayed until after the Census Order is presented to Parliament.
We have argued that it would be unlawful to exclude a Sikh ethnic group tick box from the 2021 Census, on the basis of the reasoning in the White Paper, which is procedurally flawed. The ONS’ recommendation not to include a Sikh ethnic group tick box was made without the application of the ONS’ published evaluation criteria, in particular without lawful consideration of the “impact on public acceptability” of the inclusion of a Sikh ethnic group tick box. We have also argued that the “public acceptability” criterion was applied inconsistently to questions considered for inclusion in the 2021 Census.
In granting us permission, the High Court judge has accepted we have an arguable case that the ONS processes were procedurally flawed.
In what we believe to be a desperate attempt to move the goal posts, and in response to our legal arguments, ONS published a paper in June 2019 that suggested a prioritisation tool similar to the one used a decade earlier with a few modifications had been used.
However, in the last 5 years ONS has never mentioned the use of the prioritisation tool in any meetings with the Minister, MPs or Sikh community representatives or in any correspondence or publications. We believe this fact will not be lost on a High Court judge who we believe will be sympathetic to our claim.
Rosa Curling, of Leigh Day solicitors said:
“Our clients are delighted the court has confirmed their legal challenge needs to be considered. The allocation of public funds is determined, in part, by census information. Our clients believe their community has been unfairly neglected as a result. Ensuring a Sikh ethnic tick box is included in the next census is crucial to addressing this ongoing discrimination.”
David Wolfe QC and Ayesha Christie of Matrix Chambers are instructed in this case. 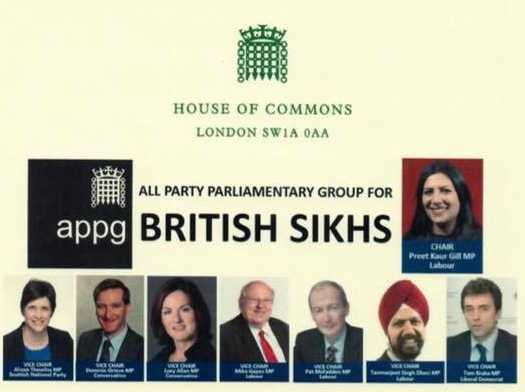 Gill MP, the Chair of the All Party Parliamentary Group for British Sikhs reacting to news of the High Court Order said:
“The ONS left the Sikh community no option but to take the Cabinet Office to the High Court with a judicial review claim to ensure it is fairly treated and bring an end to institutional racism by public bodies as a direct result of ONS decisions with respect to the census.”
“MPs are very clear from direct interactions with the former National Statistician who has now retired, his Deputy and senior ONS officials over the last two years, including since the Census White Paper was issued last December that ONS to keep its reputation intact must ensure there is the option of a Sikh ethnic tick box in the Census Order to be presented to Parliament.”
“This is not just about the legal recognition of Sikhs as an ethnic group since the landmark ruling in the House of Lords in 1983 but also the wide-ranging evidence ONS has collected that has now come to light.”