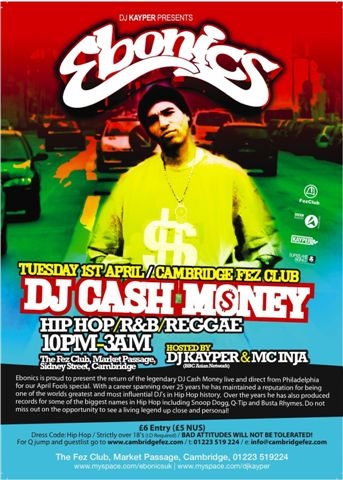 ) people the low down.

So for those of you, who have not heard of Cash Money, he's a ol skool Hip Hop DJ  & Producer with a career going back over 25 years in the game.
He's also the 1988 DMC (Dance Music Club) Workld Champ, and has produced tunes for the likes of Busta Rhyme, Snoop Doggy Dogg, Q Tip etc.

So we get to the Fez about 12.45 AM (And the guys were saying they would only come if we left about 1AM).

But anyway we walked in on the guest list thanks to our gal Kayper!!!
So after we let her know we're in the playground, we do what most people in our shoe's would do & hit the bar first

So now we`re settling into the grooves & I say thins everytime I got to Ebonics, the crowd is one of the most chilled I have ever seen, and I know I speak for all the guys, that the katties are fireing in that place as well.

But anyway getting back to the night now, We caught about the last 15/20 minutes of Kaypers set along sinde Mc Inja.

I'm not gonna even try & remember what she played, but as usual she kept the crowd going with her beat matching & sliceing skillz.

Come 1AM & the man himself that we had come all the way to see came on & took the decks & was introduced by Kayper to the crowd.

From that point onwards I don't think I left my spot on the side of the stage. Ca$h Money was abousltely amazing, I would put him on the same level as Jazzy Jeff in term of mixing, well maybe 1 down from Jazzy Jeff, but his skills on the decks were CRAZY!!! At one point he started scratching with his chin, then spiining around and mixing while facing the oppersite direction!!

It's the kind of stuff you only see in the movies, but not in real life.

Thru out his 2 hour set Ca$h Money was playing everything right from Ol Skool to the Mid skool 9o's tune's to the present  day nu skool stuff.

To many tunes to even try &  remember, what they were.

Personally I think the highlight of the evening was the MC clash, between Inja (Kaypers MC) & All Point (Ca$H Moneys MC).  All point was on the mic doing his thing when Inja came up  & wanted to spit a few rhymes & from there, it want ballistic! Best way to discribe this is think 8 miles the Eminem movie. 1 dj on the decks & 2 mcs on stage battleing it out.

It was CRAZY!, from there Ca$h Money give a little speach abut Hip Hop & what it's about & what it means to be a Real Hip Hop DJ /MC.

The night ended & the trip back to Leicester began, which is another story all together.