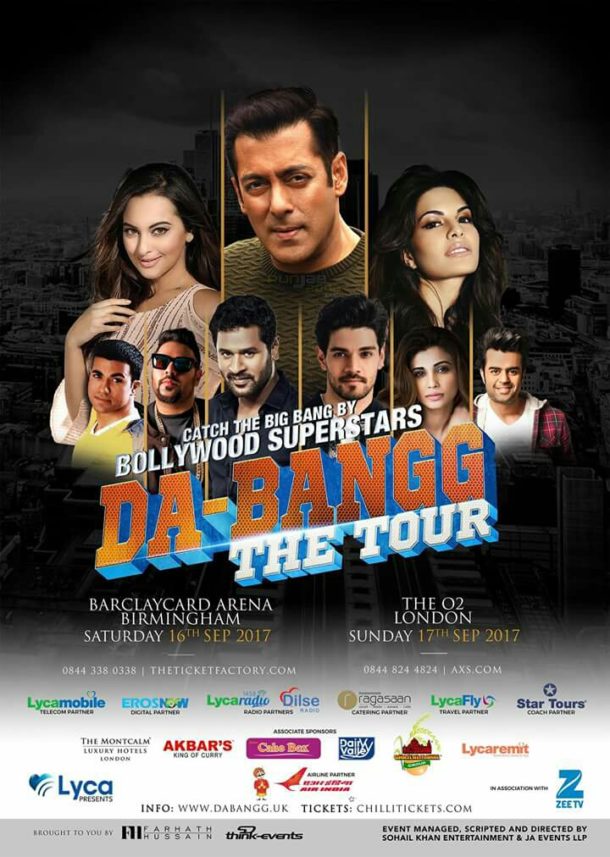 Brought to UK audiences by Farhath Hussain & Think Events, DA-BANGG THE TOUR – The Hottest Tickets in Town now on sale! 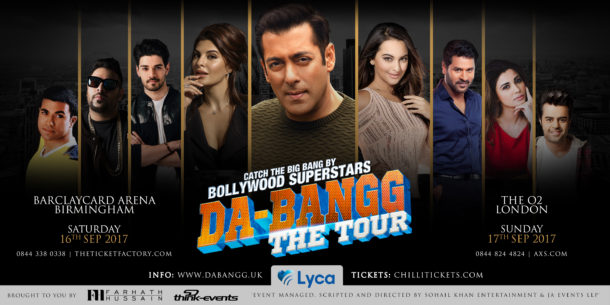 The hottest tickets in town are now on sale for the live event of the decade – DA-BANGG THE TOUR. Featuring Bollywood megastar, Salman Khan, live onstage in the UK after 12 years accompanied by a galaxy of stars, DA-BANGG THE TOUR will take place at Barclaycard Arena, Birmingham on Saturday 16th September; and The O2 Arena London on Sunday 17th September. The stage extravaganza is presented by Lyca and brought to UK audiences by Farhath Hussain and Think Events. Ticket purchases have now gone live via: www.chillitickets.com, www.axs.com and www.theticketfactory.com.

DA-BANGG THE TOUR is event managed, scripted and directed by Sohail Khan Entertainment and JA Events, who have conceptualised and created the world’s biggest Bollywood live show to date, enriched with top-scale technology and production. Ready to present UK fans and audiences with a once-in-a-lifetime experience this autumn, DA-BANGG THE TOUR will also welcome an impressive troupe of 120 dancers, technicians and creatives from India in the most slick and superior Bollywood stage show to date. 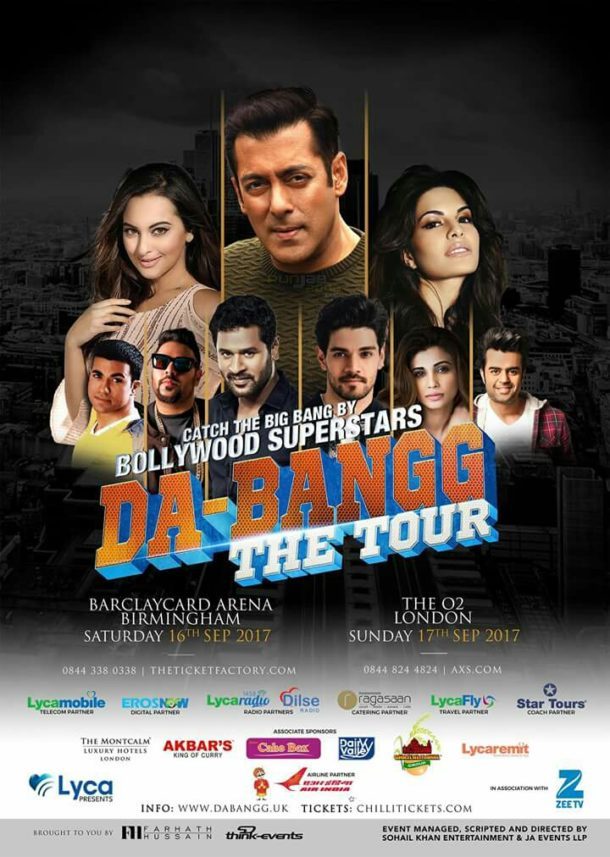 Tickets on sale via:

Tickets on sale now at:

Lyca Group is a British multinational corporation delivering the world’s largest range of services and products to ethnic and expatriate communities across telecommunications, financial services, travel, healthcare and entertainment.

Lycamobile, Lyca Group’s flagship company, is the world’s largest mobile virtual network operator, operating in 21 countries, and is the market leader in the international prepaid mobile calls market, with over 15 million customers worldwide and a new one joining every two seconds. Founded in 2006, it has fast become a global brand synonymous with connecting customers with their loved ones both nationally and across oceans, borders and networks at the lowest possible price.

Lycamobile’s sheer span, focus on customer service and innovative business strategy has seen it outgrow its competitor set; achieving greater coverage of the European population than any other network operator. The business continues to make in-roads to new markets on a regular basis, most recently adding Macedonia, with plans for additional launches this year.

Farhath Hussain entered the live events industry at a time when Bollywood was beginning to find its global audience. He played a critical part in this global movement and is, today, internationally recognised as a pioneer in Bollywood live events.

Farhath’s first show took place in his home city of London in 1986 at Wembley Arena and he followed up a year later with a show at Royal Albert Hall. Three decades on and Farhath has consistently provided his audiences with top billed shows each year – the only promoter in his field to achieve this feat. With over 500 shows under his belt, Farhath’s territories are now global; he leads the way in the UK, Europe, USA, Canada and the Middle East.

Farhath’s shows remain the only cultural events to bring the South Asian diaspora together in record numbers. In 2014, his take on the UK leg of SLAM+ The Tour at the O2 Arena, London made it the fastest-selling and highest-grossing Bollywood concert of all time, once again affirming Farhath’s status within the industry.