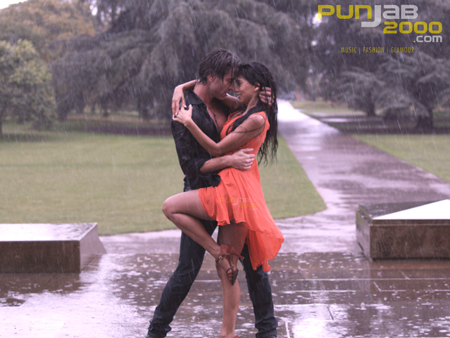 Cast dance in real downpour on the sets of ‘BollyBrit’ film, Naachle London

On one of the filming days for Naachle London, director Neville Raschid was anticipating a glorious, sunny day at Kew Gardens in preparation of outdoor scenes, as well as inside the infamous Greenhouse. But once the crew began shooting the sequences inside the Greenhouse, the heavens opened up, inducing the wettest day of the year instead of the hottest!

As the crew were setting up between shots, British screen heartthrob Jake Canuso informed Neville that he was happy to dance in the rain and duly stepped outside. Neville then asked Fagun Thakrar, Jake’s co-star, and she was equally willing to take up the challenge, after looking outside to see Jake already getting his hair wet and practicing his moves in the downpour.

And by pure serendipity, some of the most stunning shots of the film were created… with entirely natural rain and no need for rain machines!