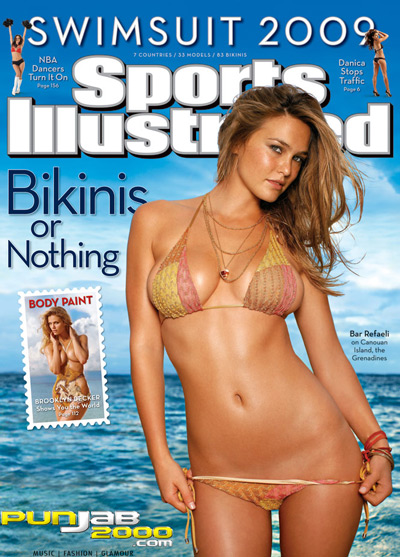 (NEW YORK, February 10, 2009) – From the beach on Canouan Island in the Grenadines, supermodel Bar Refaeli graces the cover of the highly anticipated 2009 Sports Illustrated Swimsuit Issue on newsstands today.  Refaeli, a three-year veteran of the Swimsuit Issue, is the first Israeli model to land the cover of the coveted magazine.  Photographer Raphael Mazzucco, who also photographed the 2008 cover of Marisa Miller, captured the cover photo during a two-day shoot with Refaeli on Canouan Island in the Grenadines.

The 2009 Swimsuit Issue takes a journey to four countries with ancient cultures and pillars of modern beauty and makes stops in Naples, Italy; Cappadocia, Turkey; Riviera Maya, Mexico; and Tenerife, Canary Islands.  The cover of the iconic magazine is billed, Bikinis or Nothing, and showcases a photo of Brooklyn Decker displaying a map of the world – in only paint!

The Sports Illustrated Swimsuit Issue, a staple of American popular culture, will reach an audience of more than 66 million and there will be more than 350 million page views on SI.com/swimsuit.

“This issue brings together all of the elements that make SI Swimsuit Issue the most anticipated magazine in the world every year,” said SI Group Editor Terry McDonell.  “The photography is perfect, the locations make you want to go there yourself and the models are full of surprises.”

OFF WE GO:  Brooklyn Decker, Jarah Mariano, Bar Refaeli, Hilary Rhoda, Jessica White bring their distinct vibe to Canouan Island, in the Grenadines, the first stop on the ’09 Swimsuit tour.

NAPLES:  The Swimsuit odyssey continues to mystical lands where Roman, Mayan and Ottoman cultures once flourished, and to volcanic islands that were stepping stones to the New World.  Amid treasures of the past are found pillars of modern beauty with Esti Ginzburg, Daniella Sarahyba and Irina Shayk.

TENERIFE:  On this rocky and rockin’ archipelago off of Africa, bikinied Cintia Dicker, Jessica Gomes and Tori Praver bring the magma to a boil.