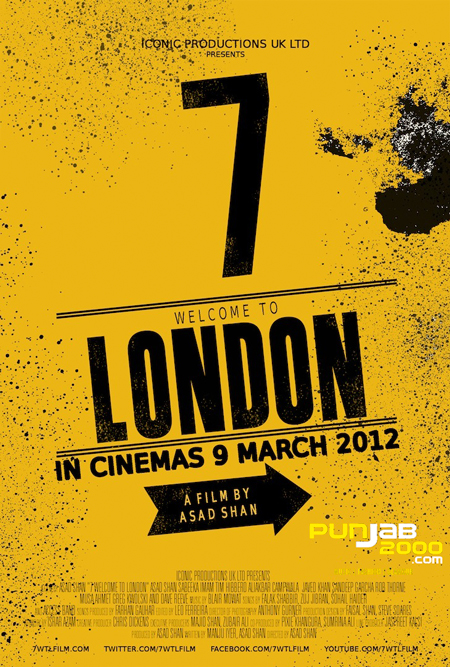 Yusuf Khan, Salman Khan, Shahrukh Khan & Aamir Khan are the legendary Khans of the silver screen. Now, get ready for a fresh, new, young talent bursting onto the big screen! It's the turn of the Shan, Asad Shan! He brings you a cinematic invasion at its finest, and gets your senses going all over the place in a sensational romantic thriller!

Bollywood Films, the UK's pioneering Distribution Company has acquired the Exclusive International Distribution Rights of spectacular movie "7 Welcome to London” This exceptional cinematic offering grabs the quintessential flavour of the Bollywood genre whilst retaining a true British heart. The fast paced thriller centres around the struggles and hardships faced by a young immigrant from India, who feels that London will allow him to fulfil his dreams and aspirations. Whilst he finds love on the underground, one phone call changes his life forever.

7 Welcome to London is a breath taking, stylized and utterly ghoulish thriller crafted in a gritty manner that accentuates the film's edgy vision. The stunning film explodes with multiple layers of meaning, tone and mood to get your mind flowing like never before!

After watching ‘7WTL,’ Joe Mirza, Managing Director for Bollywood Films expressed, I was very excited and had to be acquiring this film at the earliest. This film is set to break new grounds in home grown talent and caters to our solid Bollywood loving audience …  You guys will love this film. Get excited for a new era in British Asian talent.”

‘7 Welcome to London’ brings homegrown UK talent to the forefront right from the cast to the entire film unit.  Bafta and Oscar winning editor Chris Dickens is the creative producer for ‘7 welcome to London’ and has seamlessly blended Bollywood with international film stylistics and techniques.

‘7 Welcome to London’ marks the debut of British Asian VJ Asad Shan in this stylish and unnerving Hindi romantic thriller.

You should see it because: Film noir meets Bollywood in this ‘on the edge of your seat’ romantic thriller.

Jai, a hard-working young Punjabi man from Delhi arrives in London, leaving behind his debt-ridden family, to fulfil his dream of a better future. Initially, luck shines on Jai and whilst discovering London, he forms an unlikely friendship on a ghetto estate, and furthermore his life is transformed when unexpectedly he finds love on the underground. But Jai's happiness is short-lived. One phone call changes everything. Jai is left trapped in a dark and dangerous existence where only a jungle law exists. The hunt is on and he is running on quicksand…"