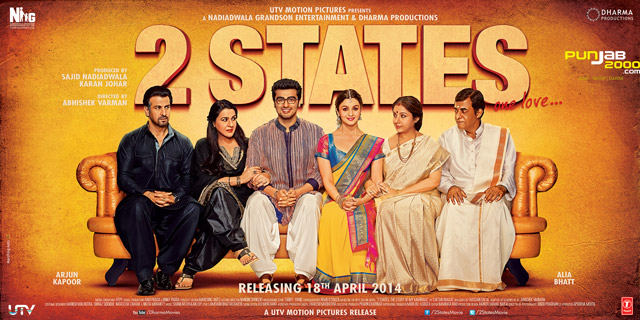 2 States Trailer gets over 6 million hits!

The trailer for 2 States has kicked off to a great start as it receives more than 6 million hits!  The film, which is directed by Abhishek Varman, is based on Chetan Bhagat’s best-selling novel, 2 States and follows the story of a young North Indian boy (Arjun Kapoor) who falls in love with a South Indian girl (Alia Bhatt). It is a tale of the struggle they face trying to convince their parents to approve of their marriage.

Commenting on the success of the trailer, Abhishek Varman said: “I feel the trailer works as it gives you the story of the film, which is a bit of comedy and a bit of romance. The film is balanced for both, the youth and the family audiences, and has thus helped it connect with a larger audience. The book is widely read and that too helps in enhanced viewing. Despite not having your quintessential big stars, the number of views is the best compliment to the trailer. My brief from Karan Johar was to have it instantly connect. Now, I just hope that the trailer viewing converts into box office numbers.”

The captivating novel is said be true to life, inspired by the Chetan’s real life experiences as his wife, Anusha, is from the South while Chetan is from the North. Whether it’s down to Chetan’s huge following or the rumours of Arjun and Alia’s off-screen relationship , the trailer seems to have really captured the heart of the audiences.

2 States is produced by Nadiadwala Grandson Entertainment and Dharma Productions and released worldwide by UTV Motion Pictures. The film releases on 18th April 2014.