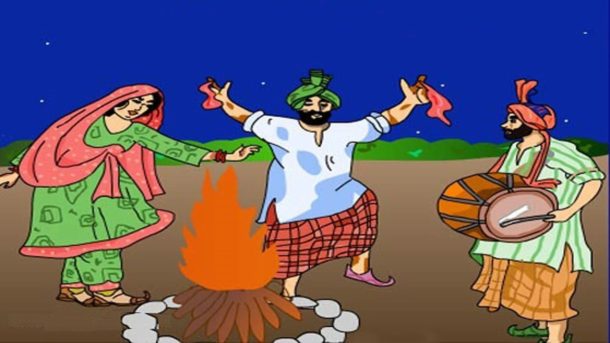 A Panjabi festival usually celebrated on the 13th January of every year, commonly associated with the birth of a boy and newly weds. Personally my family have always celebrated Lohri when any child was born so when I was told that there are certain families that celebrate this festival, only on the birth of a boy I was shocked.

Lohri is marked by lighting a bonfire throwing popcorn, sweets, till, puffed rice into this by family and friends and traditional dancing and singing.

However, historically its the celebration of the end of the winter in North of India.in In Panjab, children are told stories of Dulha Bhatti ‘Panjabi Robin Hood’ who robbed from the rich and helped the poor, and go around singing songs in praise. In certain regions children go door to door singing these songs and are usually given money by their neighbours. He was also known for opposing abduction and selling of girls into slavery and would arrange marriages for them and provide dowries. A popular song that is sung which has been showed in the Bollywood film ‘Veer Zara’

In time with Lohri, Kaos Productions are releasing this week ‘Theeyan Sir Da Taaj’ by Ranbir Singh and the proceeds will be going to UNIQUE HOME FOR GIRLS in Panjab.

However you celebrate Lohri please let’s all remember that our daughters are just as important as our sons!