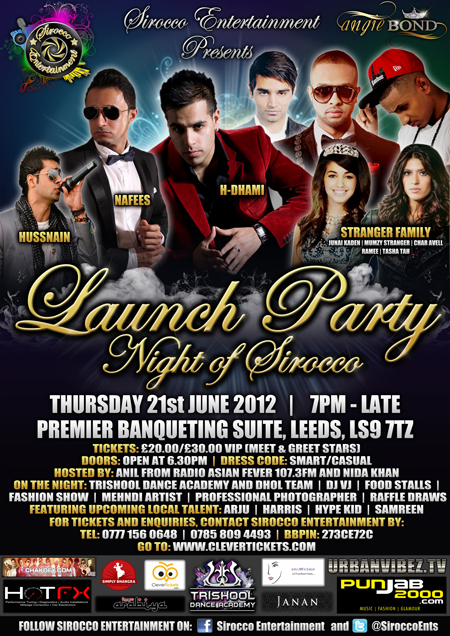 Night Of Sirocco at the Premier Banqueting Leeds

Thursday 21st June 2012 It's the Official Launch Party of Sirocco Entertainments as they bring an A-Class family event with the Best Artists & Entertainment at a prestige venue in Leeds, Premier Banqueting.

Come, enjoy an evening with a difference. A 'Night with Sirocco'  with 'Quality Music and Quality Entertainment'. Treat yourselves to the finest delicious food including mouth watering Kebabs, Samosas, Chaat, Biryani and so much more (available through the show).

Take a Professional Photo with our Photographer – Zircon media photography capture the evening's ambience for you to take home in a memory. Have fun with the designs from our Mendhi Artist and take part in the Raffle draw to win lots of prizes, lots more on the night with different services/stalls. The doors open at 6.30pm…

Your hosts for the evening will be presenter Anil from AsianFever Radio Station 107.3 FM & Nida Khan Presenter from Venus Tv / former Model & Winner of Miss Kool Asia 2007 with Stage Music by DJ VJ Roadshow… Trishool Dance Academy will be entertaining you with a mindblowing performance to kick start the show.

Followed by the new kids on the block the Hottest new talent on the scene: Samreen, Hypekid, Arju & Harris Samreen – Sirocco's very own female singer with unique style.Arju – Female rapper from yorkshire likened to Lowkey with her style and flow. Harris – Male rapper, unique in his flow. Hypekid – producer, singer, rapper. Performed at many carnivals and events worked with zide zed.. only 17. .

Bridal & Party wear – Exclusive Fashion Show Courtesy of Janan from Bradford, hosted by Asiya MUA Zaman. Live Performances by the No1 Artists on the scene..

The Hot Steppers.. H-DHAMI, NAFEES, THE STRANGER FAMILY, HUSSNAIN H-DHAMI, top performer and award winning artist, who had the fastest selling album with sadke java, son of Palvinder Dhami Legedary Heera group.
Expect to hear exclusives on the night from H-Dhami as he will be releasing his new dvd remix album soon followed by, a song with top hit Singer Garry Sandhu and many more….

NAFEES, a new singing sensation with hits like 'Mehman' 'Teri Yadon Mein' 'Bari Sohni' and the anticipated wait of the new single 'DUA'. His arrival on the music scene has blown many people away with his style of singing.

HUSSNAIN – from pakistan lahore moved to the Uk in 2001, bringing the unique Sufi Style. He was part of band called Rogue from 2009-2010 but is now currently working on his debut single releasing soon.

ENTRY: Open to all DRESS WEAR:  Smart, Formal or Traditional because this event is all about style.