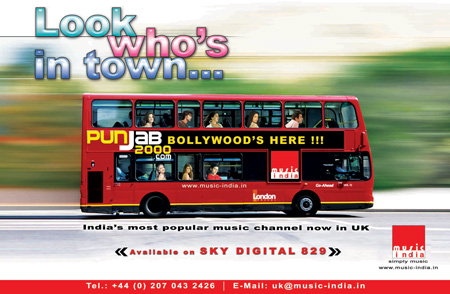 Music India touches down in the UK

Music India, the most diverse and output advanced satellite television platform to showcase a
rich and varied programme of Hindi music 24 hours a day, has finally arrived in the UK as part
of the SKY DIGITAL bouquet, Free to Air on SKY DIGITAL 829.

Serving a trans-global Indian community with the growing need for quality entertainment lies at the foundation of Music India’s key ethos. A subsidiary of Media Worldwide Pvt. Ltd, the pioneers
in the concept of marketing films and music on Indian television, Music India has already
carved a distinctive and recognisable niche in the minds of viewers across the Indian
subcontinent, precipitating its expansion to the UK market.

An out and out Hindi music channel that delivers the finest combination of both Bollywood and commercial Hindi pop music 24 hours a day, Music India has rapidly become one of India’s
leading music satellite channels, dedicated to delivering superior quality and top end impressions
and packaging to its viewers and showcasing the widest cross section of Hindi and Bollywood music, both conventional and contemporary.

Music India is the only genuine Hindi music channel to provide content developed by the people,
for the people and has the necessary trade edge over its competitors, due to the long-established relationships that exist between the channel’s professional team and the Bollywood industry’s filmmakers, stars and stalwarts. As a result, Music India has already established an unprecedented following among viewers since  its inception.

Music India’s varied audiovisual experience caters for a broad demographic of audiences,
appealing to both viewers young and old. Encompassing within its package the full range of Bollywood musical genres and related programming, Music India showcases the most up to date film news, Bollywood celebrity gossip and star interviews, behind-the-scenes footage and peeps into Bollywood backyards, as well as transmitting an eclectic combination of Bollywood film songs, from the latest releases to evergreen Bollywood classics, as well as regular news and updates on non-Bollywood related Indian music.

Recognising the void that has until now existed in the UK market with regards to Hindi music programming, Music India provides a refreshing alternative to the stagnant and limited repertoire
of programming offered by its current counterparts. In commenting about the exciting arrival of
the leading and most avant-garde Hindi music channel in the UK, Prashant Chothani,
Director, Music India comments, “Since its inception in India, Music India has had
such an overwhelmingly positive response from audiences. In keeping with the expansive
tastes of differing demographics that comprise the billion odd population of India, we
have had to put ourselves several steps ahead of the game and ensure that our
schedule of programming caters for all tastes and interests.

“As we continue to grow and expand organically, the next step has been to launch into the UK market. On the basis of years of experience within the industry, our professional team,
which is made up of experts with an insightful knowledge of the worldwide marketplace,
including the UK, have put together a package that is unparalleled by our competitors,
and is sure to win the favour of audiences across the UK.”