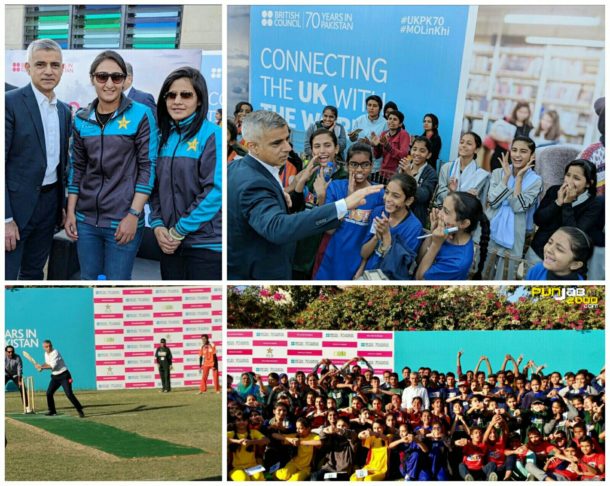 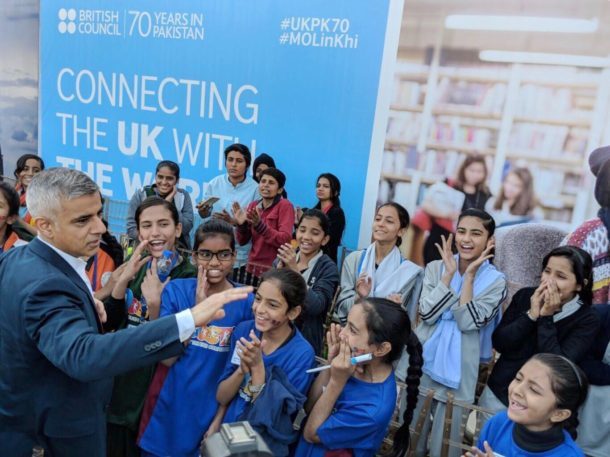 Karachi, Pakistan – On the final leg of his six-day trade mission to India and Pakistan, the Mayor of London visited the British Council in Karachi to meet participants in their ground-breaking DOSTI project.

The DOSTI project, established by the British Council in Karachi in 2012, works towards breaking social barriers and bringing groups of young people together through sport. The scheme has proved extremely successful, with one of the participants – Umama Asif – going on to play at a national level for the Pakistan Cricket Board (PCB). 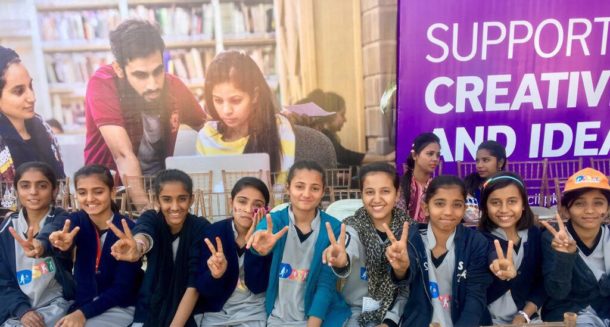 Following the success of the initiative in Pakistan, the DOSTI project has expanded to include India, Afghanistan and Sri Lanka, using football and cricket sessions to build trust, reduce conflict and create safer, stronger and more respectful communities. 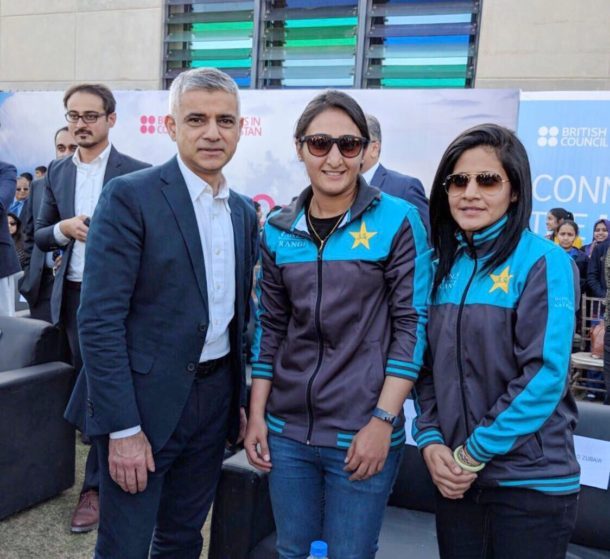 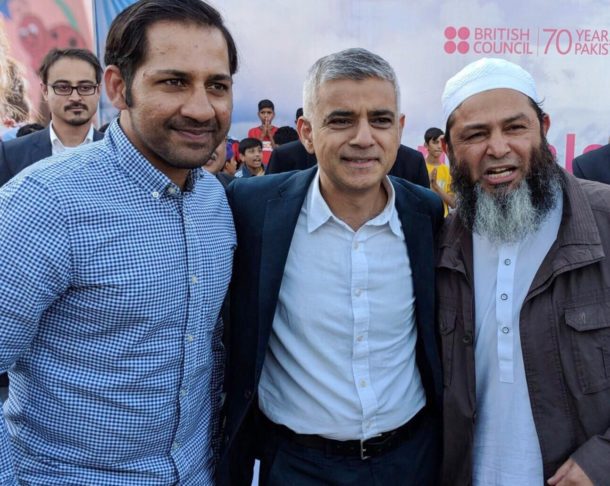 The Mayor joined the young cricketers for a few deliveries during a practice session and presented them all with special Surrey County Cricket-branded ‘wind balls’ (practice cricket balls) as a memento of the visit. Sadiq is a keen cricketer. When he was 15, he trialled for Surrey County Cricket Club.

Mayor of London, Sadiq Khan, said: “It has been fantastic to see the passion and skill of Karachi’s young cricketers. This just goes to show how grassroots sport can inspire and change lives of young people all over the world.

“The power of sport in bringing people together is a wonderful thing. It doesn’t matter who you are or where you are from, once you’re on the pitch, on the court, in the ring or on the track, how well you do is down to the drive and talent of the individual and their team – and those valuable lessons are transferable to so many other situations in life.

“I’ve really enjoyed my time with the DOSTI project today. I hope that the youngsters I’ve met today use the skills they’ve learned to build a bright future for themselves, their families and their city.” 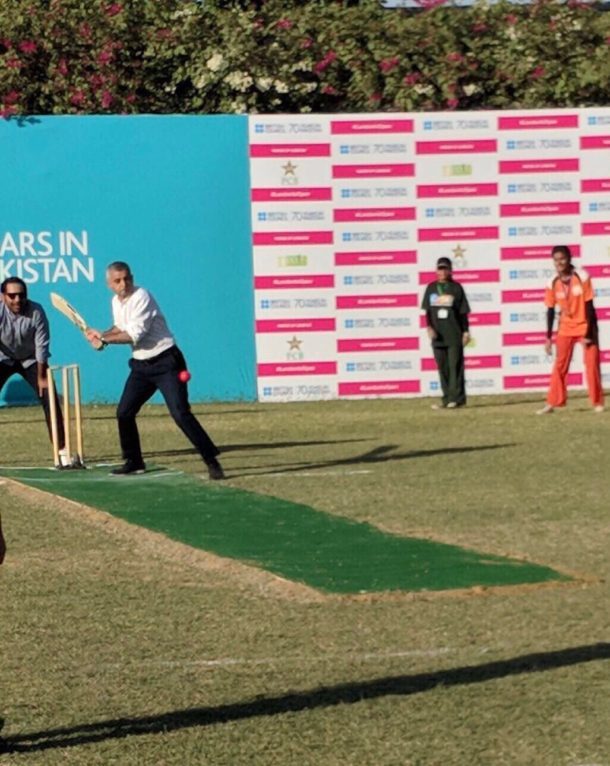 Christopher Hunt, Area Director Sindh and Balochistan, British Council Pakistan said: “It has been a pleasure to welcome the Mayor of London as we celebrate 70 years of the British Council working with Pakistan. Our programmes like DOSTI show the power of sport, culture and education to give young people the skills and confidence to fulfil their potential and achieve their dreams. Throughout our work in Pakistan and around the world the British Council is working to create trust, reduce conflict and create safer, stronger and more resilient communities.” 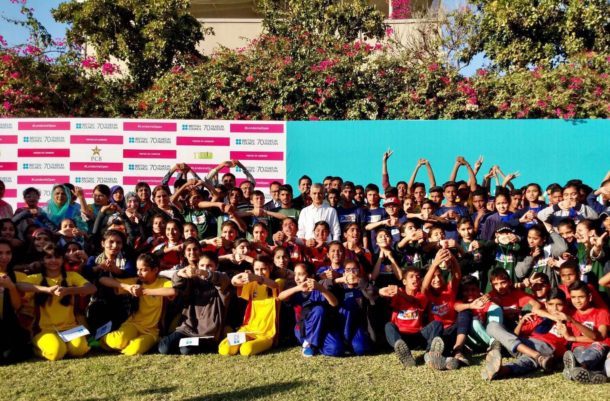 Mushtaq Ahmed, Head Coach of National Cricket Academy Pakistan and former player for Pakistan and Surrey said: “I first interacted with participants from the British Council’s DOSTI project in Lahore earlier this year when they had visited the National Cricket Academy. I was very impressed with their talent and passion. DOSTI is an amazing platform to transform their energy into something positive, especially for children who belong to humble backgrounds. It was a pleasure to meet Sadiq Khan at the British Council today and share some ideas around using sports to unleash the potential of young people in Pakistan and the UK.”

The Mayor’s visit comes ahead of an important couple of years for cricket in the UK. In 2018, the Pakistan national team will be coming to England, after drawing with them 2-2 in the 2016 test series. In 2019, England and Wales will host the Cricket World Cup.

About the British Council
The British Council is the UK’s international organisation for cultural relations and educational opportunities. We work with over 100 countries in the fields of arts and culture, English language, education and civil society. Last year we reached over 65 million people directly and 731 million people overall including online, broadcasts and publications. We make a positive contribution to the countries we work with – changing lives by creating opportunities, building connections and engendering trust. In Pakistan, we have been working since 1947.
5 years ago in Latest
Bismah MaroofBritish CouncilChristopher HuntDOSTI PROJECTKarachiMayor of LondonMedia HiveMushtaq AhmedPakistanPakistan National Women Cricket TeamPakistani Cricket TeamPunjab2000Sadiq KhanSana MirSarfraz Ahmed