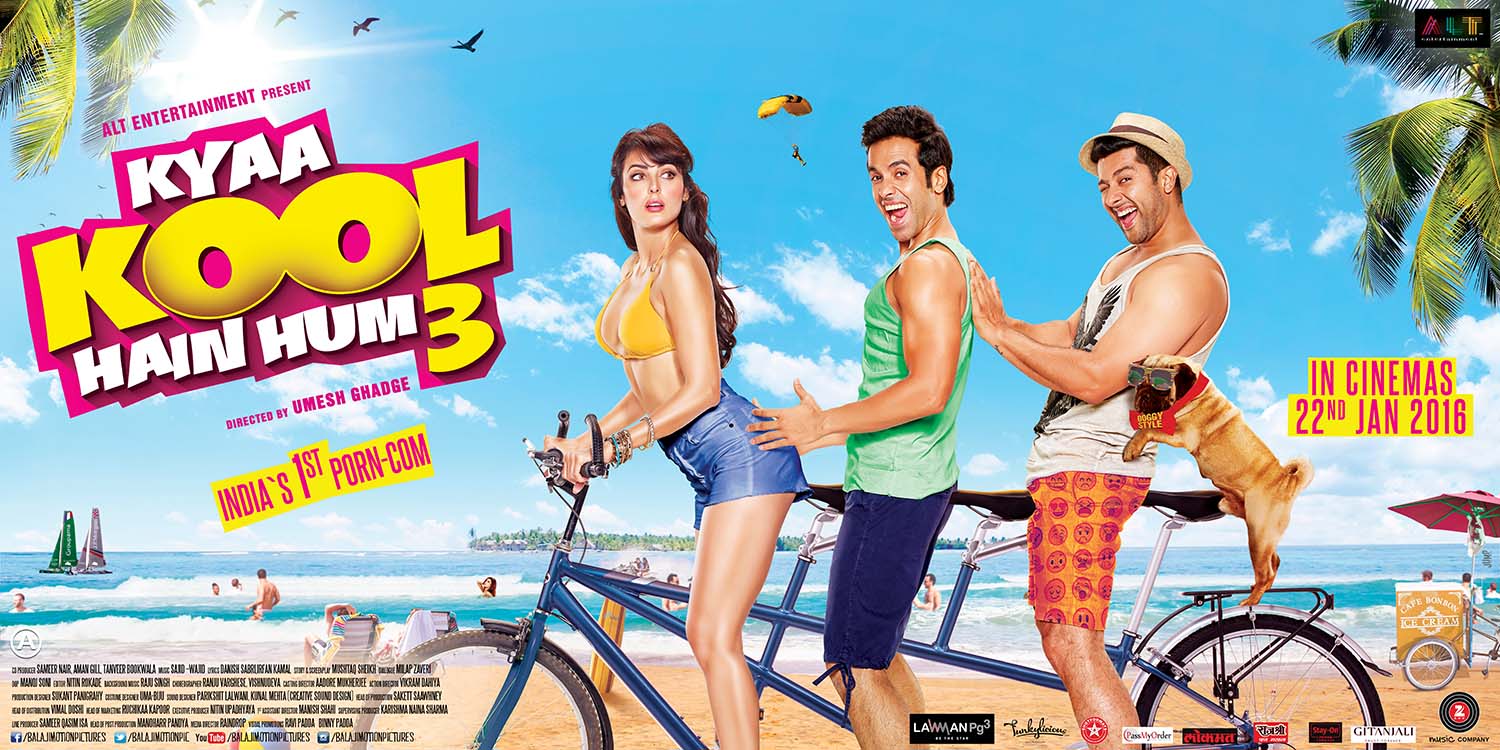 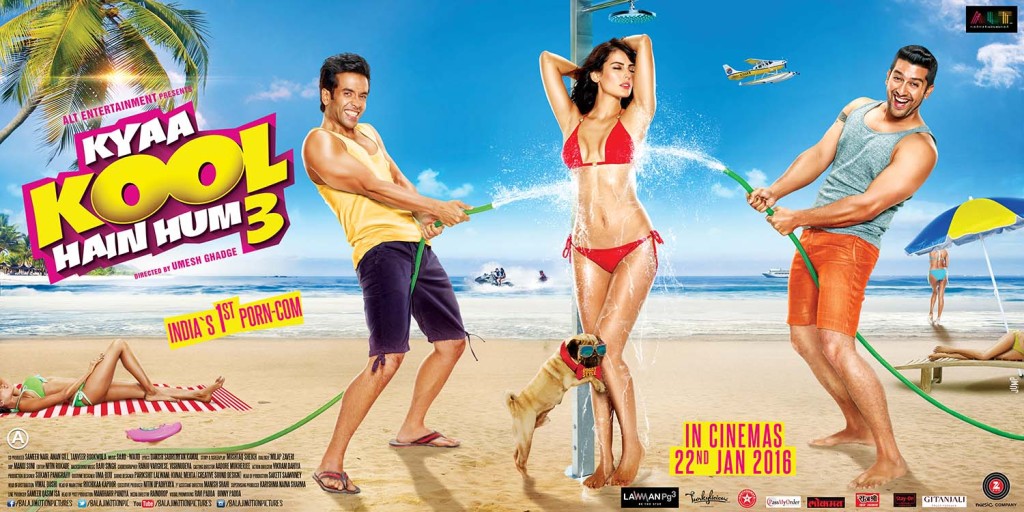 You both represent a franchise, Tusshar with Kya Kool Hain Hum, Aftab with Masti. What keeps bringing you both back into these films, is it the way that cinema has changed in allowing more content like this?

AFTAB – It is the story, the film, it is something different to show in the cinema. Yes there are other films but with this genre it gives you more to experiment from the others, as an actor you would want to do it.

TUSSHAR – Well the fact that the first 2 films have been successful, that it got me back and people have been waiting for another part. I am excited and I hope that this one takes the franchise even more ahead, a highly awaited film as the trailer has done really well. I think that is the reason why we have come back because of the love that we get from the people.

Has it become a necessity to carry what you both started with this adult comedy genre?

AFTAB – No, not a priority just happens to be a complete coincidence. I haven’t really planned so much at this point of my career. It just came up at this particular moment so it happened coincidently.

TUSSHAR – It’s not a plan but I guess whatever comes my way and whatever I think best, I do that. I just keep doing things that excited me and adult comedy is an exciting genre. It has not been explored fully; it is not new but hasn’t been worked on further fully. We should go that way and for youngsters who like these kind of films, it is stress relieving for them.

What was the first thing you asked in regards to being involved in Kya Kool Hain Hum?

AFTAB – Just the script, because I feel that at the end of the day, however much you try and create gimmicks or gags on any sort of comedy, the audience follows the script so it is down to the script. If I feel the script is not strong enough, then nothing will hold your attention beyond the first 15 minutes. So it is the script that I actually wanted to hear and from then on I was happy to make my decision.

When did this part start?

TUSSHAR – We started writing it in 2013, we started shooting in Jan 2015, so it happened within a year from shooting and I am so glad that it is finally releasing n January 22nd 2016.

Working with each other, you guys must have had some funny moments on or off the scenes?

AFTAB – Yes of course, the thing with Tusshar, is that he is so good at comedy and I have done a few comedy films too, the whole chemistry was perfect and it did not look like we both worked with each other for the very first time. So it worked out perfectly, we’ve been friends for a couple of years, hung out a lot so that just translated over to a film. Hanging out, chilling, going to the gym, going out for dinners, my wife and myself and Tusshar. We really had a great time when we were shooting.

TUSSHAR – Aftab and I are friends so we would go out, clubbing sometimes too so along with the rest of the things we did, these were the most fun moments that we would take away from the film, off set. But when on set working together was fantastic and looking at the trailers, the excitement builds up for our film together.

Tusshar, with Aftab being in this franchise for first time, did he seek any advice from you?

TUSSHAR – He has done adult comedies too, so many comedy films before, that this became a familiar territory for him. It never was a challenge for him to discuss things with anybody. He kind of just fitted into the set up and atmosphere very easily. I am sure he will be a part of many more Kya Kool’s.

How difficult was it to maintain the seriousness as an actor towards a adult comedy film?

AFTAB – The whole perception of adult comedy, it seems like everyone is just having fun and having a laugh not taking anything seriously. But that is completely wrong because once we are on the sets, everything becomes a serious business. You can laugh and joke as much as you want but at the end of the day once the camera starts rolling it becomes serious. Tusshar and I, both are extremely professional so as actors we made sure we did not really get distracted because we had a job on our hands to do. Carefully crafted funny ways, not making the film look vulgar, we were dedicated to the fact we wanted it to be funny. But we always had our fun off the sets but when it came to the movie, we were full on and serious about the whole thing.

TUSSHAR – I keep that seriousness for ever movie that I do. I don’t take comedy films or successful franchise any easier. I have that same intensity with my work. Every time a film has had it’s own challenges depending on story of the film. Everyday is a new day, I do my own, I read a lot of the script, and I research a lot. I try to talk to the director often; I just do things my own ways to help keep me warmed up. But when on set, we follow the director’s instructions and just hope to do our best.

How has your approach to such films changed from when you heard the narration of your first adult comedy film up to now this present film and of course your upcoming releases in the same genre?

TUSSHAR – Each film has had a different director, different story, and no similarity but just the same genres. All these films have had different elements including locations. It has been refreshing coming in with Kya Kool but with different directors and different setups. So you have to adjust accordingly and not just settle knowing that you can do it, we have to always warm up even if it is same build up to a film of such genre.

What was the most difficult part in shooting for this film?

AFTAB – I won’t say difficult, but in this film we have shot many spoofs of various Bollywood movies from the past. That was difficult because there were loads of get-ups and we had to spoof many of our colleagues and friends, which was challenging and nervous, as we did not want to upset anyone. It was really simple, we wanted to make sure we try and flatter our friends rather than offend them.

TUSSHAR – I agree with Aftab, the different spoofs, and the get-ups that we had to get into. They were very time consuming and it challenging. So many spoofs, there were films in the this film. Each one had it’s own requirement so that would be the hardest part of shooting this film.

Were there any scenes that you as an actor felt can be adjusted to what the writer had written?

AFTAB – Not really, because when I heard the script, I felt the entire script to be very radical. This concept that has never been introduced before to mainstream actors, like Tusshar and myself. So when I consented in doing something like this I knew I had to give it my hardest and honest effort towards a well written script like this. If we’ve made it look funny then we know we have achieved what we set out to do.

TUSSHAR – No, I didn’t feel the need, didn’t feel uncomfortable with anything, it was all very situational. It all comes singularly into the story. As we had read the script many times before, it became a part of us and we just worked on the certain boundaries and certain levels of our performances, making sure we delivered it exactly the way the script required us to do.

How much of the film has been cut down by the censor board?

AFTAB – Content wise not much has been cut off, we were very happy with the board. They are doing their job, they have a guideline that they have to follow and so do we. We respect them and they were doing their job, done what they needed to do and we are extremely happy with the cut that we have. It has made both parties happy and satisfied, nobody has completed at that front.

TUSSHAR – There have been a lot of rumours in terms of censor board cutting a large chunks of the film. But that is not true; the board has been really fair to us.

Yes there is a market for these kinds of films, but what else needs to be done in Indian cinema to try and lure more audiences to watch such genre films without criticising it because of the content inputted?

AFTAB – This is a slightly risky genre because India has not seen too many of these type of movies. Both the franchise, Kya kool and Masti films, with Grand Masti touching over 100 crore, I think that is a testimony to the fact the large section of an audience wants to watch a film like this. Also we should keep in mind you cannot impress aspects of society when it comes to such genre such film. Some won’t see as socially relevant but we are an evolving nation, I think people will see this film for the sake of entertainment and just having some fun without offending anybody. Hopefully January 22nd will make many people laugh.

TUSSHAR- We haven’t really faced any negative comments as of yet, but I think so much has been done in making this movie so positive, that people have been waiting for a good laugh. As for those who don’t like adult content and adult comedy are not forced to watch it, their comments won’t be new to Bollywood as other films have it too. Each movie has it’s own.

Finally a message from you to the readers of Panjab2000?

AFTAB – To all the readers, we have made a really funny movie Kya Kool Hain Hum part 3. I’m sure you have seen the first two parts, I can assure that this part is completely different and nothing like what you have seen before. Whatever you do, make sure you go and watch the film on the 22nd January. If you haven’t already seen the trailer, it has got over 15 million views, watch it so you know exactly what you be up for. Also it is an adult comedy film so make sure nobody under 18 age goes to watch it but have fun and enjoy, Thank You.

TUSSHAR – If you liked the first and second parts, liked the trailer of this film then you will have a lot of reasons to smile because it definitely is a happy and feel good kind of film. Go check it out and enjoy yourself.