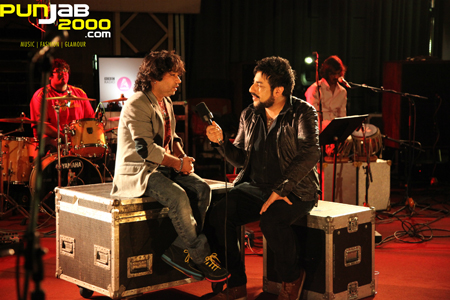 Tune in to the Friction show to hear an exclusive live session from Indian Rock/Pop singer Kailash Kher. Pre-recorded last month at the BBC’s pre-historic home of live music, Maida Vale studios, Kailash Kher and his band Kailasa put on a performance to remember, showcasing hit tracks including his lovers anthem ‘Saiyan’ and ‘Tere Deewani’ as well as a number of new songs from his current album ‘Rangeele’.

Having always been inspired by the late Qawwali singer, Nusrat Fateh Ali Khan, Kailash Kher has worked hard to make a name for himself as an Asian Music star. His musical style being heavily influenced by Indian folk music, he has sung in 18 different languages for regional films and has recorded over 300 songs for Bollywood.

The live session was filmed and will be shown on BBC Red Button from 14th May, alongside coverage of big artists Rahat Fateh Ali Khan and Adnan Sami.

As well as the performing live tracks, Kailash also talked to Bobby Friction about his latest album and upcoming projects.

Bobby Friction says: “It was a pleasure to interview an artist as talented and as inspirational as Kailash Kher.  I found him to be more than a musician & singer – he had a raging intelligence that only added to all the other qualities that we all know him for.  It felt like meeting a visionary".