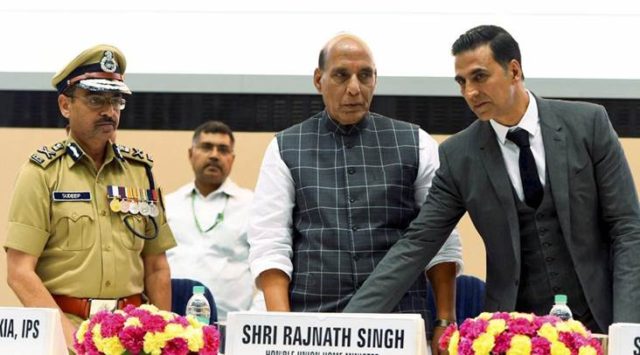 Indian film megastar Akshay Kumar is known for his patriotism not only onscreen but off, as he regularly lends his voice in support of martyred soldiers and their families, contributing towards their family’s financial aid.

In a unique and pioneering step, Akshay Kumar along with Hon’ble Union Minister of India Rajnath Singh launched an app and website ‘Bharat Ke Veer’,which enables people to contribute financially towards the families of martyrs.

After initially appealing to the public on the eve of Republic Day 2017 in India, the actor had proposed an app to enable people who wanted to support the families of martyred jawans (soldiers) financially. He had posted a video where he requested his fans to support the cause, with permissions from the Indian Army and support from the Government of India. He tweeted the videoon 24th January 2017 with the message: “Here I am standing up AGAIN for something I truly believe in coz THEIR well-being MATTERS to ME.I’d love to know if it does to YOU as well? pic.twitter.com/3Y5NPmTJhg”

Three months after launching the drive, the Government of India launched the app and the website Bharat Ke Veer.

Speaking at the launch of the app and website, Akshay Kumar said, “This website has been made exactly in two and a half months. About three months, this idea came in my mind, while watching a documentary film on terrorists, which showed how terror leaders financially support the families of the terrorist who carry out terror acts.

“Everybody wants to connect to people in uniform in their pain. It was a small dream and to fulfil this dream, our government really helped us. I want to thank everybody with my folded hands. My father was in the Army and I am here as his son. Thank-you everyone,” he added.