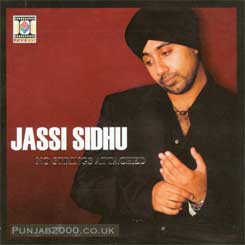 January saw the slightly delayed release of the much anticipated second solo offering from Jassi Sidhu. After ‘Reality Check’ expectations were high; not least from the man himself. I recently caught up with the ever so busy Jassi to talk about his album ‘ No Strings Attached’.

(Kam) So tell us Jassi. What have you been doing for the last two years? Briefly.

(Jassi) I’ve been gigging and touring. I also released ‘Aashiqui’ in India. It took about a year off my career but it was something I had to do. Then in about Jan of last year I started recording ‘No Strings Attached”…..

(Kam) So what can people expect from Jassi Sidhu on ‘No Strings Attached”?

(Jassi) You can expect Jassi Sidhu, you’re not going to get anything much different!! I keep saying it’s nothing too clever. It’s just a Bhangra album. It’s what a real Bhangra album should be like. With Bhangra songs. There are a few experimental tracks on there but I think there is something for everyone. I have tried to do songs which I think will appeal to different people.

(Kam) ‘Reality Check’ did immensely well for you. It has been well documented that you were going through a bit of a difficult time in your career having left B21 during the recording of that album. How did recording this album compare to ‘Reality Check’?

(Jassi) As a singer I’m getting much better with each album. As a producer I think I’m 8 years behind my singing. It’s going to take me a long time. I produced a couple of tracks on Aashiqui which helped too. As with everything, the more you do something the better you become. I’m a firm believer in practice makes perfect. The experiences of recording both albums taught me a lot. With this album it took me a year as opposed to the 2, 2 and a half it took to record ‘Reality Check’. This album gave me a few headaches along the way too. But I was a lot more confident in how to go about things. I knew exactly how to get what I wanted. It’s getting easier as I’m getting older…… and wiser Ha-ha!!

(Kam) Tell us a bit about ‘No Strings Attached’ then.

(Jassi) It’s a ten track album. It’s pretty similar to the way ‘Reality Check’ was based. I always think an album should be like a story. Your mood should change throughout the album. So basically there’s 7 new tracks and 3 remixes on there. The way the album has been laid out, every track is different to the last. Its not what you would expect from the typical ‘Jassi singing on a dhol.’ I can sit here and honestly say I’m so proud of this album. Not just because I’m happy with it. But because it just shows that I’ve grown up a lot in the last two years.

(Kam) Why did choose to try out all these different things on the album? Is that something that you, as an artist, wanted to try out?

(Jassi) You know what, a few weeks before it was released we were in Rishi Rich’s studio and I played the album to San -J-Sanj. I had all the Bhangra tracks at the start and the mixes and experimental stuff at the end. He heard the first 6 tracks and said “Your album sounds all the bloody same” . And that’s what I’m really scared of people saying. If I did 10 all out Bhangra tracks it would sound the same. So the remixes are there to break up the album. You can not have 10 tracks that sound identical. Also it’s my tenth year now in the industry. I need stuff that keeps my mind going. There’s a rock track on there that I just loved recording. It was so different recording that to a Bhangra song. There is a ballad on there too which really means a lot to me. Singing that at the time was great closure for me. Singing it was amazing, recording the orchestra, it was all just a great experience.

(Kam) What influences have you drawn upon for these different styles?

(Jassi) Well, people keep going on about my ‘English boy band’ image so I thought it would be fun to do something like that. As far as the image of a Boy band is concerned, it’s true. I grew up listening to it and still do. I always say that I should have fun while recording my albums. It can take anything from a year to 2 years to record an album. Those years can drag if your not having fun whilst recording it. If I listen to a track I’ve done I should be able to have happy memories of recording it. The Bhangra stuff isn’t really influenced by anything. I remember whilst driving around the country once when one of my band members said to me ‘Jassi, You make Massi Music’. I said ‘What the hell is that supposed to mean?” He said ‘It’s the kind of stuff your Massi would dance to, or your Poa would dance to at a wedding”. And to be honest I’m so proud of that. To know my music has a universal appeal that different generations can enjoy it means so much to me. The older generation isn’t really into the ‘Urban changeover’ in Bhangra, so if my music appeals to them as well as the new generation then that’s a good thing. My music has no age restrictions in that sense.

(Kam) Let’s just talk about the name. Is there any significance in the name ‘No Strings Attached’?

(Jassi) I think the significance in the name, more than anything else, is that I’ve been a solo artist now for four years. I think now…..I am Jassi Sidhu. Before I used to be the guy in the ‘boy band’ or whatever. But now I have my own identity. There are no strings attached. This is Jassi Sidhu. Worldwide, everyone knows the name. So that’s all it is. This is me, I’m not controlled by anyone. ..No strings attached.

(Kam) Do you think you are finally moving away from the “ex-B21” member?

(Jassi) I think I am moving away from it but I don’t ever want to be completely distanced from it because I’m very proud of it. I am proud of what I did. But I am now Jassi Sidhu- the solo artist and I have been for 4 years.

(Kam) You mentioned you have been in the industry for ten years now. Have you still got the same ‘Get up and go’ kind of attitude you had when you were starting out?

(Jassi) You know when people say ‘Yeah I have” they are lying. Because as the years go by you see the same things over and over again. It can get a bit stale. But I have learned from friends in the industry that once in a while you have to clear your mind and refresh yourself. After recording half of this album I was like “I can’t do this any more”. But then all you have to do is take a break , go on holiday and you find you come back with new ideas. But some tracks on the album, like the ballad or rock song, I felt like I was on caffeine, so hyped up, just couldn’t stop listening to it when I got home. I do still get that buzz at the end of an album. It’s unexplainable when you see the final product after all the headaches. It’s great.

(Kam) Going back to the album, you did most of the production on ‘Reality Check’. Who produced the tracks on this album?

(Jassi) It’s me again. I did most of the tracks again regardless of what people might say. There is a track that I co-produced with Jim Lantsbury from Kamlee studio’s. Rishi has also done a mix for it. It’s very similar to the outline of ‘Reality Check’ because I felt I got that right.

(Kam) What happened to the idea of doing a double CD that you told me about a while back?

(Jassi) I think what put me off that idea was I was reluctant to do a ten track, full on Bhangra songs album. I was really getting paranoid about it. It was just a idea I had at the time because I was worried about doing too many “Bhangra’ songs. I don’t do Urban. I don’t know how to do it. So thought It would be better to get Rishi in for the remix on this album rather than do ten Bhangra songs and ten Urban songs.

(Kam) ‘Reality Check’ was your springboard into the India Market. How important is that market to you as artist?

(Jassi) Ok….people go to that country to make money from shows. In all honesty. In 2003 when I released ‘Reality Check’ People were harping on about the Mainstream and I remember saying to you then that our mainstream is India. People are going to sooner or later realise that the western mainstream don’t really want us that much. They will take what they need, they got Rishi and PMC, they enough of the flavour they wanted. Now, every artist and their mother are in India every other week trying to push themselves on T.V and make a name. For me, it’s not so much about the shows because I’ve only done 1 show there. I preformed at the Punjabi music awards. For me, it’s …..this might sound a bit corny but it’s for my parents. The fact that now they are actually proud of what I do. Before they were like “Yeah my son sings” or whatever but now, my family in India know me as an artist. My songs are always playing on Alpha Punjabi. I think now my parents are coming round to the fact that I’m a singer. After ten years. For me it was more to do with that. You do get a lot more respect for being a household name in India than for being a household name in the U.K. People always say it’s good to be known in your own country but people forget that I’m not from India, I’m from England. Whatever anyone says, we are second, third generation Asians from England. Our roots are in India. But India is not to me what it is to my parents. The U.K is my home. I am so proud of every British-Asian that produces music.

(Kam) How do you feel British born Asians are received in India?

(Jassi) Very well to a certain extent. It’s so easy for the older generation to sit back and say this person or that person can’t speak Punjabi. I can’t. My Punjabi is awful at times. There are 4 mistakes on my album that I can pick out myself. But my argument is, you take a kid from ludhiana and get him to sing an English song. There will be mistakes in there. It’s their second tongue. Punjabi is our second language realistically. We are all trying so I don’t think we can be knocked for what we do. Interestingly those criticisms come from the U.K, not India.

Coming Up in Part 2: (Jassi) “…With any criticisms you always consider the source first. If that came from Sukhsinder Shinda or Jazzy I’d understand but the guy is totally right in what he said. So I’d like to say thanks a lot mate. There are 4 mistakes on my album. Please point them out to me.”