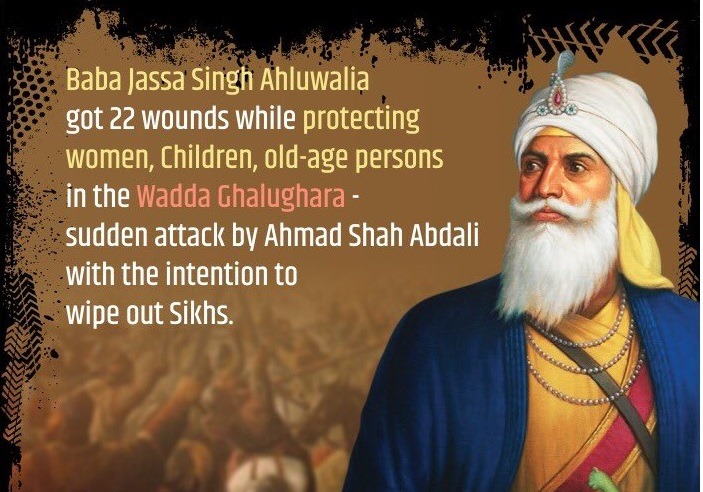 Wadda Ghalūghārā (ਵੱਡਾ ਘੱਲੂਘਾਰਾ)
The greater holocaust where circa 30,000 Sikhs died in ONE DAY.

5 Feb commemorates the day when the Khalsa panth was decimated by the forces of the Ahmad Shah Abdali, the Durrani ruler of Afghanistan. Abdali had made many raids into India, in 1761 he nearly finished the Mahrattas. He desecrated the Harimamdir Sahib several times, and cartloads of heads were sent to Lahore (Gurdwara Shaheed Ganj marks this location).

The Sikh Misls or units of Khalsa Warriors also known as the Buddha Dal and Taruna Dal fought against Abdali in his many conquests in India. Carrying off the treasures of India, enslaving women, the Indians lived under harsh conditions, with the Mughals becoming subservient to the Shah.

On the day of the attack (February 5th,1762) Zain Khan (Governor of Sirhind) attacked with his 20000 men and artillery. Abdali also joined the attack with 30000 horsemen. Jassa Singh Ahluwalia, Head of the Buddha Dal commanded Charat Singh (Sukerchakia Misl, grandfather of Maharajah Ranjit Singh) to encircle their womenfolk and kept proceeding towards Barnala as a war strategy. Charat Singh’s only aim was to save their women folk somehow and fight with the enemy to inflict maximum losses on their end.

Rattan Singh Bhangu says “Fighting while moving and moving while fighting”, they kept the baggage train marching, covering it as a hen covers its chicks under its wings. More than once, the troops of the invader broke the cordon and mercilessly butchered the women, children and elderly inside, but each time the Sikh warriors regrouped and managed to push back the Afghans.

Circa 30000 Sikhs: men, women and children were shaheed. Jassa Singh was inflicted with 22 wounds and Charat Singh with 19. Every Sikh Misl played their part in this battle.

Within months the Khalsa regrouped and attacked Zain Khan and Sirhind, they made terms and in 1764 they killed the Governor. Baba Ala Singh (Phulkian Misl) was given the territory with many other parts divided amongst the other Misls. From this period on the Sikhs were on the offensive leading to the victory (Fateh Diwas) over the Mughal Government in 1783. Abdali continued his raids but the Sikhs kept on attacking him leading him to give up on India. The Khalsa had effectively saved India from Abdali by shedding their blood.

The location where this massacre took place is Kup Rahira, located approximately 12 Km north of Malerkotla in the Punjab.

Share this important event. Tell your children how we nearly got wiped but our faith in the Guru’s and our scriptures carried us through this testing time.