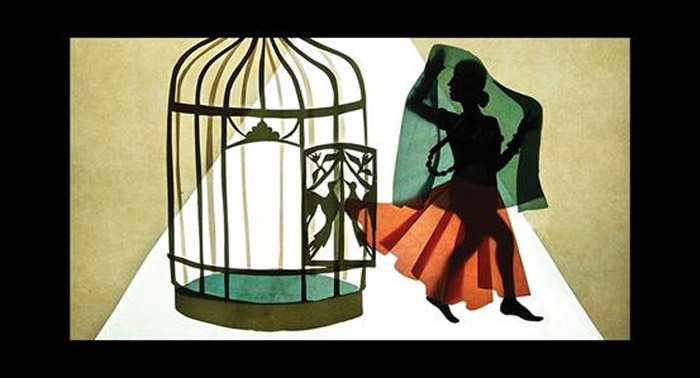 A vast, open hall – the meeting place for wealthy Nawabs – decorated in gilded carvings and seeped in the opulence of the Mughal period. Taking centre stage, the courtesan, or the Tawa’if, a figure who embodies a world of refinement through her poetry, music and dance, prepares to entertain an eager crowd…

As the first recording artists of the British Typewriter and Gramophone Company (which later became known as HMV), the life and culture of courtesan tradition is long, complex and transformative. But who exactly were the Tawa’if? Ubiquitous in India during the Mughal period, the Tawa’if began their careers as educated, cultured entertainers, who taught the children of the elite, however, as the influence of the British reigned down heavily, perceptions changed and the profession slowly dwindled into an underworld of prostitution.

While India’s courtesan culture has long died out, it has not been forgotten. Stories from the period have worked their way into literature, stage performances and most notably, Bollywood. Indian cinema often gives birth to the tragic tales of India’s most prominent courtesans, who have inspired blockbuster hits. In particular, the story of Umrao Jaan, the most sought after courtesan of the mid-nineteenth century, has travelled across generations through books, theatre and cinema.

Now, a stage adaptation of the hauntingly beautiful legend is being brought to you by The Asian Music Circuit (AMC) as part of a dedicated season about 19th Century India. Originally an Urdu novel by Mohammed Mirza Hadi Ruswa published in 1899, the story of Umrao Jaan is being brought to life once again in London’s Cockpit Theatre, and George Square Studio One Edinburgh Fringe Festival. The intimate space will allow audiences to experience the cast’s breath taking performances, and immerse themselves into the glorious culture of the 19th Century courtesan period.

Commissioned by the AMC, the play has been re-written in English by renowned author and poet Simon Mundy for a new generation of audiences. Directed by Vasilios Arabos, the play is interspersed with beautiful music composed and directed by Viram Jasani in the traditional style of thumri and ghazal. Using contemporary theatre techniques, light, sound and live music, Umrao Jaan will be given the makeover of modernity, yet will still retain its traditional Lucknowi culture with its beautiful poetry, stunning music and captivating Kathak dance sequences.

This theatre adaption is part of The AMC’s Lost Traditions season of events based around 19th Century courtesans in India. Through a series of spectacular experiences, including an exhibition and concerts of Thumri, Ghazal and Qawali concert, The AMC aims to answer who the Tawa’if were, how their role in society was defined and even looks at their journey from “salons to the concert stage.”

Viram Jasani, from the AMC, the producer of the Lost Traditions season, comments: “Mughal India is one of the most interesting periods in history because it is immersed in so much culture and opulence. It’s fascinating to think about how the courtesans slowly became outcasts in society as a result of the impact of the English presence in India and Indian conservative society. Not many people are aware of their noble beginnings. Of course, a lot of people in India are familiar with the story of Umrao Jaan – one of the most iconic stories in courtesan history.  I felt it was time to bring it to the UK in a very different way. I feel honoured to be working with Simon Mundy and Vasilios Arabos. They are both esteemed contributors to their respective industries and have really helped me bring this project to life. I can’t wait to share it with audiences in London and Edinburgh.”

Umrao – The Noble Courtesan will open on Wednesday 22nd July through to Friday 24th July 2015 at The Cockpit, Gateforth Street, Marlylebone, London,NW8  8EH