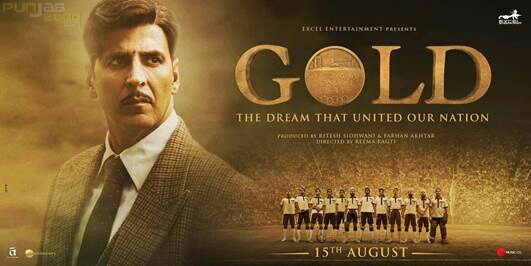 GO FOR GOLD: TEASER OF AKSHAY KUMAR ‘GOLD’ IS OUT NOW

The first teaser trailer for the Reema Kagti directorial GOLD, starring international megastar Akshay Kumar, has released after weeks of anticipation ahead of its official launch on Independence Day, 15th August2018.

With the clip lasting just over one minute, audiences caught a glimpse of what they can expect from the Ritesh Sidhwani and Farhan Akhtar Excel Entertainment production, which is sure to be on the podium for the most patriotic films of 2018.

Bringing alive the glorious history of Independent India’s first Gold Medal at the Olympic Games held in London 1948, the actor plays a fiery fictional Bengali character, Tapan Das, who has a burning infatuation for his country and the sport of hockey.

True to his pioneering spirit and combining the perfect mix of patriotism and passion, Akshay Kumar’s character is responsible for leading the post-British Indian Olympic team to their first gold medal since achieving independence in 1947. 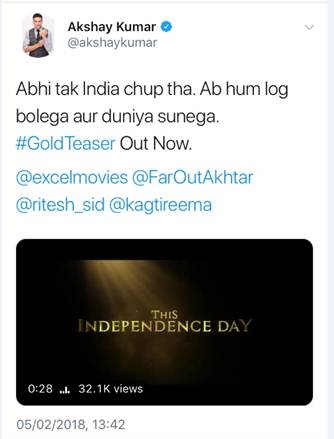 Inspired by true events, the story captures the emotional journey of a nation celebrating its right to be seen and heard as an independent state, achieving a dream which will unite an entire country.