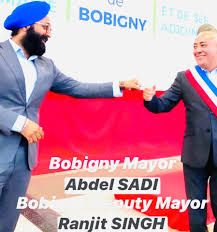 Major  achievement for French Sikhs that where the turban is banned in schools and colleges, a young Sikh wearing a turban is elected as Deputy Mayor.  For the first time in the history of France, a deputy mayor has been elected in the election of a turbaned Sikh municipality. Ranjit Singh Goraya, a young man […]

The Koh-i-Noor Diamond in 3d: Using technology to reclaim history

A very famous diamond, but what is the history behind it? How can technology bring Sikh artefacts alive? History The history of the Koh-i-Noor or ‘Mountain of Light’ diamond is steeped in myth and anecdote, wars and political intrigue. The diamond was described in 1628 as forming part of the Peacock Throne of the Mughal […]