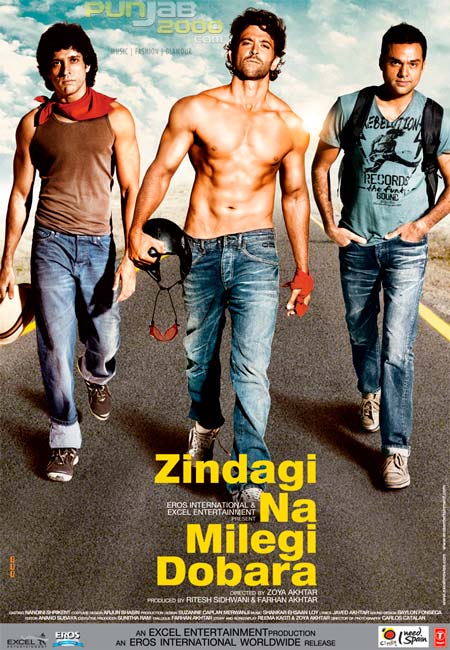 3 YOUNG MEN TAKE A HOLIDAY THAT CHANGES THEIR LIVES FOREVER.

6 months later they are engaged.

He wants to go on an extended bachelor party, a 3-week road trip with Imraan (Farhan Akhtar) and Arjun (Hrithik Roshan), his two best friends since school. The only problem is Arjun is too tied up with work. After much emotional blackmail and cajoling the boys set off on a journey they were meant to take after college but never happened – a road trip where each one gets to do the ultimate sport of his choice and the other two just have to do it with him, whether they want to or not!

Kabir, Imraan and Arjun meet up in Barcelona and set off on an adventure that will not only make them iron out their differences but also face their fears, alter their perception, unravel their fabric, force them to break out of the box and teach them to seize the day.

In other words, a holiday that will change their lives forever.

Abhay Deol as Kabir – A wealthy, young man who works with his father's construction company in Mumbai. Kabir is bright, articulate and polite. Engaged to Natasha and off on his bachelor trip.

Hrithik Roshan as Arjun – A financial trader who works at a huge firm in London. Arjun grew up without a father and seen tough life, his entire focus is to get bigger, better, faster. Reluctant to leave work. He agrees to go on this holiday.

Katrina Kaif as Laila – A bohemian fashion student from London. She takes time off to teach diving every year. This year in Spain. She meets up with three young men from India.

Kalki Koechlin as Natasha – A filthy rich daughter of a hotelier. She is an interior designer and in love with Kabir. She is slightly nervous about this bachelor trip.

Farhan Akhtar as Imraan – A copy writer who works at an advertising agency at Delhi. Imraan is the bohemian, a closet poet. He is looking forward to Spain.