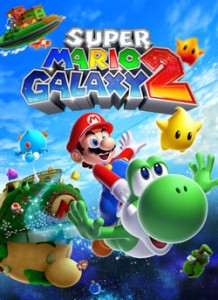 It might be easy to look at the cover of Super Mario Galaxy 2 and immediately think that the game is just going to be like any other sequel infecting the shelves of game stores across the world. It doesn't help that as soon as you've pressed start to play, it's not at all clear whether you've bought a new game or a clone with the number 2 slapped on the cover. Stay with it though, and give it a chance and you'll be pleasantly surprised.

Let's not forget that this is a Mario game, and over the past 25 years it's gone from strength to strength, mixing new with the old. This time around, there are new additions in Mario's latest adventure – some small and expected, such as new power-ups, and some which really do enhance and make gameplay different such as Yoshi's much-welcome return. But Super Mario Galaxy 2's true success lies in not forgetting what attracted gamers to the Mario games before it; the pure experience of jumping from platform to platform and hoping not to die in a bottomless pit.

It's simple, but it works and Nintendo haven't tried to mess with this principle. Instead, they take the core gameplay and shape an inventive, rewarding and entertaining adventure around it. The classic mistake that developers make is thinking that radical change is always for the better. I'm looking at you, Sega.

The levels themselves have a lot of different objectives and none of them will make you groan out loud with frustration. That's not to say that the game is easy, but the game is so fun and so creative that you won't mind falling down a pit time and time again. It helps that the visuals are clean, colourful and will suck you into the Mario universe.

The theme of mixing old and new is apparent in every element of the game, but it becomes even more clear in the music. Old fans who played the original Mario Bros back in the 80s will have a smile brought to their face when they hear the orchestrated versions of classic Mario tunes while there's still enough new melodies that will become classics in their own right.

Most sequels of fantastic games take the good ideas from the first game, mangle them in an effort to try and make them "fresh" and "exciting", shove them into a rushed botched up excuse for "entertainment" in the hopes that the fans of its predecessor will take the bait and end up shelling out £40. But you can't consider yourself a true Wii owner unless you have this game. Besides, isn't it about time you had a decent game for that console?

The Bottom Line: All of the levels have a lot of depth to them, with each objective getting progressively difficult but no less fun which means that this game is a crowd-pleaser, whether you happen to be eight years old or twenty-eight years old. The Super Mario franchise is one that's moved away from its classic 2D style without alienating any fans of the older, first generation games and this latest addition to the Mario collection will not disappoint. It's a definite buy.