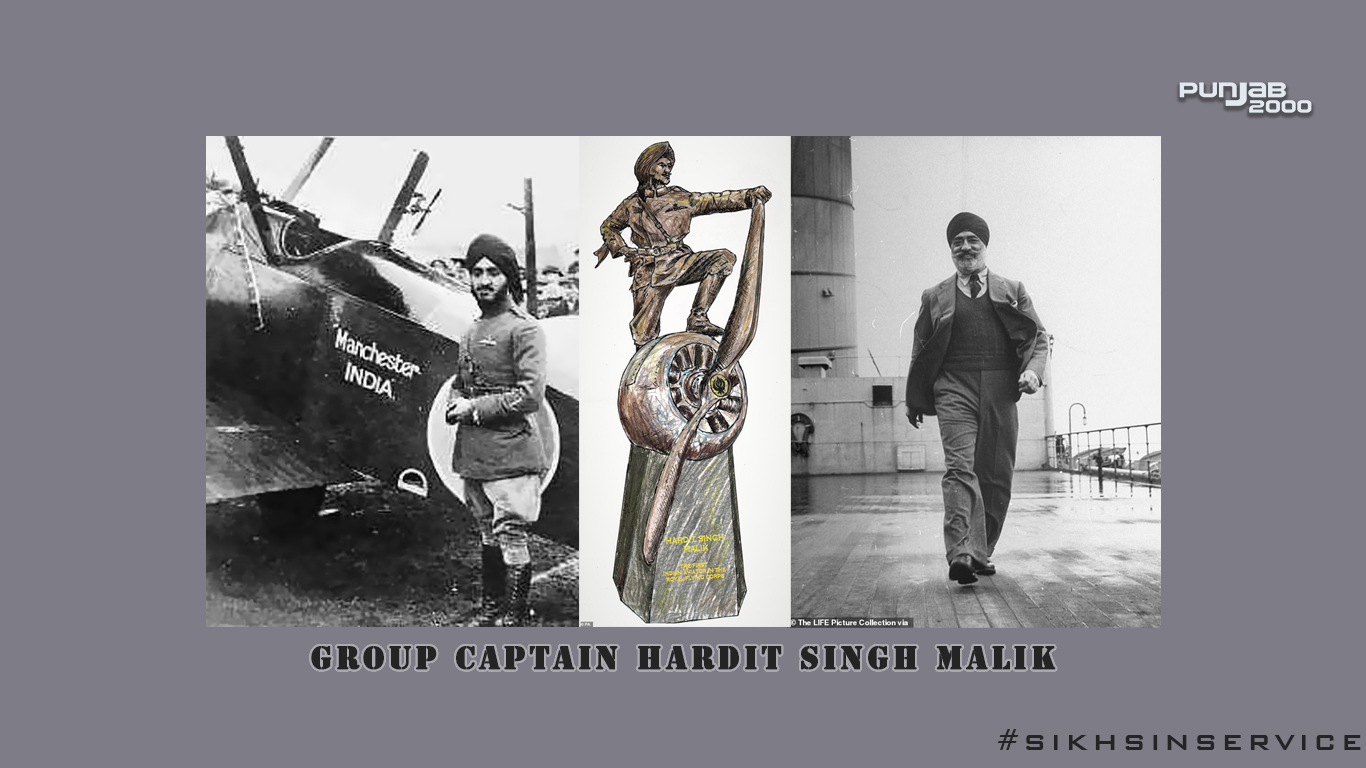 Group Captain Hardit Singh Malik, was the first Sikh to fly as a pilot with the Royal Flying Corps. On October 26, after the shooting down of a German aircraft, he was wounded and crash-landed behind Allied lines – his aircraft was found to have suffered more than 450 hits!

Group Captain Hardit Singh Malik later on went to become the prime minister of the of the Punjabi city of Patiala in 1944 and later ambassador to France.

One Community Hampshire and Dorset (OCHD) and the Southampton Council of Gurdwaras has approved the design for the monument which will be created by West Midlands-based artist Luke Perry. The statue will be ready for April 2023, in time for Vaisakhi.

Lord Rami Ranger, chairman of the British Sikh Association and OCHD chief patron, said: ‘I am truly overwhelmed by the striking beauty and power of this exceptional design of the memorial, which captures the spirit and endeavour of this great RAF fighter pilot, Hardit Singh Malik, so well.’

Pritheepal Singh, OCHD director, said: ‘I am absolutely delighted with the final design.

‘It testifies to the major contribution our Sikh and broader ethnic minority communities have made to our country, as we live in such a vibrant multicultural society here in Southampton.’

Group Captain Hardit Singh Malik, was fondly known as the ‘Flying Hobgoblin’ because he wore a specially designed helmet that fitted over his turban.

Barker had won the Victoria Cross and had 33 enemy ‘kills’ to his name, the highest of any First World War pilot.

Mailik joined Barker on a mission in October 1916 to shoot down German ace Manfred von Richthofen, who was famously known as the Red Baron.

Hardit was hit in the leg but was able to shoot down the pilot who shot him.

Once he landed, bleeding and exhausted, he found that his plane had been hit by more than 400 bullets.

The life of Hardit Singh Malik: the ‘Flying Hobgoblin’

Hardit Singh Malik was born into a noble family in the Punjab region of India in Novembe 1894.

He grew up with a ‘lavish house, good food, horses and carriages, servants galore, private tutors and money’.

Malik was sent to England at the age of 14 and went to school at Eastbourne College before studying history at Balliol College, Oxford.

Although 1.2million Indians fought in the First World War – with 70,000 skilled – Indian pilots were virtually unheard of

Malik’s tutor at Oxford was said to be outraged when he revealed in 1916 that he was going to join the French air force.

So the professor instead wrote to the commander of the Royal Flying Corps and Malik was given an ‘honorary’ commission as a 2nd lieutenant, flying Sopwith Camel biplanes.

In an interview more than 65 years later he said: ‘It was the greatest luck. They shot all they had at me but not a single one hit me or any vital part of the plane.

‘I definitely thought I was going to be killed. My mechanic said it was quite amazing how I ever got down.

‘It was like a miracle. My pursuers just did not have the bullet with my name on it.’

Two bullets remained in Malik’s leg for the rest of his life.

He went on to serve with 28 Squadron in Italy before being based at Biggin Hill, in Kent, where he flew Bristol F.2 fighters.

He was officially credited with two kills but claimed six.

Malik was one of only four Indians to fly with the RFC.

The ace went on to have three children after marrying a lawyer.

He joined the civil service after the war and from 1938 he was trade commissioner to Canada and the US> He then became prime minister of the Punjabi city of Patiala in 1944.

After Indian independence was sealed in 1947, Malik became the country’s first High Commissioner to Canada and went on to be India’s ambassador to France.