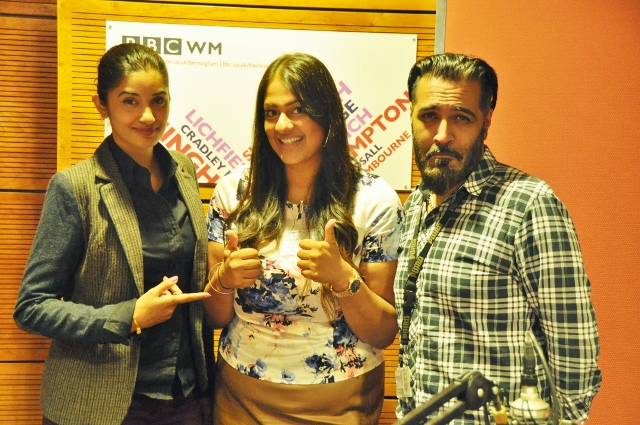 Miss Amaretto’s World from Punjab2000 meets up with Sunny and Shay Grewal at the BBC studios in Birmingham about their brand new Youtube sitcom that has recently been picked up by the UK’s biggest British Asian TV channel, Brit Asia TV. 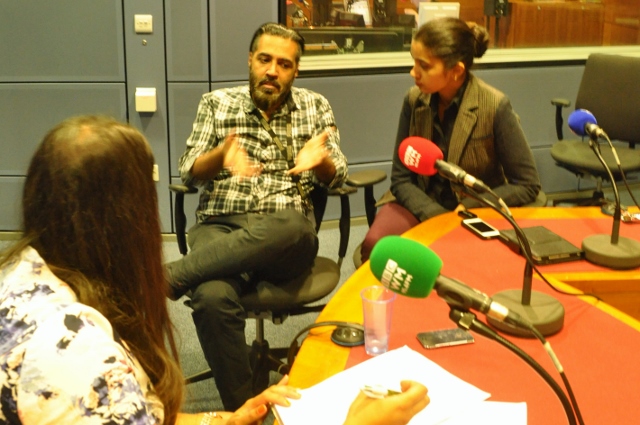 The British style sitcom pays homage to the likes of Only Fools and Horses and Faulty Towers. Inspired by the everyday on goings of married couples and family life, this two-series comedy is not just about Desi realisms, that let’s face is we can all relate to; If it’s not your parents swearing in Punjabi,  there will always be someone asking for a cup of Indian tea! However the series aims to touch on the aspects that occur in everyone’s day-to-day lives. 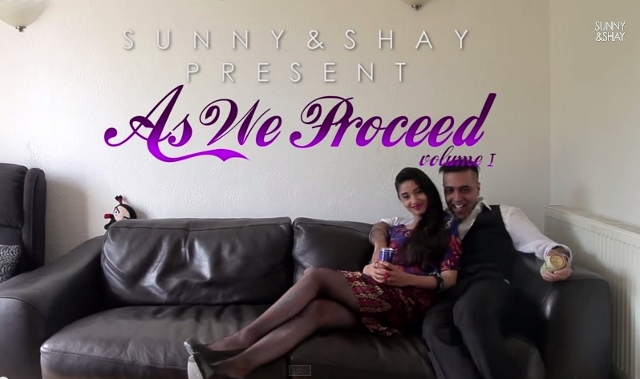 Sunny and Shay in the opening credits of As We Proceed

Five times Queen’s Award-winning Asian drinks company, Bulldog, were approached to be As We Proceed’s official sponsor, featuring Sunny opening a can of the taurine-powered drink during the opening credits along with a Bulldog billboard image the end. As a result of the sitcom’s 1800 plus subscribers, a further three companies were keen to support the upcoming comedy hit and promote their businesses. Chardae make up stylists, Super Singhs vegetarian pizzas and clothing brand Blessed are now also sponsors of As We Proceed.

It was predicted by the acting couple along with the creative genius who co-directed the series, MadTatter Films, that within a few months the Sunny and Shay Youtube channel would have around 500 subscribers and a few hundred views. To a great surprise, within three months As We Proceed hits over 1800 subscribers, topping more than 80,000 views. 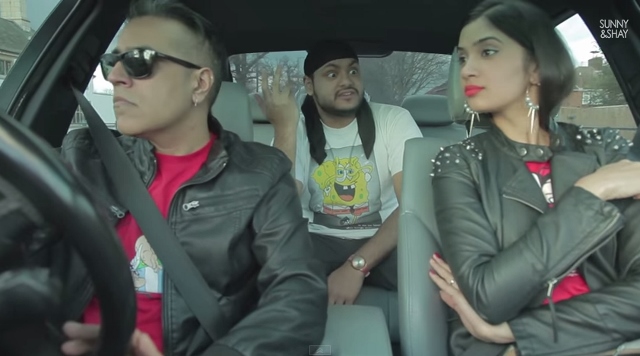 Sunny and Shay in AWP alongside MadTatter playing role as Deep

Sunny and Shay worked alongside the third member of their team, Tandy Tatter who co-directed As We Proceed with Sunny. Tatter’s cinematic expertise created a TV series feel to the short comedy sketches with canned audience laughter and special effects. Tatter also makes appearances throughout the series as the character named, Deep. Guest appearances in episodes by Humble The Poet, Mum, Dad, Tindy and the children are also ones to look out for.

Read more about As We Proceed and the geniuses behind it…

Shay:  About 2 years ago we were approached by different people saying we should be seeing The Family on Youtube and I kept pestering Sunny saying yeah I think it’s a really good idea we should do it. Sunny was totally against the idea of just doing a blog because at the time we were mastering our craft on the radio and he wanted us to be showcasing something a little bit different if we were to go on Youtube. At that point he came up with ‘As We Proceed’

Sunny: The idea came about because me and Shay were talking to a lot of directors and story tellers and what have you, and they were like we like it, we like you. But they couldn’t sell me and Shay as actors to anyone at that stage. We didn’t have any references or credits under our belts. So I said actually I’ve got an idea which was to write a sitcom. And from that sitcom we dissected it and we have little clips which make ‘As We Proceed’. With this as well I’d like to say it doesn’t have to be an Asian couple, a white couple or a black couple. It’s about a married couple going through their daily lives. And that is what the sketches replicate.

Shay: And once we had the sketches we really need someone who wanted to be a part of it and be a part of the team and film it. And that was MadTatter.

2. How did you come across MadTatter?

Shay: We really enjoyed some of his work with Inkquisitive and iiSuperwomanii. We met him and did an interview with him, and likewise he was a big fan of The Family. So we said to him, why don’t you come round for tea! So he came over, was very excited and I remember his very words being “Oh my God! I’m on the set of The Family”. To which we were like “errrm this is our house” *laughs*. It was a two way thing – he really liked us. We really liked him. Sunny told him his idea and he turned around and said “YES I want to be involved”.

Sunny: So this was my thinking behind it. Me and Shay are together and we’ve been through a lot. And that’s not to say we aren’t still going to go through a lot, because this is what married couples do. So it’s a way of saying this is a segment of our life and we are still proceeding.

The beauty of ‘As We Proceed’ is that it doesn’t always have to concentrate on me and Shay.

4. The type of comedy portrayed in the series is very real and relatable, is it based on your lives? What inspired you to create this series?

Shay: Well yeah like Sunny said it’s not just our life it’s what married couples experience and what comes with that. A lot of the episodes don’t just feature us but the family too. So like the episode ’24 Minutes’ where Dad supposedly has work early the next day, but the family were out the whole time!

Sunny: *laughs* That’s it. Such a familiar situation with so many people. As We Proceed is a combination of everyone’s stories.

5. How did you set about filming it, in one go or bit by bit? How long did it take?

Sunny: It’s an ongoing process. There are 25 episodes in each of the two series, and season 3 won’t even be hitting you guys till next year!

Shay: What I am going to say is… the grand finale for the final series is like WOW. You’ll understand when you see.

6.       You’ve obviously been involved with filming before with ‘The Family’, how do you find being in front of a camera for something you’ve had to rehearse for?

Sunny: I’m completely fine with it. Once I’m in character I know what the scene needs.

Shay: Sunny is a real natural in front of the camera. Mum is another natural. I would say I’m a director’s actor where the director tells you what to do.

7.       The two of you come as a package, but how did you find working with a third team member?

Sunny: We do come as a package but we very much do things separately as well. Shay is really into her radio, she’s got a really beautiful radio voice. So when it comes to editing and directing that’s me, I do that. We have our strengths and our separate skills.

Shay: We have a common goal but we support each other in our separate ways. So Sunny has his own film column in Asian Culture Vulture. His passion is film, mine is music. When we work together I’m very much the producer whereas Sunny thinks outside of the box.

Sometimes, I feel sorry for Tandy. Tandy’s like the third wheel when me and Sunny can go off on one. We’re not the kind of couple who need to continuously latch off each other but at times it can be a case of “okay come on guys”. But what he’s said he loves about that is, as a couple once we’ve worked out what we have to do, we’re ready to move on.

8.       You’ve been picked up by Brit Asian TV. How does it feel knowing that nearly every Asian in the UK is watching you, as they get the exclusive every Friday?

Shay: My God. It’s kind of like the second time round really isn’t it? Because when The Family came out we were like “wow quite a lot of people are going to see this”, which turned out to be around nearly five million views every week on the show! And that now is like hundreds of millions because it’s viewed in Dubai, Australia, all over. So for us it’s similar for us knowing it’s on in everyone’s homes but the difference is we’re acting.

Sunny: Yeah it’s all acting and fantasy. To a certain degree they are scenes where everyone can relate to. You don’t have to be a couple or relationship to understand it. So my favourite scene is where I get to be a superhero!

Shay: That’s it so we really wanted to tap into those small idiosyncrasies that everyone goes through in life. And for us it’s documenting it and having fun with in because everyone like Mum, Dad was involved in it. And when Tandy came in, it really took it to another level. I call Sunny and Tandy ‘creative beings’. These two will just go off on one and jump to the next idea and the next.

9.       Youtube comedy is massive phenomenon at the moment, how would you describe your comedy to be similar or different?

Sunny: Anything we’re producing is a homage to old-school TV comedies but condensed versions.

Shay: The homage is to shows like Only Fools and Horses, King of Queens. We’re great fans of Faulty Towers and all that kind of stuff. We might be Indian and Desi but what As We Proceed is about reflects real British comedy. The humour is witty!

10.   What is the most enjoyable part of filming the series?

Shay: For me it was the actual filming. We were on a tight schedule as we started filming the next day after Bhangra Showdown. So mum was there on hand to make sure we had food ready and helping us out. Sunny’s a real director’s director. His passion really drove Tandy and I without a doubt. And these guys love editing!

Sunny: Working with Tandy was great. We were editing together. And if there’s something we wanted to do but couldn’t, we’d look at it together. Like the homage to 24 where we added the clocks in with the 24 minutes to get up the stairs in episode 8.

Shay: I didn’t realise how much of a producer I really am. With me I will look at things logically and try work out the best way from A to B. So these guys call me ‘Shay After Dark’ when my crazy ideas come after all the nitty gritty, trying to make everything work, and all the behind the scenes stuff.

For me, the moaning when I’m trying to get ready. I was expected to be ready on top of cooking for these guys!

PC or MAC?
Sunny: MAC
Shay: both but more MAC